AT&T (NYST: T) is the first stock I ever owned. My grandfather bought me five shares when I was born.

Information on AT&T’s stock price doesn’t go that far back – apparently because I’m ancient. And the company was forced to spin off the Baby Bells in 1984.

That comes out to a compound annual growth rate of 10.9%, which is pretty solid for a boring company.

Let’s extrapolate and assume that AT&T returned 10.9% per year in the years between 1984 and when Baby Marc was born.

Because of the awesome power of compounding and how much more it adds with each subsequent year, $294 would have turned into $42,358.

Unfortunately, I sold those shares in my early 20s, probably happy to have a few extra bucks in my pocket so I could take a break from Ramen noodles for dinner.

In years past, AT&T was called a “widows and orphans stock” because it was an ideal conservative stock for people who couldn’t afford to lose money. The company had nearly guaranteed cash flows, which supported its stock price and dividend.

Today is a little different. AT&T has more competition, but it still generates plenty of cash.

The stock is a current recommendation in the Oxford Income Letter, so I clearly believe in it. But it currently doesn’t have a particularly high SafetyNet Pro rating. However, as I’ll show you, I’m not at all concerned.

AT&T’s rating got dented because AT&T’s free cash flow dropped in 2013 and 2014. Companies with declining cash flow get penalized by SafetyNet Pro. That’s because we want to see cash flow increasing so that the dividend can be paid and raised.

Also, when cash flow slipped in 2014, the payout ratio – the percentage of cash flow that is paid out in dividends – was too high. That’s a warning sign that if cash flow continues to fall, a company could have problems paying the dividend.

The good news, however, is that cash flow is back on the rise this year and is projected to grow again next year. This year’s payout ratio should be well within my comfort zone… and next year’s should be even lower. 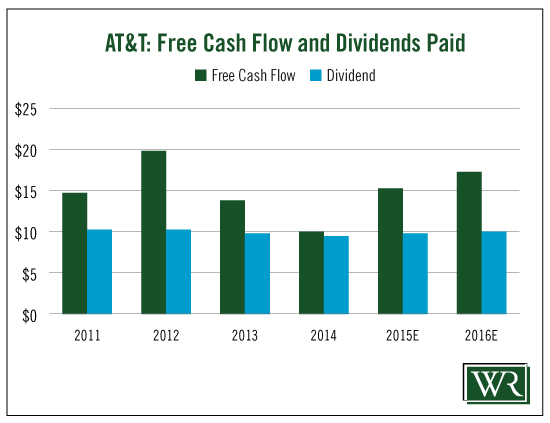 Another reason I’m not particularly worried is that the company has raised its dividend every year for 31 years.

I’m confident that the company will do whatever is in its power to keep that streak going.

AT&T is a Dividend Aristocrat – a company that has raised its dividend every year for 25 years or more. It’s a prestigious achievement, especially in a low-yield environment like today’s.

Companies typically want to hang on to that designation.

Once 2015’s numbers are in and show cash flow growth again, I expect AT&T to be upgraded. For now, its low rating doesn’t reflect my strong confidence in the stock.

Hoping your longs go up and your shorts go down,