Commercial traders are getting bullish on gold again…

[ad#Google Adsense 336×280-IA]They use futures contracts to hedge their exposure to gold and protect themselves from adverse downside moves.

And right now, these traders are gearing up for a gold rally…

Each week, the Commitment of Traders (COT) report shows the positions (long or short) of the largest commercial gold traders.

The short position in gold is almost always a positive number – meaning that commercial traders are usually short the metal.

That makes sense since most commercial short positions are hedges against future declines in price.

For example, if a major gold producer wants to lock in a guaranteed price on its gold production, it will short gold in the futures market – thereby hedging its bet.

However, when gold is trading low and commercial traders expect the price to increase, the COT short interest often drops to less than 50,000 contracts.

Last Friday’s COT report (which went through November 17) showed that commercial gold traders were short just 24,000 contracts. This is an extremely low level. And based on history, it’s a short-term bullish development. 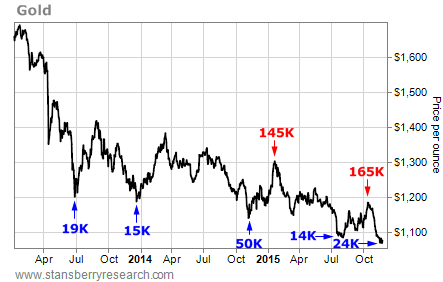 As you can see, the previous extremely low levels of short interest over the past three years marked at least short-term bottoms in the price of gold.

The last time the smart money short interest was this low was in late July. Commercial trader short interest in gold dropped to just 14,000 contracts. We told you to be on the lookout for a gold rally back then. And gold popped 9% higher over the next three months.

That rally peaked last month when gold bounced to $1,180 per ounce and short interest climbed to 165,000 contracts. Gold has sold off since then.

Now, with commercial traders’ short interest all the way back down to just 24,000 contracts, gold is set to rally once again. Traders should take advantage of the recent decline and buy gold here. The smart money says it should be higher by the end of the year.