Over the last several months, I’ve shown you several different options strategies that you can use to make serious money in the markets – simple call and put buys, bullish and bearish “Loophole Trades,” Straddles, and more.

But the constant in each of the strategies is that they have all been relatively short-term trade set ups designed to work within 20-30 days, with options that expire in about 45 days.

The mindset has been get in, get out and turn your profits pretty quickly – typically, the more efficiently you can use your capital, the better.

[ad#Google Adsense 336×280-IA]But I recognize that a lot of you come from a longer-term, buy-and-hold background. And I understand that this shorter-term, options-based way of generating income can be a bit much to take in as quickly as one would like.

So today, I’m going to show you a long-term options strategy you can use to boost your portfolio…

LEAPS is an acronym for Long-term Equity AnticiPation Securities (the P is often capitalized when it is written out to represent the P LEAPS to get the acronym to work).

These are options that allow for a longer time frame until expiration; you can buy many LEAPS as far out as two years and eight months before expiration.

They were created around 1990 and started out as only being available on stocks, but eventually became available on indexes and nowadays you can even find these on Exchange-Traded Funds (ETFs).

These are most often written, (but not exclusively) for January of whichever year up to two years out. Right now, in October 2015, you can buy LEAPS on underlying securities for October and November, whichever month comes next in that issue’s option expiration cycle, as well as and January 2016, 2017 and maybe even 2018. The January 2017 and 2018 would be considered LEAPS.

LEAPS options are in truth no different than their shorter-term siblings in that they have an expiration date, they can be found for both calls and puts, and they can be exercised at a given strike price.

But they come with some pretty terrific benefits…

The Benefits of Trading LEAPS
The primary benefit of LEAPS from an investment standpoint is they allow options traders the opportunity to take part in an underlying’s ability to make prolonged price moves without having to trade in and out of shorter-term option positions (racking up lots of brokerage fees in the process). One doesn’t have to stay quite as busy trading options like this.

LEAPS also allow for the opportunity to take advantage of the fact options are a way to leverage one’s cost in the trade. Since cost is risk, subsequently one’s risk is minimized over a straight stock purchase.

Take a look at the chart below on Nike Inc. (NYSE:NKE) 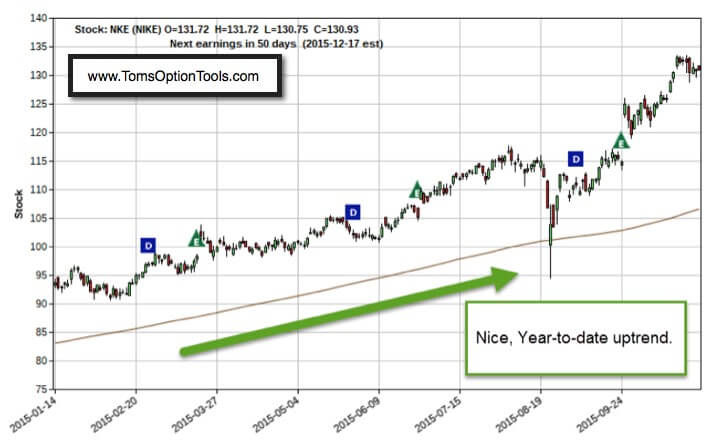 When buying LEAPS, I typically like to consider doing so on an underlying that shows a habit of sustaining substantial price moves over sustained periods of time. NKE fits that bill, showing a nice year-to-date uptrend.

Trading LEAPS vs. Trading the Underlying
To purchase 1,000 shares of NKE back in January 2015, (using the chart above, let’s consider the stock purchase price of $95), that would cost the investor $95,000 not including fees and commission. At the same time, buying the January 2016 $95 Calls, (10 contracts giving the owner the right to control 1,000 shares) would cost the options LEAPS trader $8,350 (the ask price on the $95 calls).

That is a SIGNIFICANTLY lower cost – and risk – than the outright purchase of the stock.

How’s that for leverage?

Another benefit is the Theta or Time Decay is MUCH less dramatic for a large part of its existence. A LEAPS option by its very nature isn’t going to have an expiration date right around the corner that the stock has to make a quick move in order to counter that time decay.

Let’s go back and take a look at NKE in January 2015. If you wanted to buy short-term options the Theta would be quite large.

As you can see, the Theta on the February expiration is almost three times greater than the Theta for the LEAPS.

Not only does one have more time for the stock to make a move, time decay isn’t as much a detriment to the position as the shorter-term expiration. 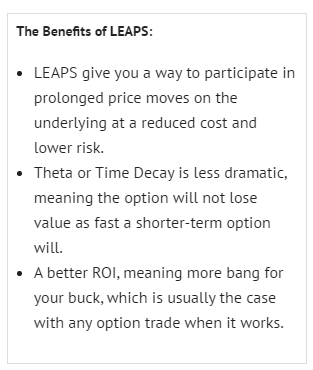 A Better Return on Investment

Options offer less cost and less risk, but when they work the Return on Investment (ROI) is better. You may make more money on the trade of the underlying, but from a pure return percentage on your money the option trade is usually better. Case in point look at the values of NKE stock today versus its LEAPS counterpart.

But take a look at the image below showing the options scenario and you will see a much better ROI number is/was available.

A whopping 329% ROI! Again, the money available to be made on the option trade is less than that on the stock scenario. But on a dollar for dollar basis, a return on your money basis, the options clearly outperformed the stock by leaps and bounds, if you’ll pardon my pun!

Pay Attention to Your Trade

Just like any option, they have an expiration date – so you’ll still have to keep an eye on your trade and manage it actively. You just won’t be up against the clock like you would be in a shorter-term option trade. 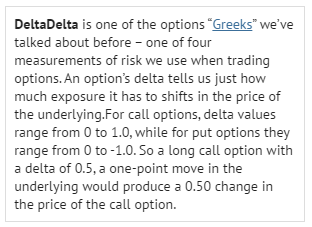 Another thing that some may consider a drawback is the Delta isn’t going to be as large as a shorter term in-the-money option. The further out options expiration will have less of a delta move because there is so much more time left on them. Shorter-term options have a bigger dollar-for-dollar move capability than the LEAP.

One last thing to note: you definitely do not want to use short-term tools such as Money Calendar or Darknet to find good underlying stocks for LEAPS trades. Those tools are designed to find trade ideas on underlying securities poised to make a calculated move within 20-30 days.

LEAPS are a great way to participate in options trading, giving yourself a means to participate in prolonged price moves in a variety of securities at a reduced cost, thereby limiting risk. They allow the leverage of options while also giving you a big of the buy-and-hold mindset you may be used to. 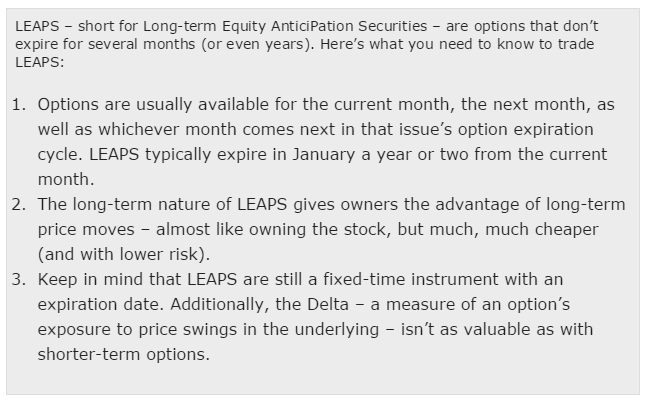