I don’t normally “do politics,” but today I’m going to make an exception because recent history suggests one presidential candidate could rise to the top and, in the process…

I hope so. What I have to tell you is a story based as much on rhetoric as reality.

It’s built on an opportunity that cuts deeply and, to be perfectly blunt, may be offensive depending on your personal views.

Yet, the story that follows and the two investment recommendations I’ve got for you today could be the most profitable investments you make all year.

Both have deep competitive moats and even deeper margins than other stocks and could benefit from a boost that you’re not going to find in any other industry coming into the Presidential election.

The last time a politician took aim at this industry, it doubled during the worst financial crisis in recent memory.

At one time or another, he’s on record as wanting to limit purchases, ban concealed carry permits, increase gun maker liability, and re-introduce the expired Federal Assault Weapons Ban, among other things.

You’d think the industry would crumble under that sort of onslaught, considering it’s coming directly from the top. In fact, exactly the opposite has happened. Guns, firearms and ammunition have flown off the shelves since his election in 2008. 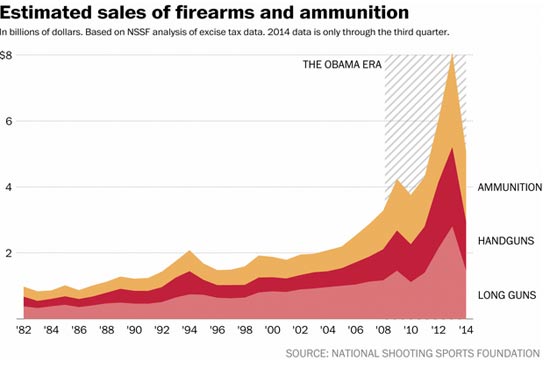 So much so that the firearm sector became one of the few standouts during the dark economic days of 2008-2009. “Our industry is proud to be one of the bright spots in this economy,” declared the National Shooting Sports Foundation in promotional literature at the time.

Most people are unaware that the gun industry’s economic output doubled from 2008-2011, rising from $6.8 billion to $13.6 billion, at a time when the limping U.S. economy grew just 11% by comparison.

By the end of President Obama’s first term, Smith & Wesson Holding Corp. (NasdaqGS:SWHC) had surged more than 272%, outpacing the gains of the S&P 500 by more than 3-to-1 despite a historic bull market fostered by the Fed’s cheap money policies.

Fast forward three years and the growth isn’t slowing down for a New York minute. Neither, unfortunately, are the tragic shootings fueling one of the greatest social divides in U.S. history. According to the Gun Violence Archive, there have been an appalling 274 mass shootings in which four or more people died in the United States so far this year alone.

Gun sales are soaring, the government still doesn’t track individual sales, and the FBI background check is a farce for all but the most hardened criminals (who obviously don’t care anyway).

Smith & Wesson stock is up another 100% despite more than tripling during Obama’s first term and may rack up $600 million in sales this year, a 50% increase from 2010 levels. Sturm Ruger is doing even better and is tracking $500 million, or nearly double what it did in 2010 according to FactSet.

As impressive as those figures are from a financial perspective, they’re a fraction of what could happen next.

During an October campaign rally in Florida, Hillary Clinton vowed to use executive action if Congress wouldn’t pass enhanced background checks. It’s a promise she’s repeated at several rallies, and even at the Democratic debate held earlier this month.

The gun lobby likes to joke that President Obama is its best salesman, but I believe Hillary is going to steal the title if she wins. To be blunt, I believe a Clinton victory will create a gun-buying frenzy that positively dwarfs anything that the Obama administration has brought on to date.

Gun control is one of the very few issues Hillary can use to maneuver to the left of her primary rival, self-declared socialist Bernie Sanders. That’s because he’s from rural Vermont where gun ownership is popular and he’s cultivated a voting record that reflects this.

I can’t imagine a bigger stimulus for gun sales than this.

It also makes me wonder if gun executives, who are notoriously conservative generally speaking, may actually cast their lot for Hillary in secret once the voting booth curtain is drawn.

Many analysts believe that Smith & Wesson Holding Corp. (NasdaqGS:SWHC) is poised for a pause after a blistering 759% run over the last seven years. Given the scenario I’ve just laid out for you, I believe there’s still plenty of upside.

The company makes and sells firearm products in the U.S. and internationally through two key segments: firearms and accessories. The company offers handguns, rifles, and all manner of law enforcement equipment.

This international customer base, though, is a key reason I prefer Smith & Wesson to its more U.S.-centric competitors like Sturm Ruger at the moment. While it’s true that the U.S. has 45% of the world’s armed civilians, other countries are seeing renewed interest in firearms.

Austria, for example, just reported record gun sales in Vienna, as citizens arm themselves in the face of a destabilizing mass migration that’s causing new fear and safety concerns. More than 70,000 guns have been sold this year despite a rigid permitting process. Shotguns, according to press reports, are sold out. Lines outside government offices for the required paperwork are now common. Women, ironically, are the key driver in a new personal arms race.

Smith & Wesson is perennially underestimated. Socially it’s the financial equivalent of a stray dog that you begrudgingly welcome to the family picnic. That sets up a contrarian opportunity based on nothing more than sentiment.

The company has just reported its 17th consecutive earnings beat and it’s trading at a PE of 19.54 according to YahooFinance. That’s not exactly inexpensive but it’s not outrageously out of line either. The price-to-earnings growth (PEG) ratio of just 1.08 confirms that it may be solidly valued when you consider its long-term growth prospects.

If firearms aren’t your thing for whatever reason, you’re not out of luck.

Consider Vista Outdoor Inc. (NYSE:VSTO), which was created as the result of a spinoff earlier this year. It’s already piling on the profits and has returned double-digits to date.

The company makes all kinds of outdoor products and is organized into two self-explanatory divisions: shooting sports and outdoor products. It’s best known for brands like CamelBak, Bushnell, Bolle, and Federal Premium just to name a few. But it’s also a top ammo and scope seller.

While it’s slightly more expensive than Smith & Wesson and has shown more modest quarterly growth of 5.7%, VSTO takes you beyond firearms by offering exposure to high value, high margin consumer outdoor gear. And with taxes on ammunition being one of the most potent rumors powering gun sales in America, VSTO (which didn’t exist in 2008) could be a major beneficiary of Clinton’s rhetoric, if not her policies.

In closing, I want to thank you for reading along all the way to the end today. Guns are a very contentious issue at the moment, yet when you take the emotion out of the investing process they merit examination just like any other alternative.

As we have discussed several times, sin stocks – including firearms – are usually more about value than vice when you get right down to it. And that means they can introduce an element of stability in your portfolio.

And that’s an opportunity every investor should understand.