Not investing in technology right now means missing one of the greatest bull markets of all time.

Over the last 10 years, the tech-centric Nasdaq Composite Index has beaten the broader market by more than double.

The American economy now runs on high tech – from chips to cloud computing to biotech to Bluetooth and Wi-Fi, these advanced systems form the backbone of our nation’s growth.

And with the Nasdaq off 6% over the last three months, now is the perfect time to get invested and position yourself for maximum tech-sector gains.

I’m about to show you the best stocks to do that with.

Each of these stocks is set to crush the broader market over the next decade, and they’re bargains right now. Together, they’re like a license to print money… 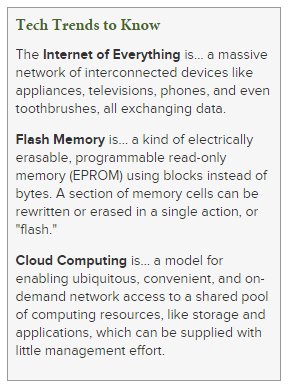 Wall Street has yet to price a big move for Qualcomm Inc. (Nasdaq: QCOM) – the world’s largest mobile chip firm – and its $2.4 billion buyout bid of CSR, which is itself a pioneer in Bluetooth and wireless connectivity systems.

CSR ranks as a leader in automotive “infotainment systems,” telematics, and technology for the Internet of Everything (IoE). This last market is a potential goldmine for Qualcomm.

The International Data Corporation expects the IoE market, with its billions of interconnected devices, to grow from a value of $1.9 trillion in 2013 to $7.1 trillion by 2020.

Perhaps the best thing about a stock like Qualcomm is that it’s a high-margin play on the company’s massive patent portfolio.

Its patents form the foundation for most of the world’s mobile communications.

Apple Inc. (Nasdaq: AAPL) is off its recent highs because Wall Street is worried about Apple’s iPhone sales in China. This despite the fact that the iconic smartphone had a 75% sales increase there in the June quarter.

But Wall Street is forgetting just how much the company has going on these days. The new Apple Watch is selling at about 10 million units a year, and the firm just released the iPhone 6s update to rave reviews.

And on Monday, The Wall Street Journal reported that Apple intends to release an electric car by 2019 and has already devoted a 600-person team to doing so.

With a $657 billion market cap, the stock trades at $115. It has a 41% return on equity and grew its most recent quarterly earnings by 38% – or more than 15 times the U.S. economy’s average growth over the last five years.

But it’s the company’s long-term vision that’s so exciting. You see, SanDisk intends to become a major player in data centers for cloud computing.

Companies are moving to flash storage because data can be retrieved about 20 times faster than from conventional hard disk drives. IDC says companies will spend more than $40 billion in 2015 on storage hardware alone.

With a roughly $11 billion market cap, SanDisk trades at $53. It has 17% operating margins and last year generated more than $1 billion in free cash flow.

Investors have worried lately that AbbVie Inc. (NYSE: ABBV) is too dependent on Humira (adalimubab), the best-selling drug in the world with sales last year of more than $12.5 billion. Patents on the anti-inflammatory begin to expire late next year.

However, AbbVie just made a $21 billion acquisition of Pharmcyclics Inc. The buyout added Imbruvica (ibrutinib), a promising leukemia drug, to its portfolio.

And in just the past two weeks, AbbVie announced that it is seeking to expand Imbruvica in the United States to include front-line treatment of chronic lymphocytic leukemia – the most common form of the disease.

The company is making some shrewd strategic partnerships right now, too…

It has partnered with Google Inc.’s (Nasdaq: GOOG, GOOGL) secretive California Life Company, better known as Calico. The two companies have agreed to invest $1.5 billion in drug research and will focus on genetic data to treat age-related diseases.

Since that time, the pioneer in the field has gotten hammered – it now trades at just $12.21.

To fuel new growth, the company has gone on an acquisition binge that has hurt short-term profits. This comes at a time when the sector is under pressure from an announcement that printing giant Hewlett-Packard Co. (NYSE: HPQ) intends to enter the space, which analysts say is growing at 30% a year.

That would be bad news for any other company… But 3D Systems has a huge head start on the lucrative federal market that most investors don’t even know exists.

3D Systems’ 3D design-to-print goods and services are being offered through the General Services Administration. That means the firm now is inside a program that distributes $50 billion worth of business a year.

With a $1.4 billion market cap, the stock has thin margins reflecting its current growing pains. It trades at just 1 times sales. And if DDD returned to just 50% of its December 2013 high, that would mean profits of 295%.