You’ve likely heard about this scandal by now…

Earlier this week, the world’s largest automaker admitted that it had been lying about how environmentally friendly some of its cars are.

In short, certain “clean diesel” Volkswagen cars had been equipped with software (known as a “defeat device”) designed to conceal the cars’ true pollution emissions during tests.

Now, the company could be fined billions of dollars and some of its employees could see jail time.

Platinum is one of the densest and heaviest precious metals.

It’s stable at high temperatures… It is resistant to corrosion… And it’s the primary metal used in catalytic converters in diesel engines.

When they work correctly, they convert harmful chemicals in vehicle exhausts into harmless gases like steam and carbon dioxide.

That’s what the converters in Volkswagen’s diesel-powered cars were supposed to be doing.

Now that the truth has come out about Volkswagen’s converters, many folks are worried that demand for diesel vehicles is going to drop.

These fears have caused the platinum price to drop. From last Friday (when the U.S. Environmental Protection Agency announced its allegations of Volkswagen cheating on emissions tests) to Wednesday, the price of platinum fell around 5%. It’s now trading at a six-year low. The last time platinum traded at these levels was during the 2008-2009 financial crisis. 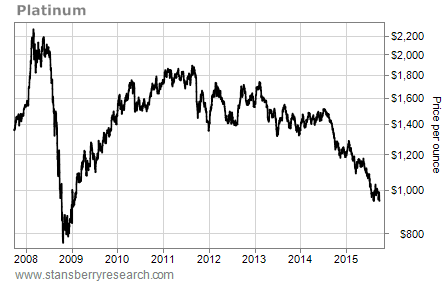 But the selloff is creating an opportunity…

You see, the U.S. isn’t the big driver of the global diesel market. And the picture is different in other parts of the world. For example, emerging markets continue to increase their diesel demand.

PIRA expects global diesel demand to increase 5 million barrels per day by 2030. More than 70% of diesel is used for transportation globally, and this percentage should increase to more than 80% over the next 15 years.

In short, the market is overreacting. The world is still using diesel, which means it still needs catalytic converters.

We may see more downward pressure on platinum prices in the near future. But as investors realize diesel isn’t going away globally, prices will head higher.

Investors looking to profit should buy once we see the start of an uptrend.