Entirely too many investors lurch from one stock to another in a desperate search for higher returns. While a precious few get lucky, the majority doom themselves to abysmal returns.

Wall Street, of course, loves this, because this kind of behavior generates huge commissions and gives professional traders a self-replenishing source of fuel… your money.

Thankfully, it doesn’t have to be that way.

[ad#Google Adsense 336×280-IA]Today we’re going to talk about what you need to know about a special class of investments that’s been shown to account for as much as 90% of total market returns over the last century.

They’re beaten down, ideal for anyone who’s been burned by the latest dot-bomber or media darling, and one of the most sensible investments you can make today.

Best of all, they pay you cold hard cash while requiring almost none of your time to manage, making them a perfect choice even if there’s more volatility ahead.

Here’s a time-tested way to put your investment money to work during turbulent times.

What Most Investors Are Missing in Their Rush to Profits

I’ve talked with tens of thousands of investors over the years and inevitably they all want the same thing… safe, big double-digit returns.

There’s nothing wrong with that.

It’s absolutely possible. No – scratch that – it’s essential to building the financial future of your dreams.

Here’s the rub though…

Most investors go about this entirely the wrong way. They pursue the next “best thing” and lurch from stock to stock thinking that’s going to get them the home run they desperately crave. The majority of the time they wind up with nothing to show for their efforts save smaller brokerage statements.

In reality, the path to above average double-digit returns is right in front of them. It’s the sure things that make this happen.

As usual, this is counterintuitive. As always, you’ve got to get your emotions out of the way before you get started. That way you can take a good hard look at the data without damning emotional hang-ups.

That’s what Richard Turnhill and Stuart Reeve did in 2010. The former is chief investment strategist for BlackRock’s Alpha Strategies Group and the latter is the lead portfolio manager for BlackRock’s Global Dividend Income portfolios. Between the two of them, they help manage more than $4.7 trillion – with a ‘T!’

Their research, like mine, tells a very compelling story – up to 90% of total returns over the last century came from dividends and reinvestment. Not 25% or 50%, but 90%.

Most investors hear this and immediately make a fatal assumption that they have to play a decades-long waiting game to earn that kind of money. That’s simply not true.

In fact, companies that distribute regular, reliable dividend payouts tend to significantly outperform their non-dividend peers over both the short and long term. 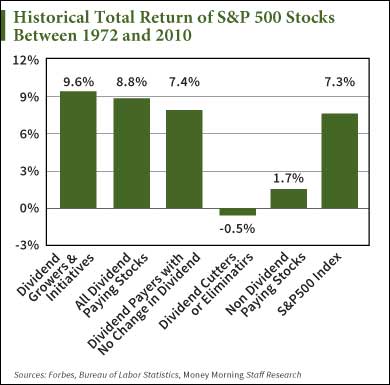 There are a couple of reasons why. First, dividend-paying stocks offer a constant income stream that offsets low interest rates.

Second, they tend to be better-run and have better business models and stronger balance sheets than non-dividend-paying alternatives.

And, third, dividend-paying companies place a premium on stability so you have the built-in downside protection of savvy managers rather than clueless politicians and even more clueless Fed officials.

While the first two are obviously very important under any market conditions, the latter is critically important now.

That’s because dividend-paying stocks have, on average, suffered losses less than half as severe as those that don’t reward their shareholders over time.

Obviously, earnings are under pressure right now. Chances are you’re hearing a lot about this in the mainstream media. I’ve certainly been asked about it in connection with my recent television appearances.

Conventional thinking is that this is going to crater dividends, so a lot of people are prepared to write ’em off.

You see, dividends, as we have discussed many times, are a function of much more than earnings. Companies that pay them tend to have a moderate growth rate that’s matched by a strong balance sheet, solid cash flow, and strong earnings. You simply cannot look at earnings in isolation. 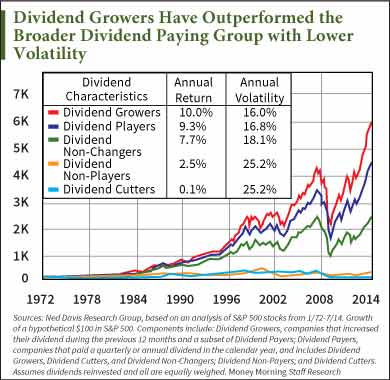 The other thing to keep in mind is that many of the best run companies actually grow their dividends over time.

They’re not like making a fixed income investment in a bond that never changes, which is how a lot of people think about dividends.

That means that every dollar you invest and reinvest going forward is compounded.

This is important because here, too, there is a performance difference – dividend growers outperform companies that keep their dividends the same.

You can see that very clearly in a lot of studies, but one of my favorites is this one from Ned Davis Research highlighting how powerful this can be even under some of the toughest market conditions in history.

What’s interesting about this is that the outperformance is true for both U.S. stocks AND global stocks. 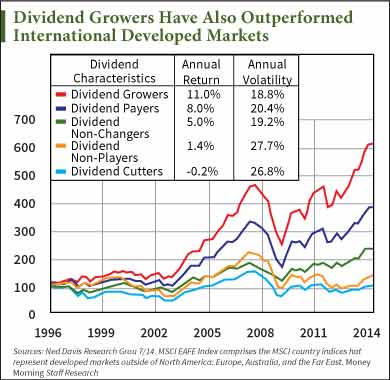 What’s really great though – and admittedly is my favorite part of all this – is that dividend growth is so powerful that you can make a modest investment and over time earn more money than you paid to do so.

I’ve known plenty of savvy investors, for example, who made modest investments in companies like Altria Group Inc. (NYSE: MO), Procter & Gamble Co. (NYSE: PG), and others who have received more in dividends over the years than it cost them to buy the shares initially.

Effectively, they’ve got gobs of free money on their hands, and you can bet they’re living the high life, too.

So how do you get started?

I’m glad you asked… by taking a look at a few key numbers.

In February 2010, I raised some eyebrows by recommending Altria Group to Money Map Report subscribers. It was a controversial recommendation at the time because, in addition to waves of litigation, the stock was brushing up to 52-week highs that made some observers question my timing.

But I wasn’t worried about market timing – then or ever. I was much more interested, as I noted to my readers, in Altria’s proven ability to hike its dividend payouts significantly over the years. In fact, as I explained to readers, I was so confident in Altria’s ability to continue its string of dividend hikes that I titled the issue “This Ultra-Reliable 6.9% Dividend Is Just the Beginning.”

Sure enough, Altria has hiked its dividend seven times in the five years since, rising from $0.38 per share in the days immediately before my recommendation to $0.565 per share today – a 48.6% dividend increase as it gave readers who followed along the opportunity to capture profits of more than 175%. The S&P 500, by comparison, has turned in only 83.11% over the same time frame. 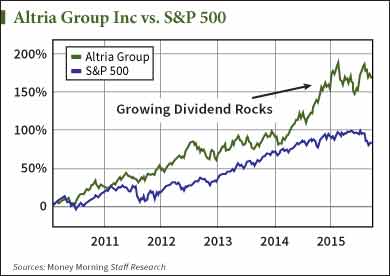 It seems obvious in retrospect, but at the time Altria’s ability to keep up its legendary dividend hikes was seen as being very much in doubt.

Multibillion dollar lawsuits targeting the company (often successfully) led many analysts to wonder how much cash Altria would have to maintain, much less increase, its payouts.

As usual, though, analysts were asking the wrong question.

I was more concerned with the company’s payout ratio – the percentage of a company’s earnings that go back to shareholders in dividends. The few analysts who gave it a fair hearing thought Altria’s then-payout ratio of 77% was suspiciously high.

They weren’t factoring in the reality that this payout ratio was actually on the historically low side for Altria, which maintained a profit margin that crushed the overall consumer goods sector by more than two-to-one.

Companies that have high profit margins are usually well-positioned to not only maintain but also increase their dividend payouts over time. For example, look at Hershey Co. (NYSE: HSY), which managed to raise its dividend payout seven times in the last seven years.

You might not suspect that a chocolate company would be able to hike its dividend payout by 95.9% at a time when financial markets seemed to teeter near the point of collapse, even if it had an unbeatable brand like Hershey.

But once again, the company’s dividend outlook was determined by profit margin. The company maintained a profit margin of 10.47% in September 2009, according to Ycharts.com. That was respectable enough to give management plenty of breathing room to raise dividends, especially since the product was already so cheap it didn’t see much of a drag in demand due to recession.

Finding Extra Income in the Most Unlikely Places

Then there’s the technology sector, which typically isn’t considered a significant source of dividend income.

Many tech stocks are notoriously stingy when it comes to dishing out dividends. That’s because the sector they’re fighting over is so fluid, they often can’t afford to divert precious resources from research and development lest they lose the crucial battle over market share. They’ve also convinced legions of investors that growth companies simply don’t pay out (which is baloney, but another story for another time).

But the fact remains, a great way to generate reliable income is to invest in mature dividend-paying technology stocks that sit on huge cash hoards and control proprietary technology that the world’s consumers increasingly covet.

A notable (and recent) case in point is Apple Inc. (Nasdaq: AAPL). The Cupertino giant hiked its dividend by 33% five months ago – mere weeks after I identified it as a likely dividend hiker to Total Wealth readers.

This technology icon is able to hike its dividend despite the nature of its sector because of its stellar profit margin of more than 22%. Tim Cook’s well-known intent to reward shareholders also contributed to making the company a likely dividend-grower in my view.

Another enticing dividend-paying tech stock is Qualcomm Inc. (Nasdaq: QCOM), which has raised its payouts by 37% in just the last two years.

With a stellar profit margin of more than 23%, the company is a very strong candidate to boost its dividend payout significantly in the near future.

Although it’s more of a dark horse candidate, Sandisk Corp. (Nasdaq: SNDK) could hike its dividend in a meaningful way as well. The memory storage device maker is tapped into the “Unstoppable Trend” of technology and has hit a rough patch of growing pains that isn’t unusual for expanding new players in new markets. But it’s also raised its dividend payout by 33% over the last two years, and its 46% payout ratio means it has more room to grow.