With the recent dips in the market, I have been accumulating shares of these stocks as I believe they will be some of the better growth investments going into the back half of 2015.

And, with Iranian oil supplies being allowed back into the global markets, there is arguably going to be a cap on oil prices in the near-term further strengthening the growth prospects of these stocks.

Now, I am not arguing the merits of the deal the United Nations struck with Iran, but as a disciplined investor it would be a mistake not to take advantage of the effects in the market from the terms of the deal.

With Iran’s 3.3 million barrels per day of production and 30 million of barrels of crude in storage ready for export, the supply glut in the oil market suddenly got a lot worse and the price of crude could possibly dive down even further.

The good news from this, however, is that fuel costs are the second largest operational expense behind personnel for this group of stocks.

Any savings on fuel will drop immediately to the bottom line boosting profits and giving these companies the financial flexibility for dividend increases and stock buybacks without having to tap the debt markets.

This deal is a win-win for these stocks that I am recommending today.

The stocks that I am detailing are airline stocks, and their stock prices have been under pressure recently for two primary reasons. First, investors are worried about too much capacity growth which could reduce prices and margins as well as ignite the bad old price wars that led to bankruptcies in the past. The second big worry is the recently announced investigations by federal regulators around “collusion” among the five or six airlines left after a wave of consolidation since the financial crisis. While these worries may sound daunting, they will not materially affect the airline industry or their profits as I will detail below.

Let’s tackle the concerns around capacity first. Airlines have expanded too fast in good times in decades past only to be caught with too many seats whenever the economy slowed down or went into recession. This led to a swath of bankruptcies including many airlines that went bankrupt multiple times. However, that was when there were a dozen or more large airlines. Today, after much consolidation over the past few years, there are less than half that number of domestic based airlines.

This has resulted in more of an oligopoly which should be much more disciplined around pricing as well as capacity growth. Comments from American Airlines (NYSE:AAL) last week added some reassurance that airlines would continue to prudently manage capacity growth.

The allegations about “collusion” would be laughable if not for some of the more backward actions from regulators over the past few years. The industry as a whole barely broke even over the last decade and has finally had a couple of profitable years after losing tens of billions during the financial crisis and its immediate aftermath. I think these investigations will prove fruitless and will soon blow over.

In addition, airlines have raised revenue through additional fees and increasing their load factors while there has been little in the way of fare increases. The industry is benefiting greatly by the plunge in oil and correspondingly jet fuel prices since last summer. This is the largest operational cost outside employees for airlines and bottom lines are being bolstered by lower energy prices. 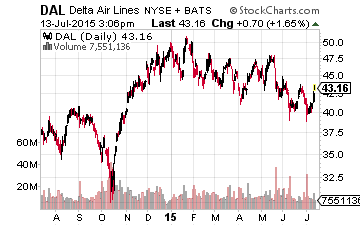 Crude prices should remain low over the foreseeable future outside a major geopolitical event. Iran looks on the verge of returning fully to the crude market and U.S. production is still growing despite falling rig counts. This will be a powerful tailwind for earnings in coming quarters and years.

My favorite airline stock here is Delta Airlines (NYSE: DAL). The company has done a good job with a large merger and has the least unionized workforce of the major carriers. It has not had the labor strife and integration problems of United Continental Holdings (NYSE: UAL) which has resulted in a huge amount of canceled flights last week due to system issues within its reservation platform. This has happened a few times over the past few years and this event would have garnered more headlines if not for occurring on the same day the NYSE froze for four hours.

Delta has a steep earnings trajectory ahead of it. After earning $3.30 a share in FY2014, it should earn over $4.25 a share this year and analysts believe it will do $5.10 to $5.50 a share in profit in FY2016. With the stock in the low $40s, the shares go for less than eight times 2016’s profit projections; approximately half the overall market multiple. 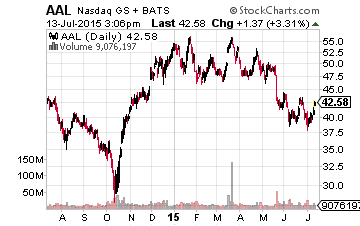 American Airline also looks good here. It is the least hedged of the major airlines and will benefit the most from continued low jet fuel prices.

The consensus sees that dropping to around $7.00 a share in FY2016, but it could easily beat that estimate if jet fuel prices stay at current levels. Like Delta, American is selling in the low $40s or around five times this year’s likely profits. 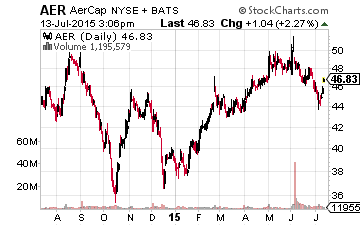 Another play on airline traffic is one of the aircraft lessors, AerCap Holdings (NYSE: AER). This is a stock I first wrote about almost two years ago when the shares traded hands at around $18.00 a share. The stock now trades in the mid $40s but is still cheap.

The company was transformed when it picked up the aircraft leasing business of insurer American International Group (NYSE: AIG) on favorable terms which more than tripled its size. The acquisition gave AerCap a highly desirable portfolio of newer planes and is a key reason that its fleet is currently 99% leased.

The percent of planes leased rather than owned has quadrupled over the past 25 years and this trend should continue especially in the emerging markets where most of the growth in airline traffic is coming from. This year roughly 100 million people in Asia will travel via air for the first time in their lives. Earnings should increase just over 10% this year and the stock is cheap at just over eight times this year’s expected profits.

This sector currently sports some of the lowest valuations in what I believe is an overbought market. The selections above are good bets to keep your portfolio flying higher through year-end.