Greek banks were hanging onto a cliff’s edge by their fingernails when Greek and European parliaments and finance ministers debated the future of Greece within Europe.

But less than a week after the referendum that said “όχι!” (No!) to more austerity, Prime Minister Tsipras had already betrayed that vote, proposing considerable cuts in exchange for yet another lifeline.

And yet, the euro hardly budged more than a couple of percentage points, and European stocks are actually positive on the year.

That is just where our can-kicking profit opportunity lies…

Tsipras Is Doing What Politicians Do Best

As Greeks prepared to vote in their recent referendum, Prime Minister Tsipras told fans at Syntagma Square in Athens, “I call on you to say a big ‘no’ to ultimatums, ‘no’ to blackmail. Turn your back on those who would terrorize you.” 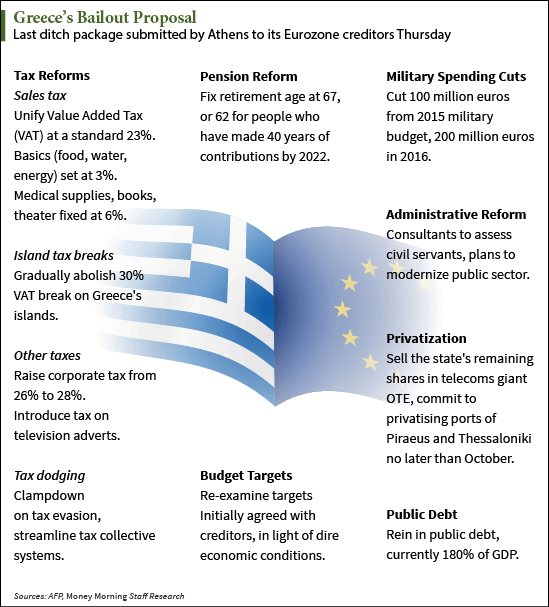 Finally, they were done with all that “austerity” being imposed by the rest of Europe.

And yet that referendum was futile.

You see, Greeks voted “No” on a bailout offer that European creditors had already withdrawn.

The people thought they were giving Tsipras a mandate to get a “better deal.”

But just four days later, Tsipras’ government went back to ask its creditors for nearly the exact same deal, reneging not only on the referendum outcome, but on most of the promises his party had made to win the January election.

At left you can see what that initial proposal looked like…

After negotiating for 17 hours, and well past the initial Sunday deadline, a deal was finally reached to avoid a “Grexit”… for now.

[ad#Google Adsense 336×280-IA]Tsipras caved on nearly all his referendum-mandated demands: less austerity and a reduction in debt.

The latest bailout, worth another €86 billion ($94 billion) over three years, will include still more austerity, and of course even more debt.

And still, just for this deal to proceed, the Greek Parliament needs to pass legislation covering everything from full pension reform to increasing the country’s value-added tax (VAT).

Even then, Eurozone finance ministers will have to rubberstamp these changes, and their own parliaments will need to provide their own approvals.

Many observing economists believe the deal is so onerous, it will ultimately prove impossible to implement.

In the process, Greece has abandoned the little independence it still had and bought itself more time.

You see, a principal feature of the latest deal is the Greek Privatization Fund (GPF).

Greece will have to place government-owned assets into a structure that needs to generate €50 billion of cash through sales. €25 billion of that will go to repay funds needed to recapitalize Greek banks, €12.5 billion to reduce the debt burden, and €12.5 billion towards internal investments.

The GPF will contain valuable Greek assets including utilities and shipping ports. But national treasures like the Acropolis and popular tourist islands are “hands-off.”

Initially, the Germans proposed GPF be located in Luxembourg (and partly run by Germany, of course), but that was abandoned as politically suicidal for Tsipras. Rather, the fund will be set up in Greece, managed by Greek authorities, and overseen by “the relevant European institutions.”

The Investment Set to Beat the Markets

Yes, it’s true that Greece is a broken economy, with the largest (and still growing) debt in the EU, and unemployment topping 25%. Its banks are shuttered and ATMs running dry until the latest bailout gets the rubber stamp.

But meanwhile, the Barclays Euro Government Bond 10 Year Term Index is only down 2% on the year and has climbed in the past month.

And the Eurozone remains one of the largest and most significant economic areas.

I believe that’s the market’s assessment that the latest Greek bailout deal will allow European stocks to resume their recent trend and continue outpacing American stocks.

FEZ is a great proxy for some of the largest companies that are part of the 19 Euro Stoxx Supersector Indexes. Current holdings hail from the healthcare, energy, industrial, financial, automotive, insurance, and consumer staples sectors.

Because don’t forget, as bad as this deal may be for both sides in the long term, for now it keeps Greece inside the Eurozone. Meanwhile, the European Central Bank is still very much in QE mode.

And that means Europe is not finished playing catch up to the U.S.

With the new agreement all but locked up, European markets are returning to their cyclical bull market.

It’s time to go long European stocks through FEZ – use a hard closing stop of $34.86 (its January low) and a 15% trailing stop.