Your eyes aren’t deceiving you: It really has been that ugly of a year on Wall Street. Through the first half of 2022, the broad-based S&P 500 produced its worst return in 52 years!

But things have proved even more challenging for the technology-driven Nasdaq Composite and Nasdaq 100. The latter is comprised of the 100 largest nonfinancial stocks by market cap listed on the Nasdaq stock exchange. Both of these indexes have respectively lost around a third of their value since hitting all-time highs.

But when there’s fear on Wall Street, there’s also opportunity. The Nasdaq 100 is currently home to a number of plain-as-day bargains. What follows are three Nasdaq 100 stocks you can confidently buy hand over fist in October.

Amazon
The first Nasdaq 100 stock that’s begging to be bought in October by opportunistic investors is none other than FAANG stock Amazon (AMZN).

Since Amazon generates the bulk of its revenue from its leading online marketplace, a weakening U.S. economy and historically high inflation are viewed as tangible headwinds that could hurt this core segment. But what investors might be overlooking is where Amazon will generate the lion’s share of its future cash flow and profits. 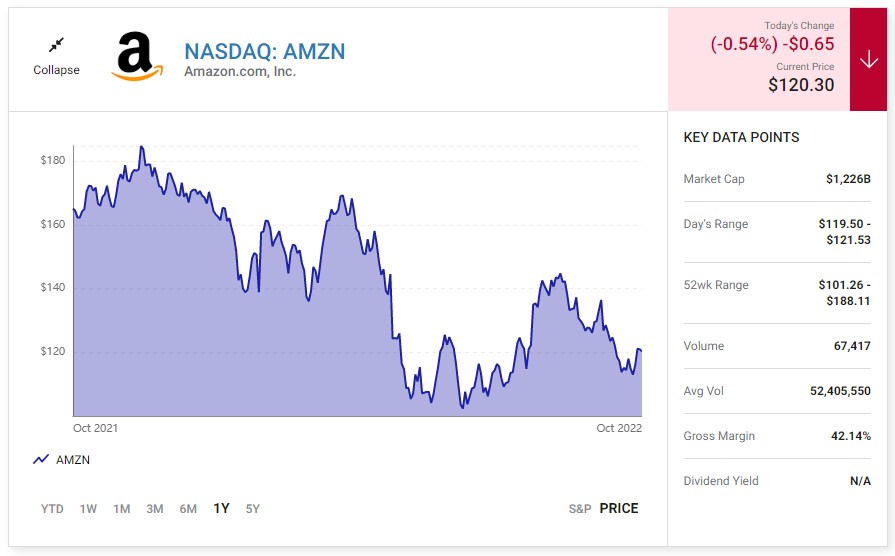 Yes, Amazon’s online marketplace is a behemoth. According to eMarketer, Amazon is on track to account for nearly 40% of all U.S. online retail sales in 2022. Even adding up its next 14 closest competitors would still put you more than 8 percentage points behind Amazon’s dominant online retail-sales market share.

However, selling goods online is a relatively low-margin business. The true value of Amazon’s marketplace is the attention it brings to the company’s higher-margin operating channels.

For instance, Amazon has pivoted its online retail success into signing up well over 200 million people worldwide to a Prime membership. This 200-million-plus figure is as of April 2021, and Amazon has presumably added tens of millions of additional Prime members, thanks to its exclusive deal to carry Thursday Night Football. In exchange for giving Prime members shipping perks and access to exclusive content, Amazon nabs an annual run-rate of $35 billion in high-margin subscription sales.

Amazon is also making waves with its world-leading cloud infrastructure service. Amazon Web Services (AWS) accounted for close to a third of cloud-service spending during the second quarter, which is noteworthy, given that cloud infrastructure growth is still in its early stages. Although AWS contributes about a sixth of Amazon’s net sales, it regularly generates well over half of the company’s operating income.

In other words, Amazon’s retail segment isn’t anywhere near as important as the growth from the company’s higher-margin operations. Even with the growing prospect of a U.S. recession, Amazon’s cash flow needle continues to point higher. That’s what makes it such a no-brainer buy right now. 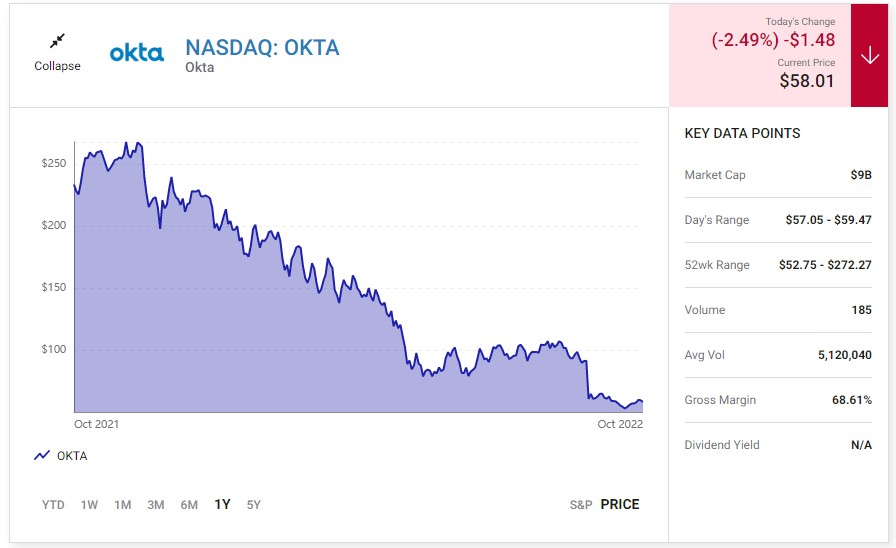 Okta
The second Nasdaq 100 stock that’s a surefire buy in October is identity-verification-focused cybersecurity specialist Okta (OKTA). Since hitting a record high in early 2021, shares of Okta have fallen by 81%. The culprit? Look no further than the company’s bottom line.

When bear markets arise, Wall Street becomes less tolerant of companies with premium valuations that are losing money. In Okta’s case, the challenging integration of Auth0 following its acquisition, as well as persistently high stock-based compensation, have weighed on the company’s bottom line and pushed recurring profitability out at least a year longer than Wall Street had anticipated.

Clearly, losses aren’t something to cheer. However, Okta looks to be well-positioned in a number of ways to succeed over the long run.

On a macro basis, cybersecurity has evolved into a basic-necessity service. No matter how poorly the U.S. economy or stock market perform, robots and hackers don’t take time off from trying to steal critical data. This provides a safe demand floor for virtually all cybersecurity stocks, including Okta.

On a more company-specific basis, Okta’s advantage is its artificial-intelligence (AI)-driven, cloud-native platform. Because the platform was built in the cloud and relies on machine learning to grow smarter at recognizing potential threats over time, Okta’s solutions should prove more effective at denying hacking attempts than on-premises security services.

What’s arguably most intriguing about Okta, though, is its aforementioned buyout of Auth0. While there have been integration issues, the plain-as-day advantage of acquiring Auth0 is that it gives Okta access to international markets. Even with economic uncertainty, Okta should be able to maintain sales growth of 20% (or more) on an annual basis, thanks, in part, to this buyout.

Whereas there are clear headwinds impacting Amazon and Okta, there’s nothing damaging in Microsoft’s operating results to signal trouble. The 32% that Microsoft’s shares have fallen since hitting a record high late last year looks like quite the discount for a high-margin company that continually delivers.

As I’ve previously noted, the biggest key to Microsoft’s success is that all of its puzzle pieces are working together. For instance, the company’s legacy Windows operating system (OS) isn’t anywhere close to the growth story it once was. Nevertheless, Windows remains the dominant global desktop OS and is therefore able to generate significant operating cash flow for the company. Microsoft is able to deploy the cash generated from its legacy operations into high-growth initiatives and acquisitions. 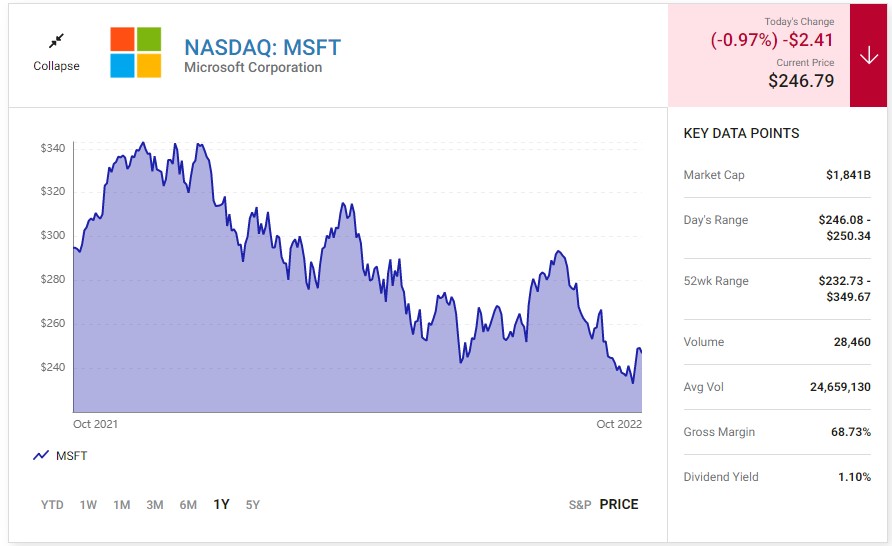 When it comes to high-growth initiatives, nothing is more important than investing in cloud services. Microsoft Azure, which is the No. 2 cloud-service provider behind AWS, has been consistently growing year-over-year constant-currency sales by close to 50%. Cloud-driven growth from Azure, Dynamics 365, and Microsoft’s commercial Office segment, should help sustain double-digit sales growth, which is no small feat for a company slated to produce $221 billion in revenue for fiscal 2023.

Additionally, acquisitions are expected to play a key role for Microsoft. The company has nearly $105 billion in cash, cash equivalents, and short-term investments on its balance sheet and brought in $89 billion in operating cash flow over the trailing year. As a result, it has the freedom to take chances.

The proposed $68.7 billion all-cash buyout of gaming company Activision Blizzard is a perfect example of this. If this deal closes, Microsoft will further solidify its place in the gaming arena, as well as set itself up as a potential metaverse gateway.

Microsoft has a superb balance sheet and sustained double-digit sales growth. With a forward-year price-to-earnings ratio of less than 20, the company is a steal of a deal.