I always thought living off of dividends was a dream. I imagined waking up, walking down to the mailbox, and collecting my fresh dividend check. Well, I made this dream come true.

However, it’s not quite as I imagined. Things are a bit different in 2022. And by different, I mean better.

No need to walk down to the mailbox to collect a check. Instead, dividends are digitally deposited right into my account. But wait. There’s more.

You see, if you’re only living off of dividends, inflation will slowly eat your purchasing power alive.

But if your dividend income is growing at least as fast as inflation, if not faster, you’re constantly staying ahead.

Today, I want to tell you about 6 dividend growth stocks that just increased their dividends.

The first dividend increase I have to tell you about is the one that was announced by American Tower Corp. (AMT).

Because what’s better than one dividend increase per year? Four dividend increases per year. When you look at the current quarterly dividend against what it was one year ago, we’re looking at a 12.2% YOY increase in the payout. Nice!

The thing with this REIT, compared to most other REITs, is that it tilts more toward growth than yield. Indeed, the 10-year DGR is 29.1%. That is a super high dividend growth rate for a REIT. Even the five-year DGR, at 18.3%, is still huge for this space. On the other hand, the stock yields 2.7%. 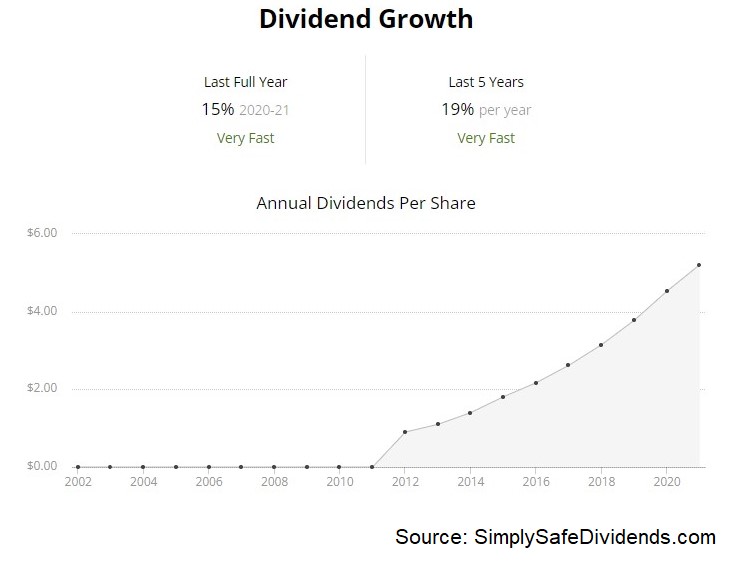 That’s very respectable, and it’s actually 80 basis points higher than its own five-year average. To be fair, though, this yield isn’t as high as what a lot of other REITs offer. Still, a near-3% yield with this kind of double-digit dividend growth is more than enough to make almost any shareholder happy. And with a payout ratio of 60.3%, based on midpoint guidance for this year’s adjusted funds from operations per share, this is a well-covered dividend poised for continued outsized growth.

After seeing its price drop 25% YTD, this stock looks reasonably valued. The P/CF ratio of 22.6 isn’t the lowest out there. There are plenty of REITs with P/CF ratios of well under 20. But those REITs haven’t grown anywhere near as fast as American Tower has been.

Keep in mind, the stock’s own five-year average P/CF ratio is 24.9. So there’s a decent discount here relative to its own recent historical average. You can also see that discount pop up in the yield spread that I noted earlier. American Tower towers above the rest of the REITs. Indeed, its $100 billion market cap makes it the biggest REIT in the world. If you don’t yet own a slice of this fantastic business, consider changing that.

Next up, let’s have a quick discussion about the dividend increase that came in from Fifth Third Bancorp (FITB).

Fifth Third just increased its dividend by 10%. Want to beat inflation? All you have to do is see your income grow even faster than the rate at which your expenses are inflating. And with broader inflation running at about 8% annually in the States, Fifth Third is doing a great job at helping their shareholders do just that.

This is the 12th consecutive year in which the regional bank has increased its dividend.

Boy, Fifth Third flies under the radar. But they’re putting together a heck of a dividend resume. The 10-year DGR is 14.1%. Along with the double-digit dividend growth rate, the stock yields a market-smashing 4.1%. This yield is extremely high for a bank. I know of plenty of utility stocks with lower yields than this. It’s nuts. Meantime, the payout ratio, which is 40%, shows us a healthy dividend that’s positioned for more growth. 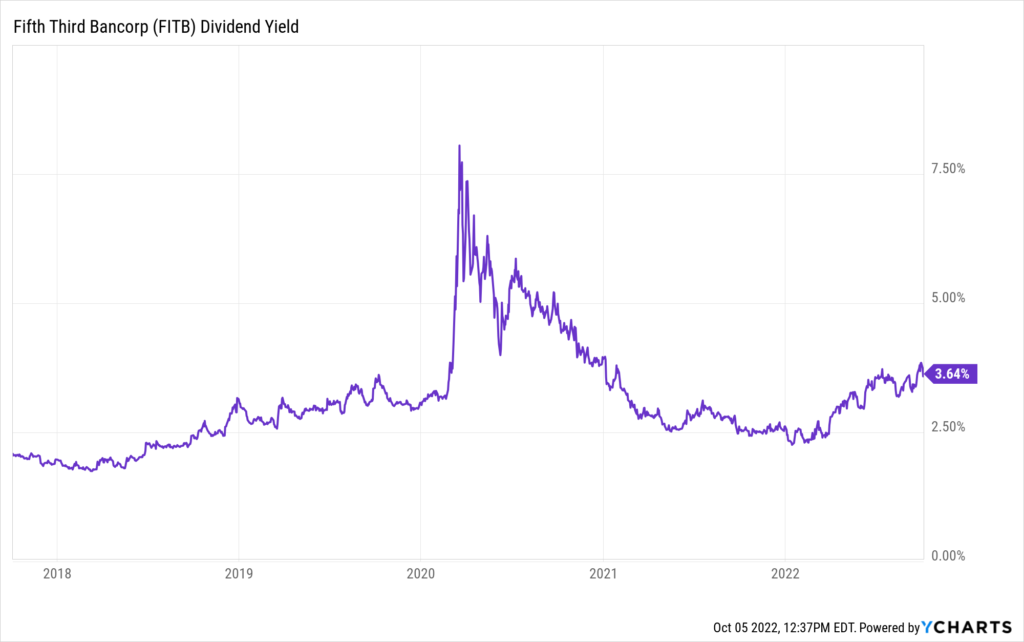 In my opinion, this bank stock is super cheap. We’re talking about a sub-10 P/E ratio. The P/E ratio is in the single digits. We can also look at the P/B ratio, since this is a bank. Most banks in the US typically average P/B ratios between 1 and 2, depending on the bank and where we’re at in the cycle.

Fifth Third’s P/B ratio is 1.3, so it’s definitely on the lower end of that range. We put out a full analysis and valuation video on this high-quality regional bank back in the spring, estimating intrinsic value for the company at slightly over $47/share. Cheap stocks can get cheaper. No rule against it. But I like the setup here for long-term dividend growth investors. Take a look at Fifth Third after this sizable dividend increase.

The third dividend increase I want to share with you is the one that was announced by Lockheed Martin Corporation (LMT).

Lockheed Martin just increased its dividend by 7.1%. Want to defend your portfolio against rising costs? Lockheed Martin is a great way to do that. The company is pretty much a lock for high-single-digit dividend growth. And in a normal environment in which inflation isn’t out of control, which I suspect is an environment we’ll return to before too long, that’s more than enough to get the job done. 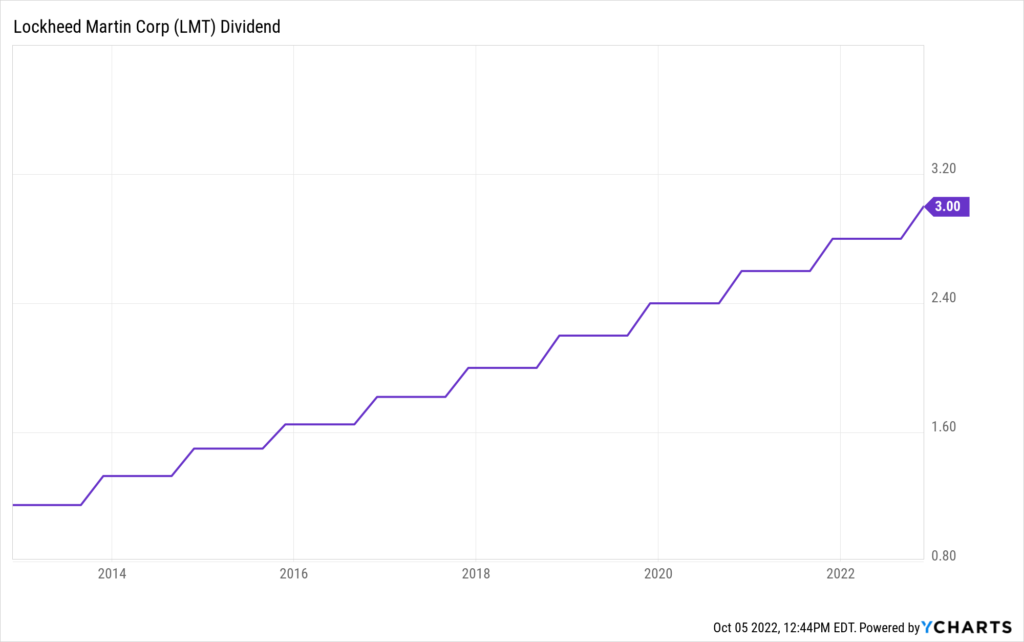 The stock’s yield of 2.9% blows away what the broader market gives you. And the 10-year DGR of 11.4% keeps your income rising, year in and year out, like clockwork. Regarding safety, the payout ratio of 55.6%, based on this fiscal year’s EPS guidance, shows a dividend that’s quite safe, if the fact that the dividend just got increased didn’t already prove that out.

The stock has held up pretty well this year, but I still see it as a great long-term investment.  The S&P 500 is down by more than 20% this year. There’s been plenty of carnage. In the face of that carnage, Lockheed Martin’s stock is actually up 9% in 2022. 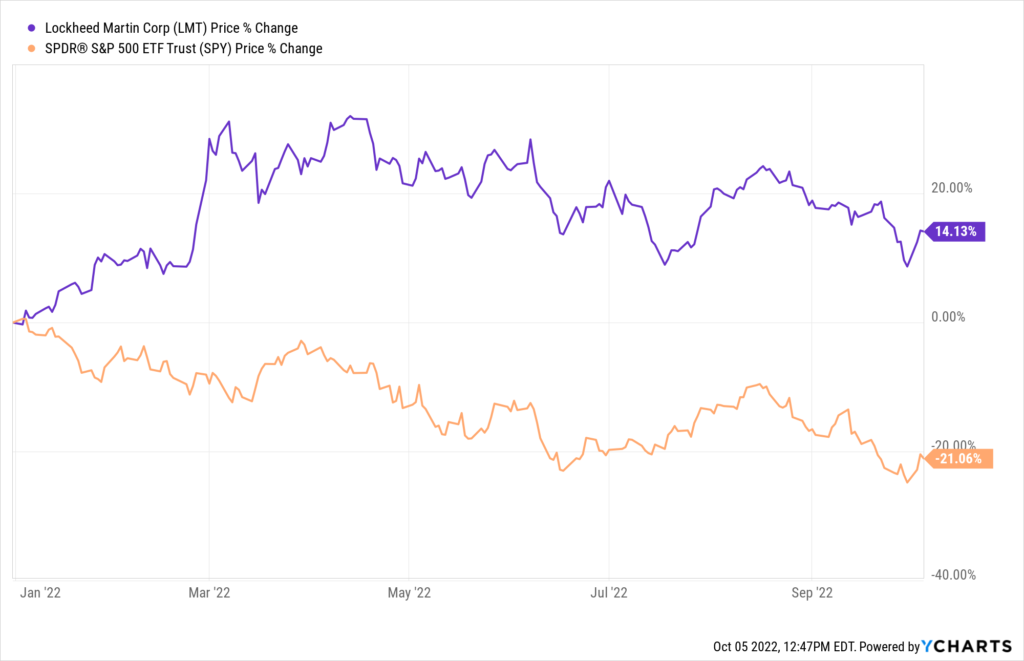 Pretty amazing. And I guess that looks pretty good when you consider that I picked Lockheed Martin as one of my top five stocks for 2022. However, the stock holding up so well isn’t a big win for those looking to buy in. We want to buy cheap, right? Well, fear not. Our recent video highlighting Lockheed Martin as an attractive long-term investment idea for dividend growth investors showed a business that looks to be worth almost $450/share. The stock is currently below $400. It’s held up well, yes. But it could continue to hold up well. Keep Lockheed Martin on your radar (pun intended).

Next, we have to quickly talk about the dividend increase that came courtesy of Microsoft Corporation (MSFT).

Microsoft just increased its dividend by 9.7%. Mr. Softy comes through yet again. Microsoft is about as good as it gets in the tech space for long-term dividend growth investors who are looking for consistent high-single-digit to low-double-digit dividend raises. You can almost set your watch by Microsoft’s sizable dividend increase each September. 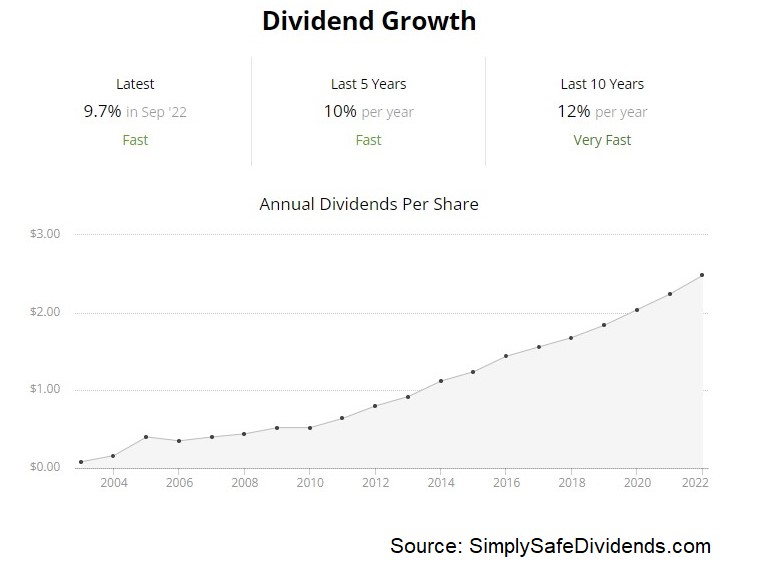 This is the 20th consecutive year of dividend increases for the multinational technology corporation. Microsoft’s dividend growth pedigree is among the best out there, especially in tech. The 10-year DGR is 12.3%. And they’ve been super consistent with this, showing no marked deceleration in dividend growth.

However, the stock’s lowish yield of 1.1% is the big drawback here. But this is a long-term compounder, not an income play. And with a payout ratio of 28.2%, I suspect there’s a lot more compounding to come for the dividend.

Is Microsoft cheap? No. But why would it be?  This isn’t some unprofitable tech play using buzzwords to distract from the fact that it’s a terrible business. Microsoft is one of the biggest, best, and most profitable companies in the entire world. I’ve been hearing about how expensive Microsoft is for at least the last five years, yet the stock tripled compared to five years ago. 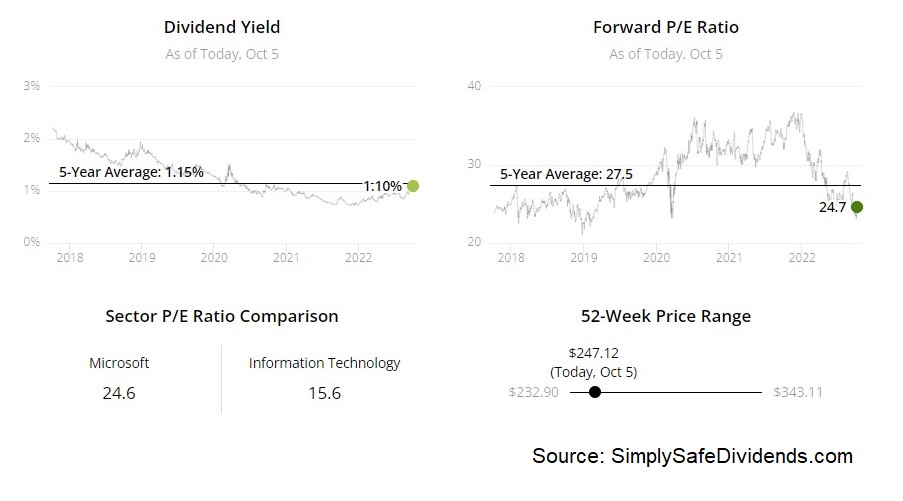 Why? Because the business continues to grow at a high rate, which supports that dividend growth. The P/E ratio of 25 is on the high end of what I’d personally be comfortable with, but the stock’s five-year average P/E ratio is 37. We are 12 turns under that. I wouldn’t be backing up the truck on Microsoft, but I do think it could be buyable once again after seeing its stock price drop nearly 30% YTD.

The fifth dividend increase I want to cover today is the one that was announced by Starbucks Corporation (SBUX).  Starbucks just increased its dividend by 8.2%.

Starbucks is giving you hints that it’s a dividend growth all star ready to keep handing out more bucks to shareholders. The company’s logo is as green as money. And, I mean, the word “bucks” is right in their name. In case that didn’t tip you off, this most recent dividend increase, which follows up many before it, should probably do it.

The multinational coffeeshop chain has now increased its dividend for 12 consecutive years.  The company’s 10-year dividend growth rate is 19.6%, which is outstanding, although more recent dividend increases have been in a range of between 8% and 10%. 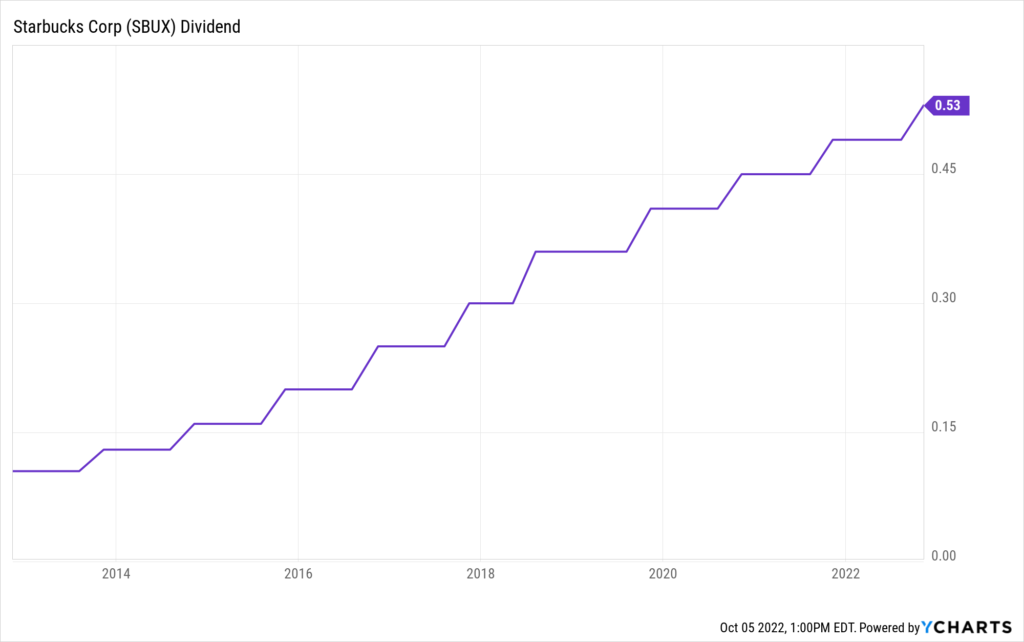 Still, that’s more than enough dividend growth to get the job done when you pair that with the stock’s yield of 2.3%. This yield, by the way, is 40 basis points higher than its own five-year average. And Starbucks has a well-covered dividend, supported by a payout ratio of 59.7%.

The stock has had a nice bounce from its low, but it’s still well off of its high.  Below $70, I think this stock was a steal. But even here, priced at about $86, the stock doesn’t look expensive at all. That’s significantly lower than its 52-week high of almost $118.

However, this is all pricing. What about value? Well, our recent analysis and valuation video on the business shows an estimate of intrinsic value for Starbucks at slightly over $98/share. Price is what you pay. And value is what you get. Based on what I see here, Starbucks stock is offering plenty of value. And this most recent dividend increase only reinforces that idea.

Last but not least, I have to talk about the dividend increase that came in from Texas Instruments Incorporated (TXN).

Now, this particular increase wasn’t quite as impressive as some of the past increases from Texas Instruments, but we have to keep in mind that we’re in the middle of unprecedented global economic turmoil. The fact that the company still came through with a near-8% dividend increase speaks volumes about their commitment to shareholders. 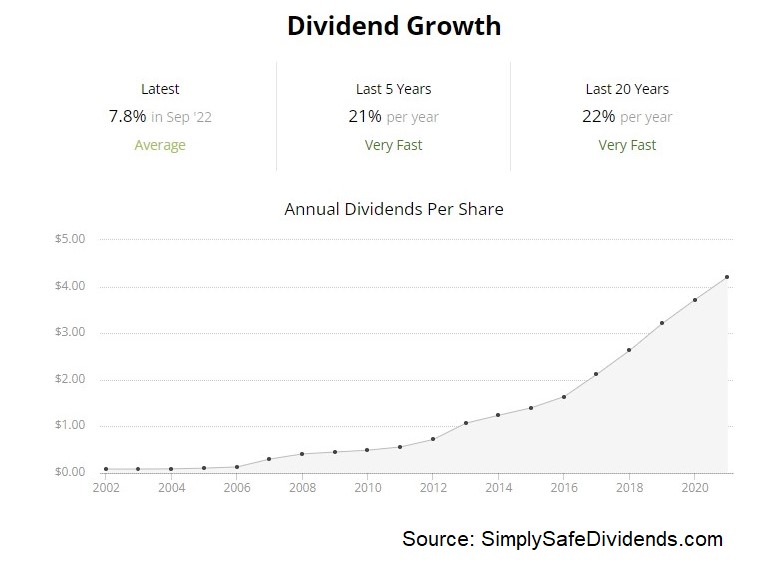 The technology company has now increased its dividend for 19 consecutive years.  Texas Instruments has been so incredibly reliable with the dividend and the growth of it. The 10-year dividend growth rate is 21.5%, but there’s been a deceleration playing out in recent years. I wouldn’t continue to expect 20% annual dividend raises from Texas Instruments.

On the other hand, Texas Instruments is usually good for a low-double-digit dividend increase every year. It’s not realistic to base everything on this year, which is a very strange year. That said, even if Texas Instruments were only handing out 8% dividend increases per year, it’s hard to complain about that when you get a 3.1% starting yield. And the payout ratio is 54.3%, almost perfectly balancing retaining earnings for business growth against returning capital to shareholders.

Texas Instruments has almost nothing to dislike. The dividend metrics are great, and the company also just announced a $15 billion buyback program – more than 10% of its entire market cap. Texas Instruments is about as shareholder friendly as it gets. 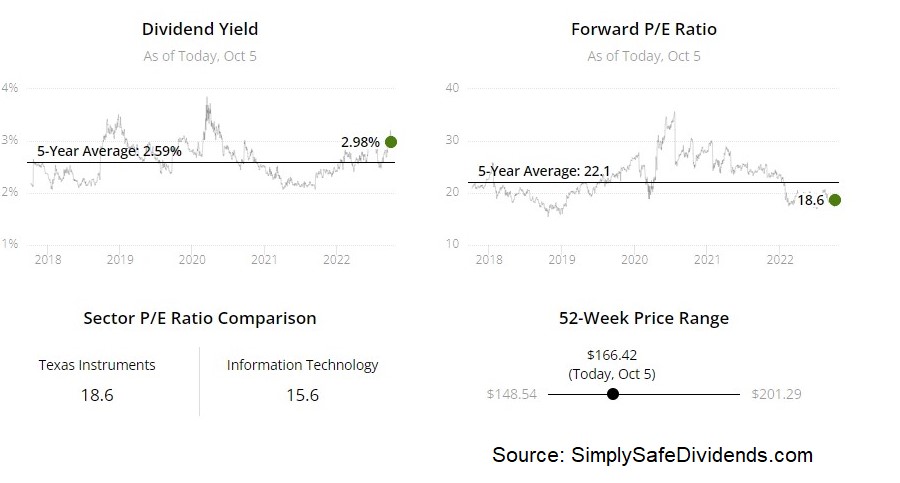 Meantime, the valuation is also likable. The P/E ratio of 17.5 is very undemanding for a business of this quality. Keep in mind, its own five-year average P/E ratio is 24. We are way off of that. Every other basic valuation metric I look at is telling a similar story of favorable dislocation. If everything is bigger in Texas, the long-term investment opportunity here with Texas Instruments could be quite big. Consider taking advantage of it.