On Tuesday morning, the U.S. Bureau of Labor Statistics reported that the Consumer Price Index (“CPI”) rose slower than expected…

And it’s causing a stir in the markets.

The CPI is a popular gauge of inflation. And slower-than-expected inflation could mean a number of things…

The simplest interpretation is that the rising prices we’ve seen lately in all sorts of goods and services is “transitory”… In other words, the pace at which prices are rising will continue to slow.

The logic follows that the Federal Reserve doesn’t have to worry as much about rising inflation… So it doesn’t have to stop buying assets or change its cheap, easy money policies anytime soon.

Is this interpretation accurate? If so, is it good or bad?

Time will answer those questions.

Today, we’re more interested in the drop in long-term interest rates… and what it could mean for investors.

The 30-year U.S. Treasury yield is the interest rate you can earn for loaning money to the U.S. government for 30 years. It’s a top benchmark for long-term interest rates… And it strongly influences corporate and consumer borrowing rates, like 30-year fixed mortgages, for example.

The chart below shows the 30-year U.S. Treasury yield along with its 50-day moving average (50-DMA) – its intermediate-term trend. As you can see, after soaring off of extremely low levels about a year ago, the 30-year yield peaked at 2.45% in March. A couple months later, its 50-DMA turned lower… And yields started to fall sharply.

Over the past two months, yields more or less moved sideways – with higher lows and lower highs – as the 50-DMA caught up to the falling yields.

On Tuesday, though, the 30-year yield broke that pattern of higher lows. It fell 0.45 percentage points – a sharp daily move. Take a look… 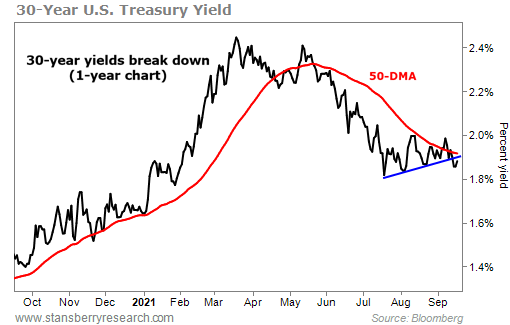 This is a common pattern…

An asset – or an interest rate, in this case – makes a big move… it trades sideways for a while as the markets “digest” that move… then, the trend continues as it moves in the same direction.

Of course, this move may not hold. Although it’s less likely, the 30-year Treasury yield could rebound, and the 50-DMA could turn higher.

But let’s consider what’s happening now instead of what might happen… and what it says about different assets right now.

Aside from that, lower interest rates mean holding hard assets that don’t pay interest – like precious metals – become relatively more attractive. Gold and silver were both up a bit on Tuesday. And if rates continue to fall, the prices of these precious metals should find their footing and start to climb.

Companies that borrow a lot of money to fuel growth – like technology firms – should continue to benefit from cheap borrowing costs. So these stocks are more likely to continue their uptrend.

As far as we’re concerned, this week’s CPI report wasn’t so surprising. But it sparked a drop in long-term Treasury yields… And that has effects all across the market.

These effects may not show up in asset prices immediately… But the trend gives us insight into where to look for investment and trading opportunities in the coming weeks.