Everyone loves to hate AT&T (NYSE:T) stock and with good reason.

The company has made poor acquisitions, has a lot of debt and its bloated dividend yield wasn’t enough to attract buyers. As a result, T stock has been a total dud over the years.

In fact, the only thing that has saved its performance is the dividend. Over the last 10 years, AT&T stock is down 1.7%. However, including dividends, the stock’s total return is 72.5%.

That lags the S&P 500’s return of 276%, along with Verizon (NYSE:VZ), which has generated a 142% total return in the last decade. Making matters worse, AT&T is cutting the dividend by roughly 40% as it undergoes another large acquisition.

For many investors, that was the final straw. Shares have lagged badly since the news broke in May, even as the overall market continues to hit new highs.

But is this the wrong reaction?

Reason One: Investors Get More Assets

Personally, I’ve kind of always liked AT&T. It yields 7.65%. Even if its stock goes nowhere, that’s a decent return for an income stock. The kicker would be if it rallied, but the market refused to pay any sort of premium. Shares trade at just 8 times earnings, which shows no faith in the company.

In any regard, AT&T is acquiring Discovery (NASDAQ:DISCA), combining it with its current media business and spinning off the whole entity in a tax-free transaction.

AT&T’s acquisition of DirecTV was horrendous. However, its acquisition of WarnerMedia was brilliant, yielding it the precious HBO. Combined with Friends — the No. 2 streaming show on Netflix (NASDAQ:NFLX) before it was removed and put on HBO — and tons of other content along with HBO’s content, AT&T has a huge asset in streaming.

We’ve seen Netflix take off, as well as Disney, Roku (NASDAQ:ROKU) and Amazon (NASDAQ:AMZN). One of the only streaming plays to not take off? AT&T.

The hope is that the Warner/HBO unit combined with Discovery will yield an entity that sees more explosive gains in the stock price. Current AT&T investors will receive a piece of that spinoff, which should create value.

This one is a little touchy, but the dividend here is still pretty attractive. In its post-split world, AT&T plans to cut its dividend payout from about $15 billion to roughly $8 billion.

That’s about a 40% haircut. At its current price, that translates to roughly a 4.5% yield, but it’s hard to say without knowing the final stock price.

In any regard, a ton of the company’s cash flow was coming from its media business. So if it’s spinning this unit out, it’s simply too much of a strain to maintain such a payout.

That must have been a difficult decision, given that AT&T has raised its dividend every year for more than 30 years.

Regardless of the broken streak, AT&T will still pay a respectable dividend. That’s on top of investors getting a piece of the spun-off company, giving them a better chance to collect a yield and see some stock appreciation. 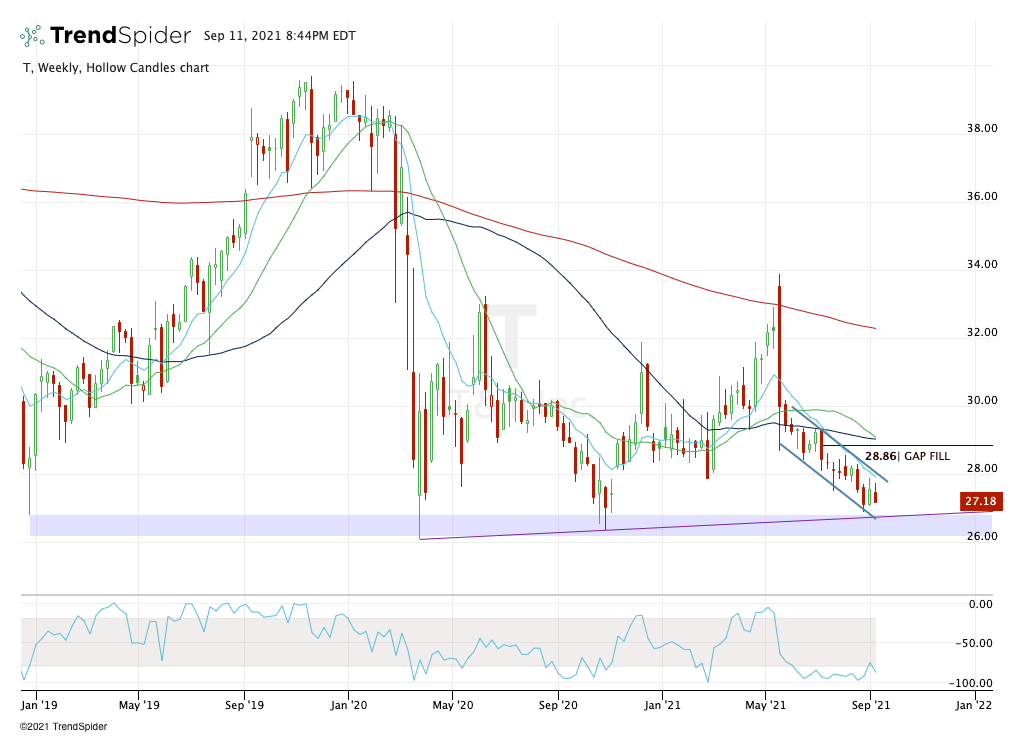 Now you’re really going to be mad at me. First I use the soon-to-be-cut dividend as a bullish catalyst, then I use the chart, even as T stock remains locked in a brutal downtrend.

You can see that downtrend highlighted on the chart inside the blue channel lines. This is a weekly chart, so it’s impossible to tell that there is a gap up at $28.86.

Should T stock pop out of this channel, I will have my eye on that level, along with the declining 21-week moving average.

Otherwise, what’s so bullish about this chart?

To be honest, not very much. In fact, as a trader, there’s nothing attractive about a long setup in T stock right now. For an investor though, there may be.

The stock is dipping to an area where it has historically been considered a value play. Put another way, the $26 to $26.50 area has been a zone where investors consider T stock too cheap to ignore.

Each test of this zone has resulted in a big bounce. Now, I don’t know that we’ll get that same reaction this time around. The tables have been turned significantly with the spinoff news.

At the very least, this area represents a low-risk opportunity to get long. It’s up to investors if they want to hold onto T stock on a potentially larger dip.