I recently showed my Straight-Up Profits readers how looking for the shift in momentum, technical trends, and volume will always show you which stocks are about to experience a sudden, steep spike – a breakout – and how as traders, we can make money whether that spike goes up or down.

These breakout stocks have some signatures that are telling of upcoming activity. In the same way that your reflexes kick in when the doctor hammers your knee, a stock will react aggressively when those three specific things happen at the same time, which I’ll explain in more detail in a minute.

So today, I’ll be sharing with everyone two low-dollar stocks that fulfill the above criteria… and how you can profit from them.

These two penny stocks are “in play,” and I’ll give you the exact prices to buy in…

As promised, let’s quickly review the criteria I mentioned above before we dive into my first recommendation.

So when I say shift in momentum, I’m specifically talking about a shift in momentum within normal distributions. It’s not a spike because we’re predicting the spike and positioning ourselves to profit before the spike happens. Instead of a spike, the statistics are completely normal. This part is absolutely crucial – the statistics must be normal.

“Normal” activity means that the prices are moving within a certain tolerance, like Bollinger bands, also known as the volatility bands. By tracking normal distributions, we can also predict when the stock will make an unusual breakout.

The two most-watched trends are the 20- and 50-day moving averages. Typically, a bullish crossover will precede a bullish breakout, and a bearish cross under suggests an upcoming breakdown.

Our third and final sign is increasing volume while technicals are shifting. Volume shows that the market is participating in the price surge – it’s what turns a price surge into a profitable opportunity.

And now that you have a clear idea of our strategy, let’s get into my stock recommendations…

First up, we’ve got Bombardier Inc. (OTCMKTS: BDRBF), which you should buy at around its current price of $1.14. Based in Montreal, Canada, BDRBF was once a manufacturer of commercial jets, public transportation vehicles, and trains.

But it’s downsized its business, and today it focuses solely on private jets.

Take a look at the stock’s chart: 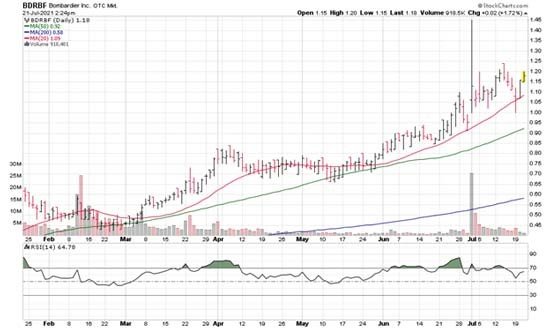 As you can see, around mid-February, the momentum started to shift, thus fulfilling our first criteria: the shift in momentum.

Finally, the volume spiked in July, fulfilling our third criteria, and causing shares to explode vertically up.

But now volume is on the decline, and we’re going to see a pullback.

Next up is Atlanta, Ga.-based Health Discovery Corp. (OTCMKTS: HDVY), which I’m looking to buy at around $0.35.

HDVY is another stock that’s exhibiting all the signs we just went over. 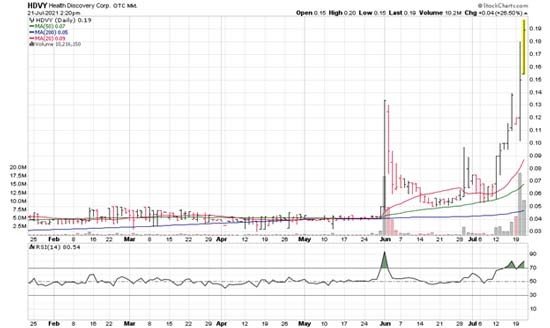 But around late April, we saw a bullish crossover in the technical trend lines. Two months later, we saw a major spike in volume, causing shares to rocket up to the $0.13 range.

After the “crescendo volume” – which is the volume surge – you see a sharp decline in the stock, and we saw that in June with HDVY.

But shares were still trading within a normal distribution and yet another volume surge caused prices to spike all the way up toward the $0.40 level. Now that the crescendo volume has happened, it’s currently too late to get into this stock.

We have to wait for it to drop a bit. I recommend that you wait until HDVY drops down to around $0.35.

But keep in mind, this could change if the trend continues to move higher and higher. I’ll be sure to keep an eye on both of these stocks and update you if there are any major developments.