You know, there’s a lot to like about Tesla Inc. (NASDAQ: TSLA) as a company.

Its outspoken CEO, Elon Musk, might not be everyone’s cup of tea, but he’s undeniably smart and creative, which shows in pretty much everything he does, from cryptocurrency to flamethrowers to electric cars to rapid transit to actual spaceships. There’s no denying he’s got a lot of promising irons in the fire, and Tesla’s a red-hot one.

Tesla – a household name already – has been in the black, profitable, for more than a year running now. Tesla’s market cap of nearly $600 billion is more than the next eight or nine largest automakers combined, and twice that of the second-biggest carmaker, Toyota Motor Corp. (NYSE: TM) – even though Toyota sold something like 19 times as many cars as Tesla in 2021.

Tesla has a powerful “first-mover” advantage in the roughly $170 billion global electric vehicle (EV) market – a market that’s set to grow 22% a year until it hits $802 billion in 2027.

It’s Tesla’s game to lose… and it still might.

Because, despite everything it’s got going for it, buying TSLA stock isn’t the best move you can make in the EV sector anymore.

From a profit-hungry investor’s point of view, Tesla’s a victim of its own huge success – more than 1,528% in gains over the past five years. In 2020, Tesla delivered almost 500,000 electric vehicles – the most of any automaker – as total EV sales rose by 43%. That was a huge reason why TSLA shares piled on around 695% in gains for the year.

You simply can’t count on that kind of growth to keep playing out like some great movie you never want to end.

I’m not saying it’s not a great stock to own, and I’m definitely not saying you should sell it; I am saying don’t buy it at $610 or $620 and expect to pocket triple-digit profits. Its profit potential doesn’t live up to the headlines anymore, no matter what you might hear.

The next radical outperformer is out there, and I believe I’ve found it. It’s Shanghai, China-based NIO Inc. ADR (NYSE: NIO).

Meet the Tesla of China (and Europe)

China is the epicenter of global EV market growth, and the numbers from Pew Research back that up. Forty-four percent of electric vehicles on the planet drive China’s roads, compared with 31% in Europe and barely 17% in the United States.

For most of the past few years, the fastest EV market growth has been in Europe, but growth in China is starting to gather a head of steam; Canalys is projecting Chinese EV sales to jump another 50% in 2021.

NIO is in the best position to capture growth in China, Europe, and the United States, because it has a presence in all three retail mega-regions.

NIO isn’t a household name like Tesla yet, but that hasn’t stopped its stock from absolutely smoking TSLA. Since mid-May, NIO stock has jumped 50%, while TSLA shares have risen by just 8% – a mighty choppy 8%.

And while the brand may be far less-known than Tesla, NIO stock has outperformed TSLA over the last several weeks. Since mid-May, NIO shares have boomed by more than 50%. In that same time frame, TSLA has risen by just roughly 8%. 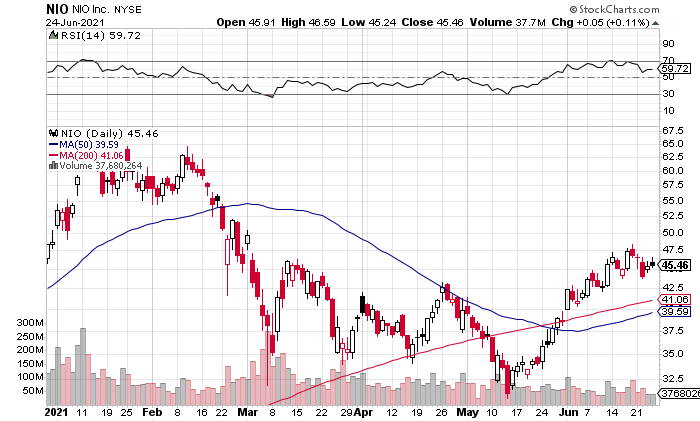 NIO shares’ technical picture has been steadily improving since early June, and it’s comfortably above 50- and 200-day simple moving average trend lines. It’s punched through the Ichimoku Cloud, to the upside, and its relative strength index (RSI) reading shows the current trend has a way to go before it starts to run the risk of reversing.

Investors have reacted positively to a few bullish news items, too…

I think NIO is perfectly positioned to deliver big EV profits over the next several years, and a growing group of mainstream analysts is starting to agree.

Incredibly, shares can still be had for a discount. NIO stock fell from a high of $66 in February down to $33 in May, and it’s trading for just $45 as of midday [Tuesday]. I’ll buy a $66 stock with this kind of potential all day long – and so should you. It could be one of the most profitable EV stocks of the next decade.