Stocks are soaring, and interest rates are low… so who wants to own bonds?

I get it. This isn’t a sexy idea. But the time to buy long-term U.S. Treasury Bonds is now.

You see, bonds have taken a beating this year…

Importantly, the recent collapse led to a new 52-week low. Normally, we might expect this to mean more pain is ahead for bonds. But history shows that’s not the case…

Bonds are set to outperform over the next year. And that means it’s actually time to buy bonds today.

Bonds are never exciting. And these days, with the Melt Up driving stocks to new highs, they’re even less attractive. But that wasn’t the case a year ago.

The iShares 20+ Year Treasury Bond Fund (TLT) holds a basket of long-term Treasury bonds. And it thrived during the early days of the pandemic.

TLT was up 14% while U.S. stocks were down 34% from February 19 to March 23, 2020. These safe bonds were what everyone wanted to own as COVID-19 took the global stage and spooked investors.

Now, things have changed. With vaccines rolling out and potential normalcy returning in 2021, TLT is crashing.

Investors are bidding up stocks and bailing on safety plays like bonds. Interest rates have been rising, and that has crushed bond prices.

This major shift has sent TLT to its lowest level in years. Check it out… 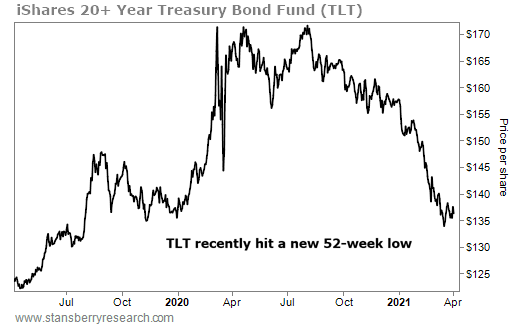 The recent fall has wiped out all of TLT’s early 2020 gains. Again, the fund is down double digits this year. But history shows the downturn is almost over…

Since 1990, hitting a new 52-week low has signaled a turning point for bonds. And it could mean outperformance over the next year. Take a look…

TLT has returned 2.7% in a typical year since 2002. That’s what you would expect from a boring bond fund. But by buying after TLT hits a 52-week low, you could have locked in much stronger returns…

Buying after similar setups has led to 2.5% gains in six months and a 5.1% gain over the next year. While those aren’t huge numbers, it’s much better than a buy-and-hold strategy.

Now, bonds are still in a downtrend. Prices have only begun to level off. But given how bad the fall has been, it’s possible we’ve already seen the bottom. And shares of TLT are the easiest way to take advantage of it.

I know it’s not exciting. But history shows the recent bloodbath in bonds could be over soon. And when the trend turns, bonds – and shares of TLT – are likely to outperform.