Penn National Gaming (NASDAQ:PENN) has been on fire. However, Penn stock has suffered a painful dip since the beginning of last week, down about 20%. That said, let’s use dips like this to our advantage.

Seeing these types of declines should excite investors, not scare them. It should be like when your favorite store holds a nice sale, the kind that says “come in, grab it while it’s hot!” Not one that says, “Going out of business, thanks for your support.”

Penn National Gaming isn’t going out of business — not even close. So, let’s look for dips in the stock to justify getting long.

The Reopening Trade and More

The reopening trade has been on fire, and it’s been that way for months.

Cruise, airlines, retailers and others have been on a big run. Consumers have been bottled up for a year now, just itching to get out. In anticipation of that burst of activity, investors have been bidding these names higher with relentless force.

However, Penn National Gaming has had an even larger spark behind it.

With its stake in Barstool Sports, there’s an added catalyst to Penn versus solely operating as a casino. Furthermore, the momentum in online sports gambling has given Penn and Barstool even more momentum.

Combining these novel coronavirus catalysts (for example, online sports gambling) with the reopening trade (like casinos), and it’s simple to understand why Penn stock has so much momentum at the moment.

Penn National Gaming recently hit an all-time high of $142. After bottoming at $3.75 on March 18, we’re talking about one incredible recovery. A 36-fold return in less than 12 months is stellar. In fact, it’s potentially life-changing depending on whether investors had the patience to stay invested in the name.

What drove the rally? To answer that, we should consider what caused that big of a dip in the first place. To fall 90% in just one month has to involve a special kind of worry. Obviously, the peak-to-trough decline of 35% in the S&P 500 is a worry.

But to go down 90% usually takes the concern of bankruptcy.

Additionally, liquidity was a major concern for Penn. The company came into the pandemic decline in a poor position. Its current liabilities outweighed current assets and Penn was fresh off its deal with Barstool.

In 99% of other scenarios, the balance sheet wouldn’t have been a concern. But throw in revenue shutting off virtually overnight and cash-strapped companies end up in a real pinch.

So again we ask, what drove the rally?

In this case, the rally response is two-fold: Management raised fresh capital and addressed the short-term liquidity concerns. Then we had the coronavirus and reopening momentum carry the stock higher from there.

While that admittedly puts Penn stock at 46 times forward earnings estimates, keep in mind, this company has solid long-term growth potential. That includes clauses to increase its stake in Barstool Sports and with that, the opportunity to increase its market share in online gambling.

Additionally, get a look at the new balance sheet.

At year-end 2019, Penn came into 2020 with current assets of $642.8 million and current liabilities of $905.6 million. The latter was 40% higher than current assets, creating the short-term headaches.

One quarter later, current assets almost doubled to $1.27 billion. By year end, current assets were over $2 billion, while current liabilities were actually down about 5% year-over-year to $860 million. 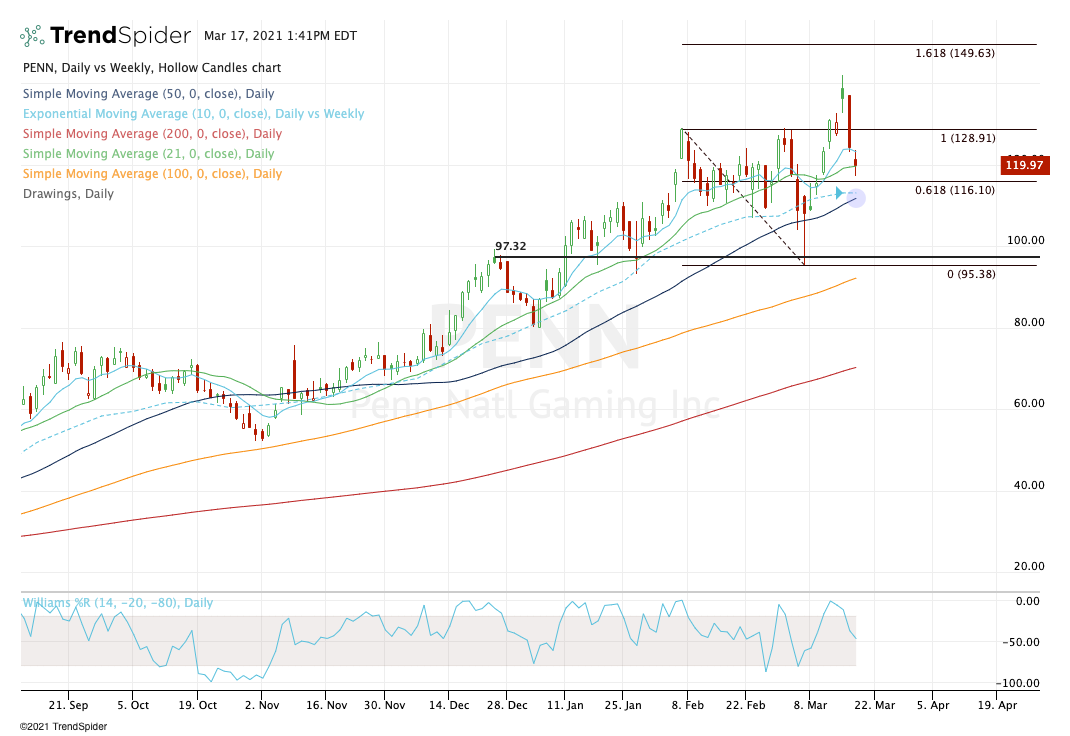 At the end of the day, we have a 3,000%-plus rally in Penn stock. However, it really breaks down to an argument of insolvent vs. illiquid.

It’s the famous question from famed banker John Pierpont (JP) Morgan when he was deciding whether a firm was worth rescuing. In the case of Penn stock, it was merely illiquid; not insolvent.

As it pertains to the charts, look how quick we’ve seen shares unwind from the recent high. A quick two-day dip took more than 20% off the stock from its high.

The risk of waiting for a deeper discount? Waiting too long.

That said, Penn stock dipping lower should have bulls perking up. There it finds the 10-week and 50-day moving averages, which have been support for months now.