I know you won’t want to hear today’s message…

The Melt Up is driving U.S. stocks to incredible heights. But there’s another market, on the other side of the world, that’s primed to outperform the U.S.

The idea of putting money to work outside the U.S. at a time like this probably seems crazy. But it’s actually a smart bet, as I’ll share today.

That’s because Japanese stocks are coming off a rare setup. They recently traded for one of their largest discounts to U.S. stocks on record. And they’re still trading at a 61% discount today.

A valuation gap this wide has only happened a handful of times over the last two decades. Each time was a bullish sign for Japanese stocks.

And it means that Japan’s market is set to outperform the U.S. from here.

The price-to-sales (P/S) ratio is one of the simplest valuation measures. That’s because it only has two inputs… the price of the stock and the amount of revenue it brings in.

Don’t be fooled by that simplicity, though. The P/S ratio does a good job at telling us how expensive or cheap a market is. And it can be incredibly effective at highlighting valuation anomalies.

While the gap has been slightly wider in recent months, this discount is still near record levels. You can see how rare it has been over the past 20 years. Take a look… 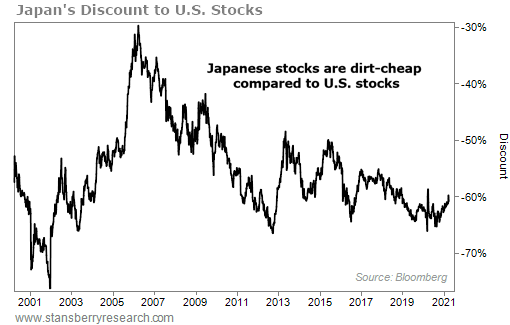 When this discount has gotten deeper than 60%, it has often flagged buying opportunities for Japanese stocks. Let’s quickly take a look at a few examples over the past 20 years…

In early 2002, this valuation gap hit its widest spread on record. Japanese stocks traded near an 80% discount to their U.S. peers. Then, the gap started to close… And Japan’s market started to outperform the U.S.

That’s not the only time we’ve seen a major move like this, either…

These kinds of setups have happened before years of outperformance in Japanese stocks. And while this ratio technically bottomed back in late 2020, we are still seeing crazy levels between these markets today.

If you’re interested in taking advantage of this setup, you can do it easily with the iShares MSCI Japan Fund (EWJ). This simple fund tracks the overall Japanese market.

If you’re interested in putting money to work outside the U.S., Japan is a place to consider today. And shares of EWJ are an easy way to take advantage of it.