Investors who shy away from tech stocks are missing a great opportunity in front of them. That’s particularly true with companies like Nvidia (NASDAQ:NVDA). In this case, it’s key to separate Nvidia the company from NVDA stock.

One of them matters and one of them — to an extent — doesn’t.

The short-term gyrations of NVDA stock is just noise. That is to say, it doesn’t matter what the day-to-day or even the week-to-week price action looks like. We are interested in the business, the top- and bottom-line momentum, and the secular trends.

Thankfully for Nvidia, all of these things are moving in the right direction. The reason I say the stock doesn’t matter as much as the business is simple. As long as the latter is doing well, the former will ultimately take care of itself.

You’re Not Buying at the High 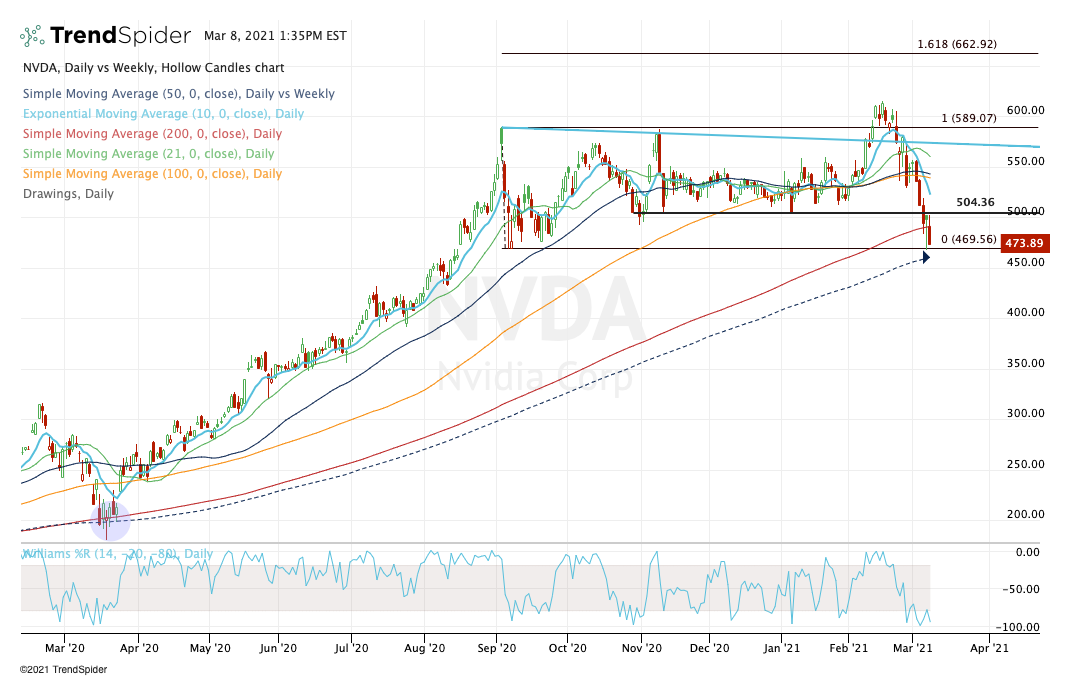 A look at the charts above shows the price action that longs have endured over the past six months. Shares started to erupt in February 2020 only to see that rally fizzle out before it was even able to gain momentum thanks to the novel coronavirus.

I say “endured,” but in reality, life has been pretty good for the bulls. First, NVDA stock only pulled back to the 200-day moving average amid that brutal first-quarter-2020 decline, while the rest of the market was obliterated.

A few months later, NVDA stock topped out just shy of $600, a 200% gain from the lows in about six months. Since then though, shares have been trading sideways. More recently, we have a test into the 200-day and 50-week moving averages, with shares down 17% from the February highs.

Nvidia is now back to the same levels as its September lows, as it tries to find its footing. For long-term investors, this dip following a multi-quarter consolidation period is an absolute gift.

There’s no other way to put it.

The Fundamentals Are Wonderful

Nvidia has had so much momentum over the years, it’s reasonable to think its best days have already occurred. But that couldn’t be further from the truth.

We’ll get to Covid-19 in a minute, but let’s start more broadly with technology. The needs and demands from the tech world are only growing, not shrinking. Computers constantly need to be faster, data continues to expand not shrink and graphics are constantly improving.

These are things that aren’t going to change. Social media and data creation are going to continue expanding. No one is going to wake up one day and say, “Man, I wish these graphics were a little worse like five years ago.”

As technology continues to improve, companies continue to need the best — and that’s Nvidia.

The company doesn’t have its hands in one or two secular growth themes, it has them in multiple. Electric and autonomous driving, the datacenter and cloud, graphics, computational power, A.I. and machine learning, drones and robots — the list goes on and on.

Then there’s mergers and acquisitions.

Recently there’s been some pushback in the technology community regarding Nvidia’s attempted $40 billion acquisition of Arm.

Should it land this entity, Nvidia will be a juggernaut. While that alone isn’t necessarily an antitrust concern, regulators may take issue with an unstoppable company. It’s always a risk Nvidia doesn’t land Arm, but if it does, it’s a huge long-term catalyst.

Finally, how about its growth?

Circling back to Covid-19, the pandemic caused a frenzy of buying for Nvidia’s products. As a result, instead of seeing a dip, we’ve seen an acceleration in revenue and earnings.

The company exceeded what analysts expected for fiscal 2022 in fiscal 2021 (the most recent year) — more than a year ahead of schedule.

I don’t think Nvidia gets enough credit in regards to its growth. The company is forecast to generate $22.1 billion in revenue this year, up 32.5%. On the earnings front, estimates call for earnings of $13.36 a share, up 33.6% vs. last year.

Consider this, though. At the start of 2020, the two-year forward revenue estimate was near $15 billion. Now set to come in far ahead of that figure, NVDA stock has easily surpassed what anyone has expected.

Primed for another year of 30%-plus revenue and earnings growth, there’s no reason for long-term investors to bail on this name — particularly after more than six months of flat price action. That’s why I don’t really have an issue with paying 37 times this year’s earnings estimates and am enthusiastic about long-term investors buying the dip.