When I think about how I built a successful career and put myself in a comfortable financial position, it is clear to me the role my parents played.

They helped pay for my university tuition, making it an easy decision for me to pursue a secondary education.

They also let me live at home while I went to university. That further eased my financial burden and let me focus on my studies.

And they were excellent financial role models. Most importantly, they taught me to never live beyond my means. That saved me from digging a debt burden for myself early in life that was hard to get out from under.

A good friend of mine was not so lucky.

Everything I had, she didn’t have.

She had next to no support from her parents. There was no help financially for school. Once out of high school, she was expected to get a place of her own to live in.

As financial role models, her parents could not have been worse. They lived big and saved little.

Sent out on her own with no financial guidance, role model to emulate or financial assistance, my friend did what many young people do…

She moved away from our hometown, and instead of adjusting her lifestyle and living within her limited means, she did the opposite.

She started enjoying life. And in the process, she rang up credit card bills that became impossibly big for her to handle.

With her never having much money, when she got her first credit card, it felt like she had won the lottery.

For her, it meant she could buy everything that her heart desired. She wasn’t being greedy – she was just a kid who didn’t know any better.

By the time she learned how ruinous the 20%-plus interest rates on credit cards could be, it was too late.

She had dug a financial hole that she couldn’t escape.

I’m gutted thinking about it.

I was on the other end of the telephone more than a few times after she realized that she was trapped. The happy, optimistic person I knew was gone.

It cost her the ability to pay for university. It unquestionably changed the course of her life.

It was sad to watch because she was hardworking and smart.

The only difference between her and me was that I had been blessed with parents who helped me out and were great financial role models.

I sent her some money a couple of times to help, but my pockets weren’t deep enough to make a difference. If I could go back in time, I would send more. I didn’t know how inescapable the hole was that she was in.

I haven’t talked to her in years, but I fear she lives a life full of regret. She had plans for a career and the smarts to achieve it. It doesn’t seem fair that 18 months of financial foolishness at a very young age destroyed those plans.

Had just one person taught her the dangers of credit cards before it was too late, her life would have been completely different.

Uncle Sam Has Also Gone Down a Dangerous Path

I thought of my old friend when I saw the chart below.

The chart compares the amount of income that the United States federal government brings in with how much it spends. 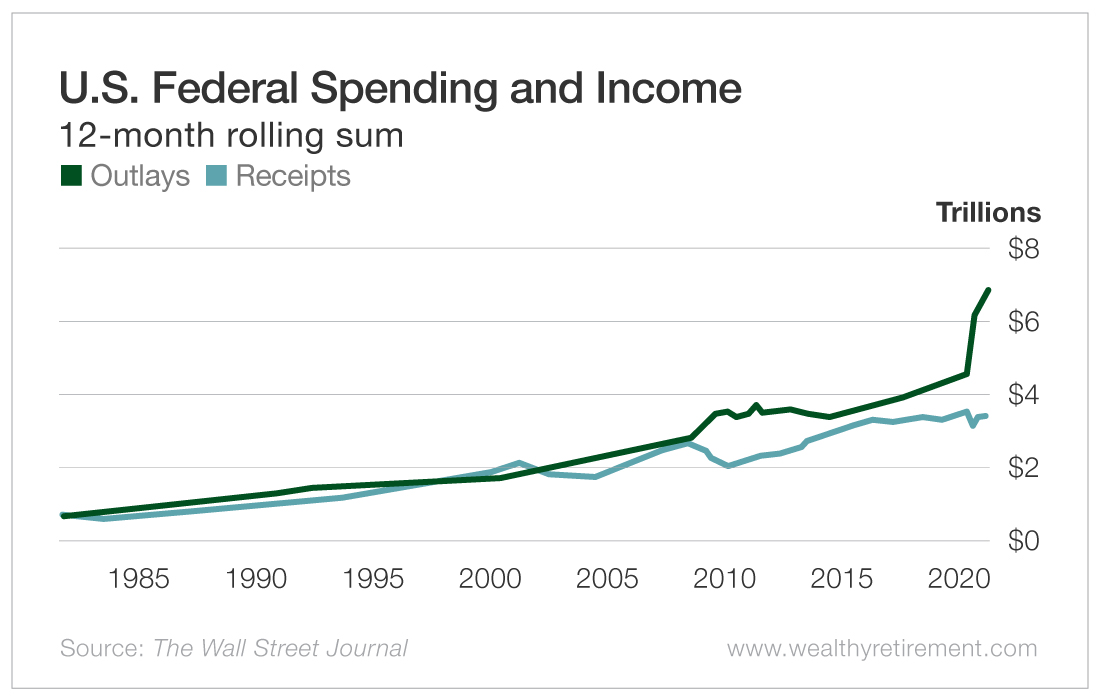 The chart shows how, relative to the past half-century, the degree to which the federal government has outspent its income over the past year is staggering.

From 1982 to 2005, the federal government pretty much lived within its means.

With the financial crisis in 2009, spending started exceeding income by a pretty wide margin.

But what has happened since the outbreak of the pandemic last year has taken things to a whole new level.

The country has lived more than $3 trillion beyond its means.

Now, I’m not criticizing anyone.

I don’t know what the perfect solution to an unexpected pandemic is.

What I do know is this…

My friend learned the brutally hard way that there are consequences for spending far more than she was bringing in.

Let’s hope the consequences for the U.S. government doing the same thing aren’t as severe.