Fastly (NYSE:FSLY) was an unknown on Wall Street coming into 2020. Or at least that’s how FSLY stock traded. When the novel coronavirus hit, no one seemed to want it, with shares trading down into the $10 range.

It rebounded with the rest of the market, roughly doubling in short order. But then something incredible happened: Fastly stock caught on fire.

Shares erupted on earnings, climbing 40% in a single session in May. Two weeks later, the stock added another 40% to its gains. Two months later and FSLY stock had gone from a stock in the $20’s to one north of $100.

Obscure no more — everyone on Wall Street knew this company. And they still should.

Fastly operates as an edge-cloud provider. In essence, some tasks need to be performed in the cloud, but not in the central cloud. As better performance comes to life (and inevitably, as more tasks require faster response times and more data), these functions are taking place in the edge-cloud to provide better results.

Think about an autonomous car that needs near-instantaneous response with little to no delay. We can wait a few seconds to have a web page load in most instances — an autonomously operated car cannot wait that long.

As more functions take place in the cloud, it means more business for Fastly. This company had a full head of steam and for good reason: the novel coronavirus drastically accelerated multiple trends in technology. Be it work-from-home, gaming, streaming, e-commerce and more.

That accelerated Fastly’s business model too. That momentum was strong in Q3 until politics entered the discussion.

While Fastly wasn’t the target of the White House, Tik Tok became a focus for the Trump Administration. Due to the very real risk of being banned in the U.S., Tik Tok needed to find a new edge provider, which was a direct blow to Fastly because Tik Tok was its largest customer.

Tik Tok represented 12% of the company’s revenue — delivering a painful blow to lose that business.

Although this was a short-term hit, like other great growth companies that have a large revenue exposure to one or several of their top customers, Fastly will see that large exposure to any one firm fade over time. It’s just part of the growth phase and it’s something investors need to be comfortable with when companies are still young. 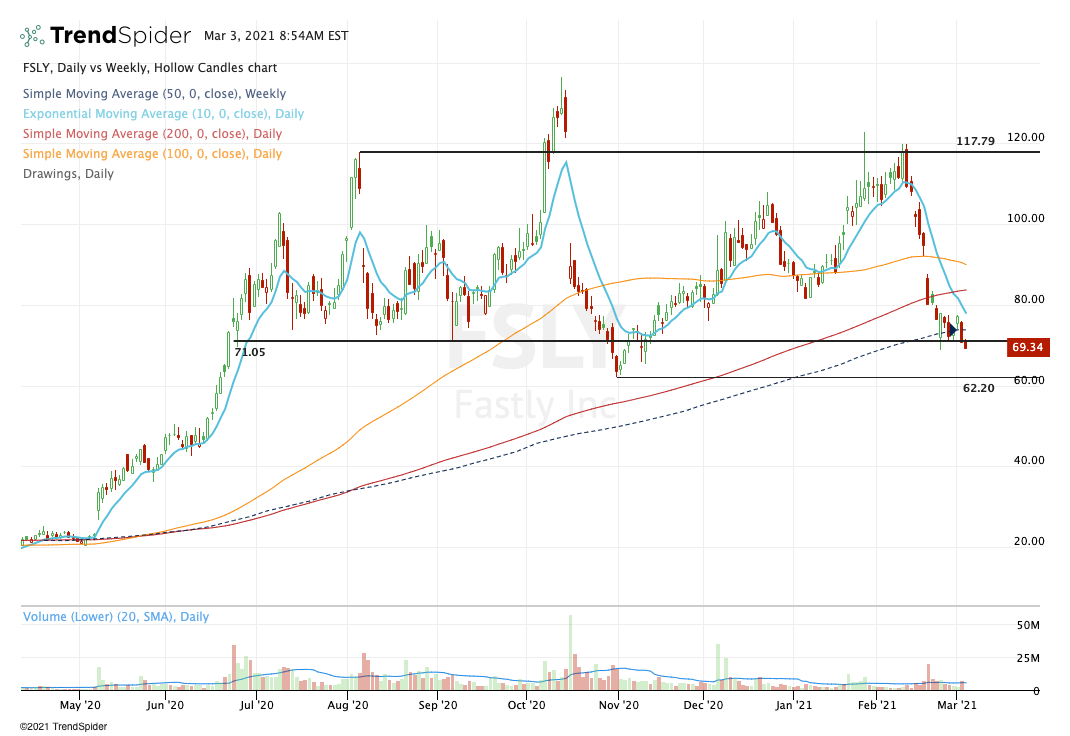 I think this next section is very important, because it’s where FSLY stock will draw the most heat.

Consensus expectations call for revenue growth of “just” 27% this year. That leaves Fastly trading at 18 times 2021 revenue estimates. For many investors, they will do one or two things.

Now, consider that a year ago, estimates for next year (FY 2022) stood at $335 million. So not only did estimates for this year drastically increase, but they’re about $50 million ahead of what analysts thought Fastly would generate in 2022 — a full year ahead of schedule.

So Fastly might seem expensive when you just look at the numbers. But imagine how the perspective changes when you say, the company’s 2021 revenue of $381 million (assuming in-line results for the sake of argument) beat 2022 expectations by $50 million.

In other words, we’re seeing a massive pull-forward in revenue for multiple tech industries. That’s why the stocks may seem expensive, but they’re doing what most thought would happen a year or two into the future and doing it right now instead.

We see it on the charts, too.

FSLY stock erupted higher and has now settled into a range. If we’re lucky, it will remain here until it’s time to rally once again. The recent dip sent shares right into the bottom of the range.

For now, buyers are responding. I want to too. Let’s use this opportunity to begin accumulating FSLY stock. If it goes lower, so be it. This is a multi-year growth story and the stock is likely to be much higher in several years as a result.

Don’t sell tomorrow’s winner today due to a lack of patience and an inability to see the bigger picture.