I know what you’re thinking…

This can’t go on forever, right? Aren’t all these new traders a sign that the Melt Up is almost over?

It’s true. Lately, we’ve seen hordes of new investors throwing caution to the wind. And they’re signaling that we’re closer to the end than the beginning.

These traders are exactly what we’d expect to see in the late innings of a Melt Up. I want to be clear, though… A frothy market like today’s is what the Melt Up is all about. And while I expect the bull market could end soon, anyone betting on an immediate peak is probably going to miss out.

I’m not trying to brush your concerns under the rug. If you’re worrying that a bubble in U.S. stocks is about to pop, you’re not alone…

The idea that we’re in a stock market bubble is growing in popularity. One way to see this is by looking at how much people are talking about it… or even better, at how many people are searching the term online.

Google’s search trends can show us interest in a search term today compared with the past. Recently, we’ve seen more searches for “market bubble” than any other time in the last five years. And it’s not even close. Check it out… 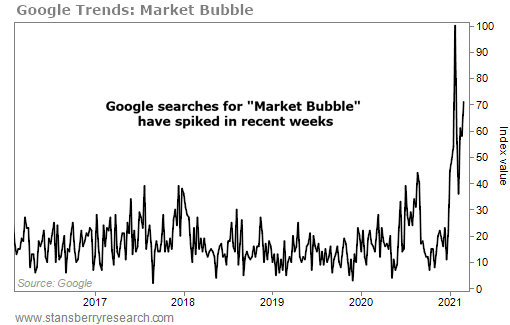 The scale goes from 0 to 100, with 0 indicating no interest in the topic and 100 indicating maximum interest. So the most searches ever would become the 100 mark, and everything else is based off of that.

The reading last month was 100. That’s the highest level on record… dwarfing any number we’ve seen in more than a decade. Said another way, more folks were thinking about a market bubble than any other time recently. It has really worked into the psyche of the typical American investor.

The number has come down in recent weeks. But we’re still at elevated levels compared to history.

Does that mean we need to run for cover in our portfolios? Absolutely not!

Again, we know we’re in the thick of a Melt Up. Bubble behavior proves that the thesis is playing out as expected.

Even more important, the biggest gains happen in the final innings of a Melt Up. Tech stocks rallied more than 100% in the final 12 months of the last Melt Up, during the dot-com era.

One of the worst things we can do is get out before the biggest gains take place. So while signs of market euphoria may be showing up, that’s normal in today’s environment. In fact, we want to see bubble behavior… because it will lead to our biggest gains.

It’s crucial to be aware of the coming Melt Down. But you can’t flee just yet. You want to ride the wave as long as you can.

Tomorrow, I’ll share a reason why stocks can still go higher from here.