And one of my favorite professional investors – Murray Stahl of Horizon Kinetics Asset Management – just made a really big contrarian call.

Stahl is pounding the table on the oil and gas sector.

He just called it “one of the few ‘once-in-a-lifetime’ investment opportunities that one can be fortunate enough to actually come across in a lifetime.”

Being bullish on oil and gas is not a mainstream view…

Far from it. Investors have been dumping shares of oil and gas companies for years.

The energy sector, meanwhile, has declined by almost as much. It’s down 70% over that same time period. 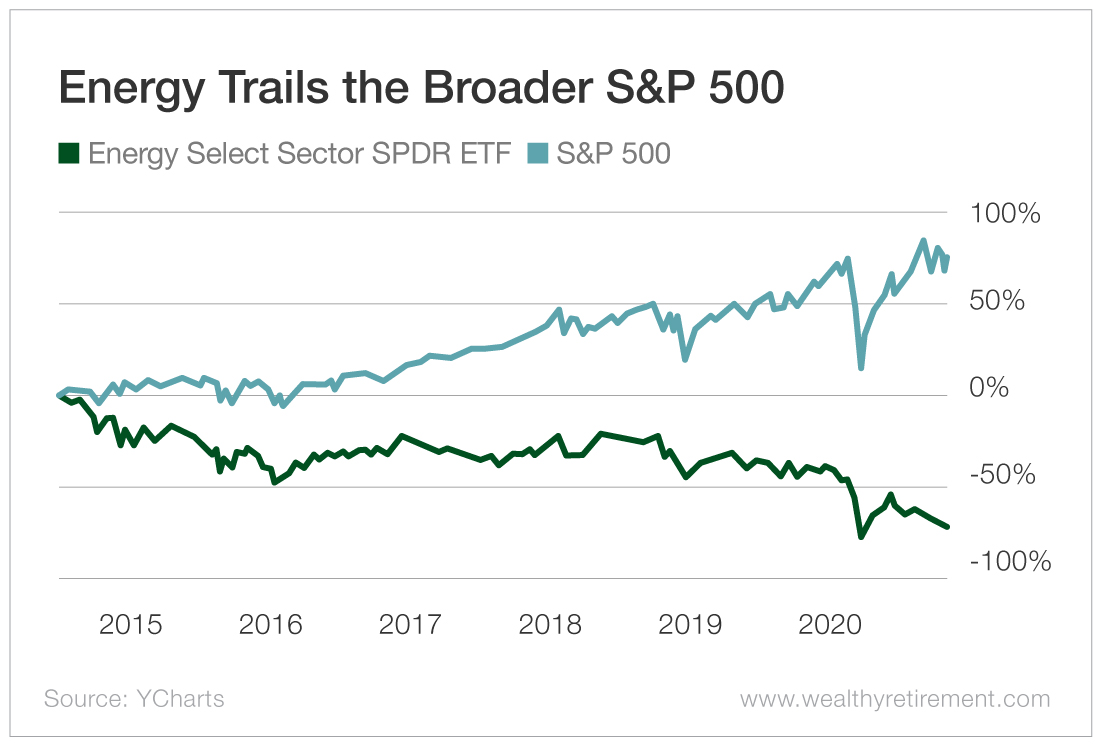 A similar investment in the Energy Select Sector SPDR ETF (NYSE: XLE) would have declined to just $2,900.

The consensus view is that prospects aren’t getting better for oil and gas companies going forward. Instead, investors expect the future for these companies to only get worse.

The 800-pound gorilla that has everyone scared to own oil and gas companies is the global plan (especially in the U.S. under a Biden presidency) to get off fossil fuels and adopt green energy initiatives.

Multiple sources suggest that fossil fuel use will be almost nonexistent by 2035.

If that happens, oil and gas companies will be worthless – so investors today aren’t willing to touch them with a 10-foot pole.

A Collapse or a Shock?

If he’s right, the opportunity is massive. These companies are trading at throwaway valuations.

Today, the energy sector represents just 2% of the weight of the S&P 500. That is just a tiny fraction of the 25% weighting that energy stocks had in the index in 1980.

While Big Tech companies today are priced for perfection in the stock market, the oil and gas sector is priced for failure.

But if optimism returns, there is a ton of upside in these stocks.

So what does Stahl see that others don’t?

With merger and acquisition activity heating up in the sector, it seems that oil company executives see a lot of value. Oil and gas aren’t dead, but the stocks in the sector are priced as though they are.

Stay tuned. I’m going to take a deeper dive on this sector and report back on any clear bargains I find.