Nike (NYSE:NKE) hasn’t side stepped the coronavirus selloff, with shares down 25% from the January high and 43% from peak to trough. However, investors shouldn’t look at the performance of Nike stock as a punishment, they should view it as a gift.

The coronavirus was sweeping across various parts of the world, but hadn’t yet hit the United States in early 2020. As a result, investors ignored the implications for the rest of world and bid up U.S. equities to new all-time highs in mid-February.

As we all know by now, it didn’t take long for the virus to hit the U.S. (which now has the largest number of confirmed cases).

The overall market was sold lower, dragging individual stocks down with it.

Of course, Nike stock was caught up in that selling, and even though it will suffer in the short term, the long-term potential remains.

Being a retailer is tough in this environment. There’s no other way to put it. Not only does Nike have to close down its retail outlets (as do a number of other retailers that carry its product), but discretionary spending will take a big hit.

Consumers may not feel the pinch in the first week or two of a lockdown. But by the time we are multiple weeks or months into the event, the effects will be felt. Millions have been put out of work. Assuming even under an optimistic view that they are back to work relatively soon, that money will be spent getting their bills squared away and taking care of necessities. For some, this may take months. They’re not going to buy a new pair of kicks instead.

That’s certainly a major negative, but not enough to outweigh the many positives for Nike stock.

First, the company is a leader. Not just in apparel, but in sports. At the end of the day, there is nothing that can break down the sports world. Yes, seasons may be postponed, delayed or even canceled. But in the long term, sports are a major focal point for the world. That won’t change, with or without COVID-19.

Second, Nike is among the retail elite — like Apple (NASDAQ:AAPL) in a way — that won’t vanish even amid a prolonged downturn. As other companies weaken, like Under Armour (NASDAQ:UAA, NASDAQ:UA), it only gives Nike more leverage over its competition.

It has built up decades worth of loyalty with its customers and use innovation to fuel growth. Those don’t vanish after a few months. 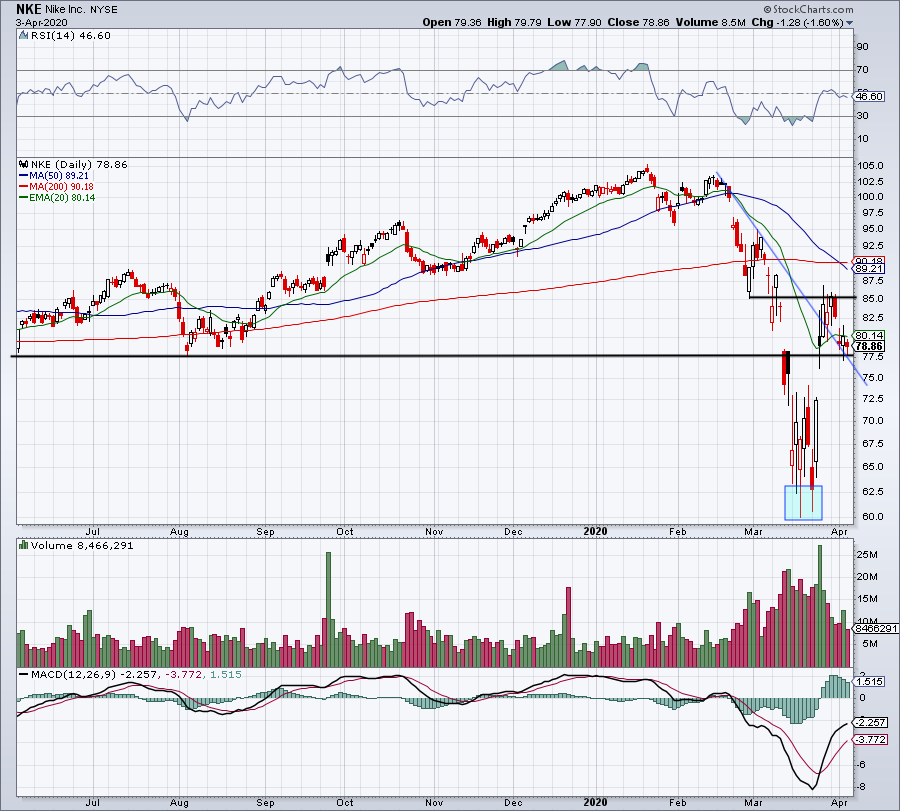 Nike reports earnings at an atypical time compared to the rest of the market. On March 24 — the day after the S&P 500 hit its low — Nike delivered a top- and bottom-line beat for its fiscal third quarter. Revenue of $10.1 billion inched higher by 5.1% year-over-year and beat estimates by more than $500 million.

At the time, the company said nearly 80% its stores were already reopened in China. Digital sales in the country were up nearly triple digits, as “pent up demand is unleashed.” Keep in mind, digital sales rose 36% overall in the quarter, too.

Analysts expect sales and earnings to tumble in the current quarter, down 18.9% and 63%, respectively. The hope is that this quarter is the trough for Nike’s business.

Nike will experience a slow down — that much is certain. I don’t know if it can top expectations and get back on its feet faster than expected. If it can, it will likely be due to China. This is Nike’s highest gross-margin region and is back up and moving ahead of other global economies.

If that’s the case, Nike could beat expectations and be back up and running faster than analysts and investors currently expect. This is a best-in-class blue-chip stock. Getting the chance to buy it on a deep discount of 25% to 40% is an opportunity for long-term investors.

Avoid These 5G Stocks Like the Plague [sponsor]
The 5G communication build-out is going to be the biggest, most important, most lucrative new “highway” built in our lifetimes. Yet most people are investing in it the WRONG way. Legendary stock picker Matt McCall reveals details about the best 5G stocks to buy now. Click here to learn more.