Silver fell more than 30% during its worst stretch last month.

You could replace the word “silver” in that sentence with just about anything, though. Gold, U.S. stocks, and foreign stocks were all getting clobbered.

For many of these assets, we can’t know how much longer the beating will last. But for silver, we know that the fall likely isn’t over yet.

You see, the metal recently fell for nine consecutive days. We haven’t seen a string of bad days like that since 2017… And despite a recent rally, history says this could lead to another 15% fall over the next year.

In sports, momentum can mark a major turning point in the game. Suddenly, one team strings together several great plays.

That turns things around… And it often sparks a surprise victory for the underdog.

Today, negative momentum in the silver market is accelerating. We can see it by looking at the metal’s recent string of consecutive down days.

You see, when an asset strings together several days in a row in either direction, it means momentum is picking up. And it tells us the current trend is starting to accelerate.

As we mentioned, silver recently fell nine days in a row, triggering a rare extreme. Check it out… 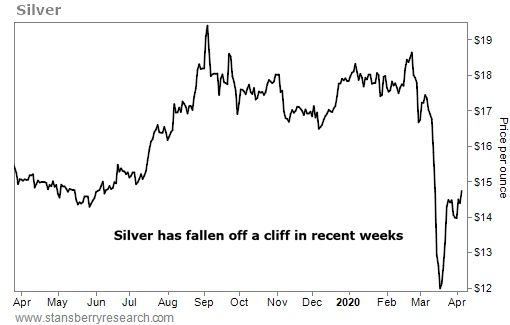 Silver crashed starting in mid-March. The metal was in freefall for more than a week. And it fell nine days without a single up day in between.

The metal has since recovered somewhat. But don’t expect this to be the start of a new uptrend.

Nine-day falls in silver are rare… So to see what this decline could mean going forward, we looked at every time silver fell seven days or more in a row.

These extremes point to major underperformance over the next year. We can see this in the table below…

Silver prices have climbed gradually over the past 45 years… returning roughly 2% a year. But the picture gets darker when you buy after a consecutive down-day extreme.

Similar cases have led to losses 71% of the time over the next year. And the typical six-month and one-year returns were -3% and -15%, respectively. Those are ugly returns – and they amount to dramatic underperformance.

Downside momentum has built up in the silver market. History says it could lead to further losses from here.

So while the recent crash is likely setting up a solid long-term opportunity in precious metals… in the short term, there could be more pain on the way for silver.