“You’ll never make that money back!” the pitchman breathlessly exclaimed.

The guy on the radio was selling annuities and warning investors not to put their money in the risky “Wall Street casino.”

He tried to scare listeners by telling them that if the market crashed like it did in 1987 or we had another nasty bear market like in 2000 or 2008 that “it would take a lifetime to make that money back.”

He couldn’t have been more wrong.

It was the biggest one-day drop in U.S. stock market history. 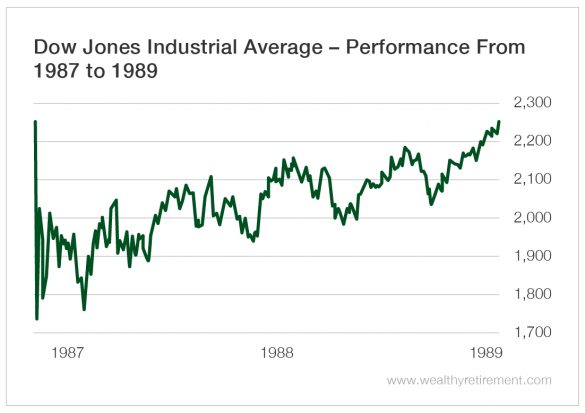 This one took longer to recover, but the index was back at October 2007 levels by April 2013. 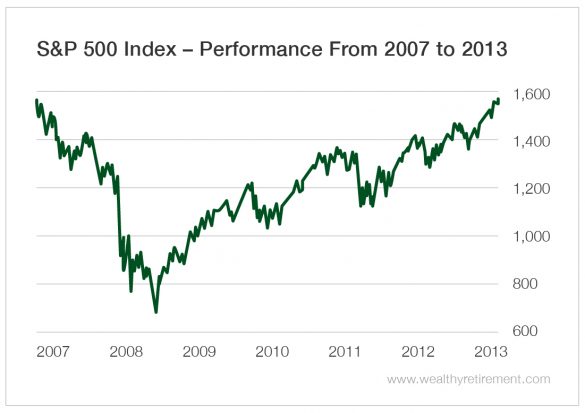 Five and a half years is a long time… but hardly a “lifetime.”

In fact, if you had such incredibly bad timing that you entered the market peak in 2007 but held on until today, you’d be up 89.2%, or just about 7% per year.

That’s just slightly below the market’s historical average of 8%. Not bad considering you’d have bought at the market top right before the worst collapse since the Great Depression.

My point is that the annuity salesman exaggerated the market’s risk to make annuities sound attractive.

It takes a lifetime to recover from a bear market or crash only if you sell into the panic.

When I wrote Get Rich With Dividends, I looked at the market’s 10-year rolling returns.

In other words, you had to sell during the worst economic and stock market downturns in history to lose money over 10 years.

And there were plenty of periods associated with those bear markets where you would have still made money.

For example, if you had been invested in the broad market from 1932 to 1941, you would have still made money, despite the Great Depression.

So the idea that you’ll never make back any money (that you may be down on paper) in the next market crash is nonsense.

1. Don’t Invest Money You Need in the Next Three Years

Keep funds needed to pay bills during the next three years in cash or in something ultra-safe, such as a money market account or certificate of deposit (CD).

You can also consider short-term Treasurys. That way, if the market falls, you know that you can still pay for your immediate needs.

If you’re receiving a solid yield, that will help alleviate some of the pain of a bear market.

Plus, if the company is continuing to raise its dividend, that’s a good sign its fundamentals are still solid. (The Oxford Income Letter portfolios are full of these kinds of stocks.)

3. Use a Sell Stop Strategy

Setting a stop loss when you enter a trade will ensure that you don’t make emotional decisions to sell when markets fall.

There are different kinds of stops (hard stops, trailing stops, etc.), and the one you use will depend on your exit strategy. You should never enter a position without a clear idea of how you will get out of it.

Using a stop strategy will ensure that if a bear market hits, you’ll get out with gains or minimal losses.

Bear markets happen. They’re not fun. But they’re not the end of the world either.

Understand that it doesn’t take your whole life to make back paper losses.

And if you take the above steps to minimize the damage of a bear market, you won’t get freaked out by a downturn or by an annuity salesman trying to scare you into his product.