The investments managed include equities and fixed income and the firm uses both fundamental and quantitative analysis. Federated is headquartered in Pittsburgh, Pennsylvania and was founded in 1955.

Federated has seen decent earnings and sales growth in the last three years, but both grew sharply in the most recent quarter.

Earnings were growing at a rate of 6% per year over the last three years while sales have grown at a rate of 3% over that same period.

In the most recent quarter earnings jumped by 63% and sales jumped by 26%.

Analysts expect the earnings to grow by 14% for 2019 as a whole while sales are expected to grow by 15%.

Federated’s management efficiency measurements are really strong with a return on equity of 27.2% and the profit margin is at 26.1%.

Despite the solid fundamentals, the sentiment toward the stock is rather bearish. There are 10 analysts following the stock at this time and only two rank the stock as a “buy”. There are seven “hold” ratings and one “sell” rating. The overall buy percentage is at 20% and that is tremendously low compared to all other stocks, let alone a company with the earnings and sales growth, and the management efficiency measurements of Federated.

The short interest ratio is well above average at 7.4 and the number of shares sold short actually declined in the second half of July. 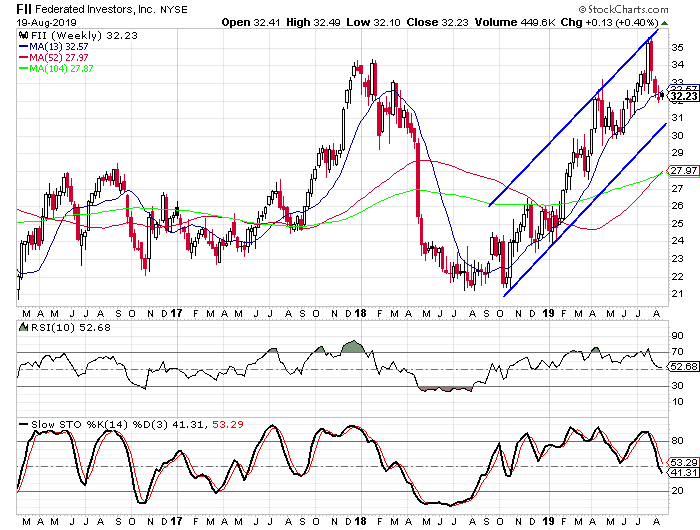 The weekly chart for Federated shows how stable the stock has been over the past year. It was trading between $21 and $23 last August and started rallying in October and would eventually reach $35 a share. While that isn’t as big of a return as we have seen from some big tech names in the past, this is an investment management firm and it experienced this gain while the overall market was essentially flat after several wild swings.

A trend channel has formed over the last year and the stock is down closer to the lower rail than it has been in a while. The overbought/oversold indicators are down near the levels they were at last October before the stock really took off.