Medpace Holdings (Nasdaq: MEDP) – provides clinical development services to biotech, pharmaceutical, and medical device companies. The company is headquartered in Cincinnati, Ohio and was founded in 1992.

They don’t develop drugs and devices, but rather they offer a suite of services to the developers that can support the products throughout the trial process, from Phase I to Phase IV.

Medpace has seen earnings grow at a rate of 36% per year over the last three years and they grew by 16% in the first quarter.

Sales have increased at a rate of 24% per year over the last three years and they were up 23% in the first quarter.

The company also boasts strong management efficiency measurements with a return on equity of 17.5% and a profit margin of 17.5%.

The sentiment is really interesting for Medpace as there are only three analysts following the stock.

All three have the stock rated as a “buy”, but the fact that a company with a $2 billion market cap and that trades 500K shares a day only has three analysts following it is surprising. Rather than having bearish sentiment from analysts, it is flying below their radar.

The short interest ratio on Medpace is currently at 4.4. The ratio has doubled since the end of February when it was only 2.2. 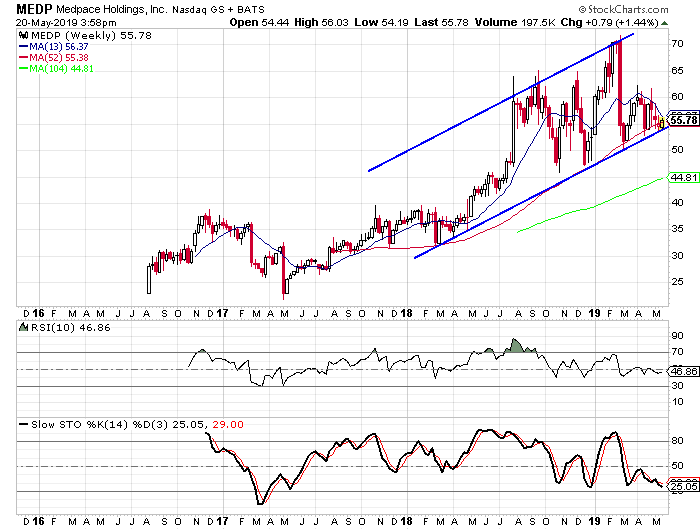 The weekly chart shows how the stock has been moving higher within a trend channel over the last year and a half. Like most healthcare stocks, Medpace has slipped in the last few months. The stock appears to be finding support at the lower rail of the channel and the 52-week moving average. I look for the stock to resume its upward trend in the coming months.

These “Left-for-Dead” Stocks Are Bouncing Back

The 10 Most Overvalued Stocks in the Dow

Upgrades and Downgrades for Wednesday, 8/4