History is full of investing disasters…

And another major blowup is happening in front of our eyes today.

A certain “boring” business is down more than 80% in less than a year. It’s managed to fall 50%-plus in a single day during that time – on two separate occasions.

Losses like that can be life-changing, in the worst kind of way. No investor wants to be caught in that type of fall.

But this situation does have a silver lining… It presents us with an incredibly clear teaching moment.

You see, one simple tool could have kept folks out of this major blowup. It’s easy to use, and you can implement it for yourself, starting today.

And it’s a near-guarantee – the best you’ll find – that you’ll never experience a catastrophic loss.

Today, we’ll look at what happened with this recent investment disaster. And you’ll learn the simplest way to prevent it from ever happening to you.

I’m guessing you’ve heard of the Internet company Stamps.com (STMP). But if you haven’t, it sells stamps…

At least, it did.

Back in February, the company announced that it was ending its exclusive deal with the United States Postal Service (“USPS”). That hurts when you have the word “stamps” in your name.

The company told investors it expected 2019 earnings to come in roughly 50% below original forecasts as a result. The stock fell more than 50% that day. But that was just the start…

Two weeks ago, the company announced another dismal round of earnings. This time, it said that the USPS is in another round of negotiations with STMP’s own reseller partners.

The company doesn’t know exactly what this will mean. But it again told investors to expect much lower revenue and profits in the coming years. The result? Another 50%-plus dive for the stock in a single day.

This has all been a blur of a few months for long-term investors. The company went public in June 1999. It led to nearly 17% annual gains from then through the 2018 peak. And the last few years were particularly amazing…

Starting in January 2017, it soared roughly 140% in just 18 months before hitting its peak. So it’s easy to understand the excitement around the stock… and why folks would want to hold on for the long-term.

That’s the problem, though. Getting married to an investment leads to bad decision-making.

In the case of STMP, what seemed like a sure bet became fundamentally uncertain. And around $4 billion in market cap has evaporated as a result.

You can avoid all this pain as an investor, though. One simple tool could have saved anyone who invested in STMP. And it could save you from your next investment disaster, too.

The tool I’m talking about is a trailing stop. A trailing stop is like a generic stop loss – but it’s even better.

That’s because the stop price rises as your investment rises. That ensures that you lock in gains. And this would have worked perfectly for STMP.

Let’s assume you bought the company in early 2018, when things were still good. And let’s say your exit strategy was a simple 25% trailing stop. That means you’d have sold once the stock fell 25% below its highest price.

Simply owning the company since early 2018 through its latest closing price would have meant a 75%-plus loss. But owning it with a 25% trailing stop would have led to a profit. Take a look… 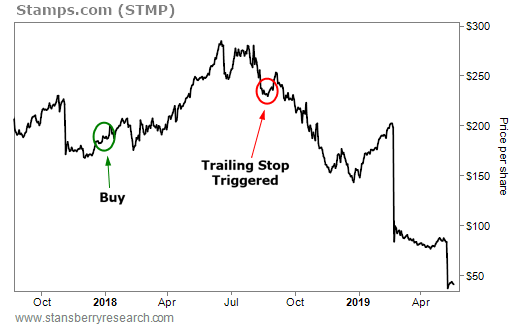 That’s why this tool works so well. It gives you an exit strategy that’s set in stone. And that takes the emotion out of investing. You never want to be stuck in a bad trade, thinking “one more day, and it’ll turn around.”

You could end up holding and hoping for months – or years – while the stock keeps falling.

Having an exit strategy means you have a defined sell point – no emotions involved. And that helps lock in gains and avoid catastrophic losses.

Simply put, you can’t afford to not have an exit strategy in place. And a trailing stop is a great place to start.

If you aren’t already using trailing stops, I urge you to start today. It’s the simplest way to avoid investment catastrophe.