The company was formerly know ad Clutch Holdings and was founded in 1915. Allison is headquartered in Indianapolis, Indiana.

The company has averaged average annual growth of 26% over the last three years and analysts expect 99% growth for this year.

In the most recent quarterly report, Allison reported earnings growth of 69% on a year over year basis.

Sales growth has been more modest, but has been growing nevertheless.

Annual sales growth has averaged 11% over the last three years and is expected to come in at 19.2% for 2018. Sales were up 16% in the most recent quarter.

The management efficiency measures and profitability measures are strong as well. The return on equity is at 39.4% and the return on assets is at 12.9%. The profit margin is 23.3% and the operating margin is at 33.6%.

Even with the earnings and sales growth and the strong fundamental measurements, Allison isn’t very popular with analysts and investors. There are 17 analysts following the stock and only seven rate the company as a “buy”. Of the other 10, eight rate the stock as a “hold” and two rate it as a “sell”. The short interest ratio is at 3.05 which is an average reading, but higher than a company with Allison’s fundamentals should be in my opinion. 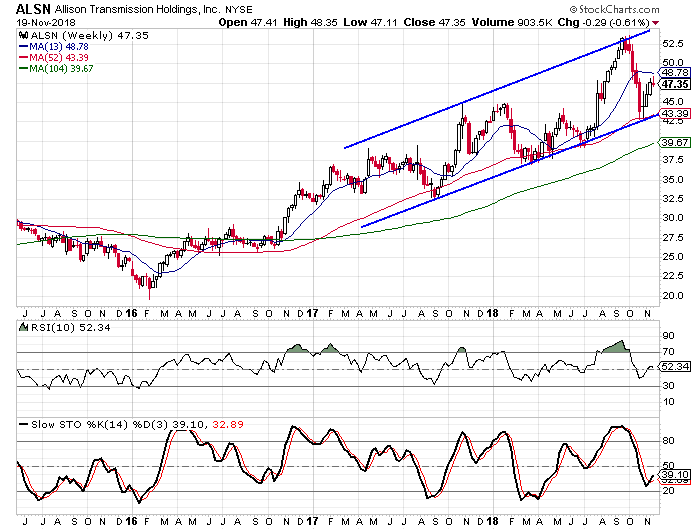 Looking at the chart for Allison we see that the stock has been trending higher since early 2016. Since mid-2016, a trend channel has formed that outlines the different waves of the trend. The stock just hit the lower rail of the channel a few weeks ago and has since bounced. The lower rail of the channel coincides with the 52-week moving average and the stock hasn’t been below that trendline very often in the last few years.

You can also see how the weekly stochastic readings had dipped to their lowest level since the spring. That was the last time the stock hit the lower rail of the channel and then it turned higher. The stochastic readings just made a bullish crossover last week and I view that as a positive sign.

Suggested strategy: Buy ALSN with a maximum entry price of $50. I would set a target of at least $70 over the next 12 months (for a potential return of almost 50% from current prices). I would also suggest a stop at $43.