Right now, it feels like darn near everyone is expecting the great bull market in stocks to end…

During October, stocks were down on 16 trading days – the second-highest number of losing days on record.

After so many down days lately, it’s no surprise investors are feeling fearful.

But market volatility like we’ve seen is actually pretty normal…

Last month, we said you can expect up to five corrections on the way to the top.

Today, let’s step back a bit from the near-term fears… And let’s look at the bigger picture.

Is a recession and stock market bust imminent? Based on history, the answer is no…

At least, that’s what our best bear market indicator is saying. It has flashed warnings before every recession over the last 40 years. And today, it’s signaling something investors aren’t expecting…

The end isn’t here… yet.

In fact, the end has been pushed out further into the future. Here’s why…

The bear market indicator I’m talking about is what’s known as the “Fed spread.”

Longtime DailyWealth readers know all about how this works. We’ve checked in on this indicator many times…

You see, typically, long-term rates are higher than short-term rates. That’s because investors demand to be paid more for locking their money away for a decade or longer – the longer duration means they are taking on more risk.

The intention of this is to “put the brakes” on the economy. And it works, all right. When short-term rates rise above long-term rates, the economy slows down, and – typically – heads into recession.

Back in July, we showed you it was getting close to the line again.

But here’s the thing: Getting close to the line isn’t the same as crossing it.

And now we’re seeing something history has shown us before…

In 1994, it looked like we were racing toward recession. We were quickly nearing a point where the yield on the two-year bond would be higher than the 10-year bond.

It was about the same setup as today. But just when it looked like rates were about to cross over, the situation changed. 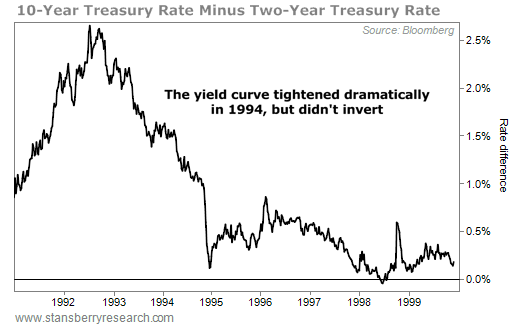 We’re seeing that same scenario today. After racing toward recession for months, the Fed spread changed direction. It is now widening, not narrowing. And we’re getting further from crossing the line that leads to recessions and bear markets.

Here’s where the spread has headed over the past few months: 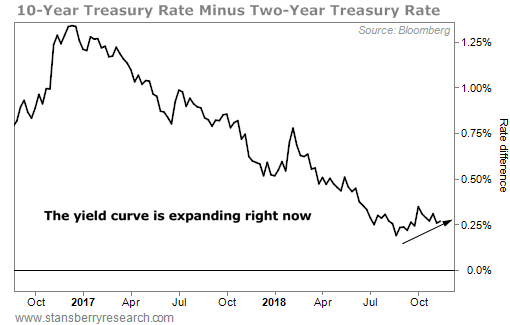 This is great news for us. History tells us that after short-term rates rise above long-term rates, we’ve got about 18 to 24 months left of gains in the market. But the clock hasn’t even started yet.

The stock market sure has been volatile lately. But the most powerful predictor of recession we’ve got says we’re not at the end.

Now is not the time to panic out of the market. Now is the time to stay invested and catch the potentially life-changing run-up ahead.