The death of retail. The retail apocalypse.

It has plenty of names. But they all come down to the same big idea…

You know this story if you’ve watched the news or read any headlines in the past two years. And it makes sense… Online shopping really does feel like it has revolutionized America.

But retail isn’t dead. Instead of an “apocalypse,” we see an opportunity… a cheap sector that has been left for dead. And right now, it’s flashing a clear sign of a turnaround.

Before retail giant Amazon (AMZN) conquered the Internet, online shopping was hit-or-miss. You’d place an order and wait… and wait.

Things have changed dramatically over the past 15 years. That’s thanks in large part to Amazon. It rewrote the rules.

It made two-day shipping the norm. Even one-day free shipping is common now… even to my home, on a little island off the coast of Florida.

Soon, no one will ever need to go to the store again, right?

That’s certainly how the media spins it…

The talking heads on the news shout about retail stores closing in 2017… roughly 8,000 according to UBS.

Most folks view this as proof of the “retail apocalypse” – a term that’s become popular in recent years.

Heck, Google searches for “retail apocalypse” have never been higher than in 2018.

The chart measures search volume for “retail apocalypse” in Google. A reading of 100 shows the peak of searches. Everything else is plotted relative to that extreme. Take a look… 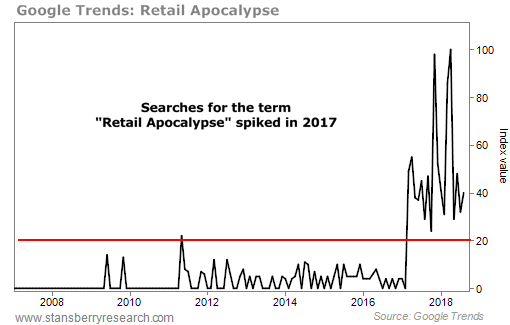 Before 2017, fewer people cared about this term. But it exploded in popularity last year. The interest continued into 2018.

I love to see this. It’s the kind of negative sentiment that I want to see before buying into an idea. And it’s a big reason why betting against the “death of retail” is a smart move today.

The public has this one wrong. Retail isn’t dying. The reality is that retail is always changing…

Decades ago, it was a shift from city shopping to suburban malls. In the 1990s and 2000s, the big-box stores came in and made life tough for local retailers. And now, e-commerce is forcing the next big change.

Retailers have always had to adapt to survive. It’s happening again right now. We can see it by looking at a chart of the largest retail exchange-traded fund – the SPDR S&P Retail Fund (XRT).

Despite the negative headlines, XRT has been climbing higher. Take a look… 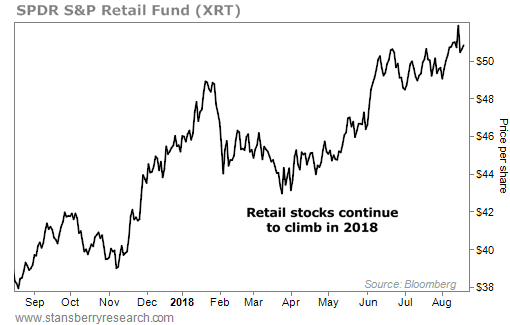 To me, it looks like a solid uptrend… which sets up an interesting opportunity.

The crowd has thrown in the towel. Investors have given up on the idea of traditional retailers. They’ve left these stocks for dead.

But things are turning around. Prices are moving higher. And I expect that will continue.

This is a rare setup. But despite how crazy it might sound, the smart move today is betting against the “death of retail.”

You can do it easily through shares of XRT. If you’re looking for a contrarian opportunity, this is a good as it gets.