Extra Space Storage (NYSE: EXR) is the second largest owner and/or operator of self-storage stores in the United States and is the largest self-storage management company in the country. At the end of June, the company owned and/or operated 1,568 stores in the United States and Puerto Rico. Extra Space is classified as a REIT and it is headquartered in Salt Lake City, Utah.

Extra Space’s profitability measurements are great with a return on equity of 20.9%, a profit margin of 46.9%, and an operating margin of 49.4%.

There is a ton of pessimism toward Extra Space.

There are over 10.9 million shares sold short and the stock’s average trading volume is just over 960,000.

This puts the short interest ratio at 10.86.

There are 16 analysts following the company with only four rating the stock a “buy”, 11 rating it a “hold” and one analyst rates it as a “sell”.

In addition to those two pessimistic indicators, the put/call ratio is an incredibly high 2.37.

Remember, we view sentiment indicators from a contrarian viewpoint and seeing extreme pessimism on a stock that has great fundamentals and is in an uptrend is precisely what we look for in a stock. 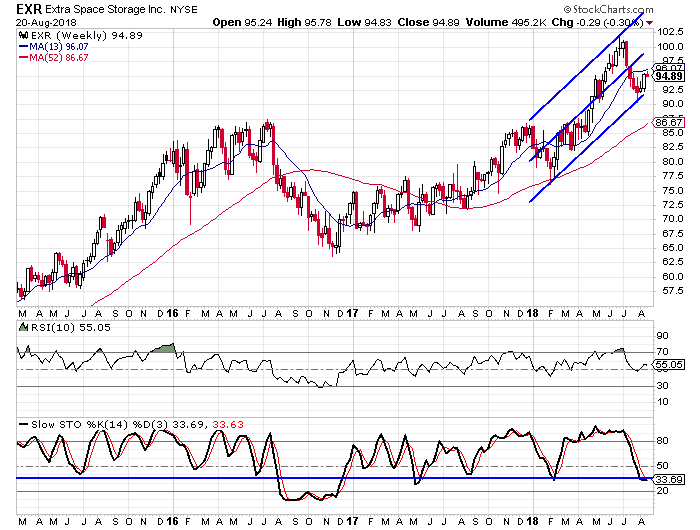 I used a regression channel for 2018 to show two things: First, the extreme angle of the current rally. Secondly, how the stock just hit the lower rail of the channel a few weeks ago and has now rallied the last two weeks. I also took note of how the stochastic readings are in the same area that they were in back February as well in May ’17. I look for the stock to continue the current upward trend.