When you’re on the outside looking in, things can appear very different from what they actually are.

For example, Hollywood seems so glamorous. But anyone who has ever been on a movie set knows how dull it can be.

There are hours of waiting between shots, and when cameras are rolling, it’s just take after take after take. Actors might even film the same scene a dozen or more times. In reality, Hollywood is not always what it seems.

Investing can be somewhat similar. New investors are often intimidated because of their lack of knowledge. They see well-dressed men and women in the financial media using jargon they don’t understand, so they believe that investing is a great mystery.

They think there are magic formulas to memorize, mystical ratios to learn and complex accounting rules to comprehend.

And they fear that there’s no way they could master the skills required to be a successful investor.

In reality, investors need to understand only two simple concepts to be successful, no matter their skill level.

1. The stock market goes up over the long term.

The financial media will breathlessly warn you about all of the terrible things that could happen to your money. And though markets do fall – and sometimes sharply – they also rebound and come back. They always have.

Even after the Great Recession, the worst economic collapse in the United States since the Great Depression, the S&P 500 was back at the 2007 highs within 5 1/2 years.

If you’re invested in the broad market (like in an S&P 500 index fund) and leave it alone, over the years you should earn nearly 10% per year on your money.

2. The power of compounding is real.

Albert Einstein allegedly once said that compound interest was the greatest force in the universe. While there’s no proof he actually said that, compound interest is at least the most powerful force for growing your wealth – especially if you own dividend growth stocks.

Here’s how: Let’s say you buy $2,000 worth of stock at $50 per share and the yield on the stock is 4%. Additionally, we’ll assume the dividend increases 8% per year and the stock rises in line with the historical market average. 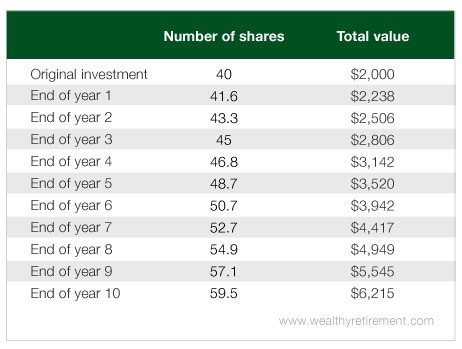 Had there been no dividend to reinvest and you benefited only from the price appreciation of the stock, your $2,000 investment would still be worth a respectable $3,882. But that’s $2,300 less than the amount you’d have if you had reinvested those dividends.

Reinvesting your dividends is easy. When you buy a stock, just instruct your broker to reinvest your dividends. If you use an online broker, there’s usually a box to check that says “reinvest my dividends.”

Best of all, it’s free. So you pay a commission once when you buy the stock and then pay nothing again (until you sell), even if you reinvest the dividends for years. The broker keeps track of your growing number of shares and dividends. There’s nothing for you to do except watch the investment swell in value.

Don’t be intimidated by what you think you don’t know.

If you have a long-term time horizon, investing doesn’t have to be complicated. In fact, it couldn’t be easier.

Have you spotted the "5G" signal on your phone yet? [sponsor]
I've seen it pop up a few times in my travels. That tips me off that this technology is getting closer and closer to going nationwide. Once it does, it could transform how we do everything. That's why I immediately set out to find the number one 5G stock... And I believe I found it. Click here to see my #1 5G stock and to discover how 5G will affect you and your financial future.