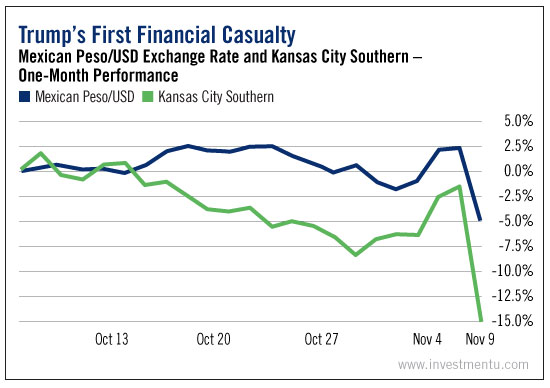 We tried to tell you…

Back in September, we predicted that a Trump victory would ravage Mexican markets and transborder stocks. We noted, specifically, that a prominent Mexican-American railroad would likely tank on the news.

[ad#Google Adsense 336×280-IA]And more recently, we explained how the Mexican peso would suffer a similar fate.

As you can see in the chart above, we were proven right on both counts.

If you had read our analysis and shorted these investments, you’d be sitting pretty indeed.

On Wednesday, the peso and Kansas City Southern (NYSE: KSU) plunged into freefall after it was announced that Donald Trump will officially become our next president.

Let’s take a closer look at what happened… and how investors should prepare their portfolios for a Trump presidency.

Kansas City Southern Railway
As we explained in our original article on the subject, Kansas City Southern’s railway component is a textbook example of NAFTA infrastructure. It makes more than half of its revenue moving freight across the Mexican-American border.

A sizeable share of that freight consists of new cars and car parts. And that’s exactly the intent behind NAFTA. Cars, machinery and other goods are manufactured cheaply in industrial areas of Mexico. Then they’re sold in the lucrative American consumer markets.

But after Trump’s victory, this kind of trade may be in its final days.

Since the beginning of his campaign, Trump has lambasted NAFTA as a bad trade deal that “has destroyed our country.” He has pledged to overhaul or flat-out end the agreement.

And if NAFTA goes, most of Kansas City Southern’s money will go with it. The company’s prospects will look pretty bleak if it loses easy access to Mexican markets.

It’s possible that traders will even put it out of business before Trump does. The stock is already down 10.63% from its pre-election high.

The Mexican Peso
In the wake of Trump’s victory, the entire Mexican economy is on shaky ground.

Like many developing countries, Mexico is highly dependent on exports. And more than 80% of those exports go to our country.

In other words, about 14% of Mexico’s GDP consists of things it sells to Americans.

If Trump succeeds in reneging NAFTA and building a wall at Mexico’s expense, then its economy could shrink by double digits in the next few years. It’s no wonder investors are pulling their money out of the country’s currency.

Since the election, the peso has fallen to historic lows against the U.S. dollar (which is also sliding in value). It’s down 10.13% as of this writing.

It doesn’t matter if you supported Clinton or Trump. As an investor, you need to position yourself for success over the coming years. To do that, you need to minimize your exposure to Mexican markets and Mexican-American companies.