It was easy to miss during this most recent election, but there were some “real” policy issues discussed from time to time.

One of them was the deteriorating state of America’s infrastructure. It’s a pressing problem, huge in scope, and there’s just no cheap or easy solution.

[ad#Google Adsense 336×280-IA]That’s good news for investors who get in on this play right now, because this can’t really be “kicked down the road” any further.

In fact, the problem (and the opportunity) is right outside my door today.

And if it’s not outside yours, chances are it’s close.

Let me show you a few pictures to prove my point and spotlight this investment.

Check Out the Huge Mess Right Outside My Door 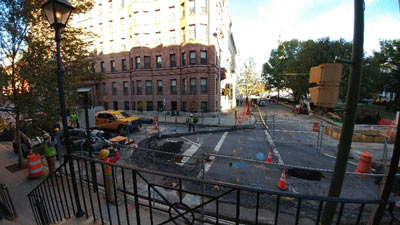 Legendary investor and mutual fund manager Peter Lynch used to counsel folks that the best investment opportunities are found just by looking around – by keeping your eyes and ears open.

Here in Baltimore, I can literally walk out my office door and see (and, with the jackhammers, hear) how dire America’s infrastructure “predicament” has become.

The sidewalk that runs in front of our building is being used as storage for lengths of “composite” culvert.

A block to the south, Cathedral Street is closed to traffic as work crews replace water-and-sewer system sections that failed (after an expensive and smelly cleaning) and created a massive sinkhole at a nearby intersection

According to a recent report in the local City Paper, Baltimore has been under a legally binding “consent decree” with the U.S. Environmental Protection Agency (EPA) since 2002 – thanks to sewage and water-contamination problems that violated the U.S. Clean Water Act.

Those problems were supposed to have been fixed by the start of this year.

The EPA and the city of Baltimore entered into the consent decree after the city was found to violate the Clean Water Act by “discharging untreated sewage from its sewage collection system to the Back River, Patapsco River, and the Chesapeake Bay and several smaller water bodies and other waters of the United States.” According to that agreement, signed by then-Mayor Martin O’Malley, the city would eliminate all of the sewage spills and overflows by the beginning of this year.

But as City Paper writer Baynard Woods wrote, the city “blew through the deadline with somewhere around half of the work done.”

The overall upgrade of the sewage system has already cost $700 million. Even so, more than 42 million gallons of raw sewage flowed into local rivers and the Baltimore Inner Harbor last year.

I’m not picking on Baltimore City – a place I love. The fact is that America’s water and waste-management systems are a disaster. And so are the country’s roads and bridges.

Nor is this “infrastructure predicament” limited to the United States.

Worldwide, there’s a need for $57 trillion worth of infrastructure spending over the next 15 years, the McKinsey Global Institute said in a research report issued in June 2015.

As the consultancy acknowledged: “That’s an enormous sum.”

So when Trump embraced this as a campaign issue back in August 2015 – telling an interviewer that “I want to rebuild our infrastructure” before we send astronauts to Mars – he elevated the long-simmering issue to platform status.

During the campaign, both major party candidates put forth infrastructure plans, which elevated the infrastructure debate to a degree not seen in decades.

Spending is almost certain to escalate now, and that’s key to the opportunity I want to share with you.

This Is a Good Plan… but There’s a Catch

Trump is proposing to spend $1 trillion in a plan crafted by economic advisers Wilbur Ross and Peter Navarro.

According to the plan, that trillion-dollar outlay is to take place over 10 years. The strategy leans heavily on private funding, which would lower the borrowing burden on the states and cities overseeing the makeover projects. By using government tax credits – a device that would boost the return on investment reaped by private-sector investors – more nonpublic money would be drawn into infrastructure projects.

“If there’s ever a great time to do it, it’s got to be now,” Ross, a respected private-equity player, told a Yahoo! Finance journalist. “With interest rates so low, this has got to be the best time from a break-even point of view, from a societal point of view.”

Now, here’s the rub: That tax credit would only work with projects that have an attached revenue source – like toll roads, utilities, airports, or other projects that collect “user fees.”

Other projects might be financed by giving private investors a “piece of the action” in the form of equity stakes. Either of these options – the equity stakes or higher user fees (a form of cash flow that funnels back to private-sector investors) – could be seen as a kind of privatization of the country’s infrastructure, the Yahoo! Finance report said.

This trend means everything to infrastructure investing.

Government Has to Get Creative with Funding

Here’s a reality that U.S. taxpayers need to accept: The usual way of “doing business” when it comes to America’s roads, bridges, and drinking-water and waste-management systems just doesn’t work.

Just in the United States, we need to spend $3.6 trillion on infrastructure projects by 2020, says the American Society of Civil Engineers. But federal, state, and local governments together spend less than $420 billion a year. That works out to a shortfall of about $1.9 trillion during that four-year stretch, says writer/analyst Rick Newman.

As we told you last year, this “infrastructure deficit” has created a true urgency in which governments are increasingly connecting with private-sector investors to finance these projects. That’s making it possible for more of them to be built. And it’s also creating a whole new venue of “alternative investments” for folks like you and me who are seeking new and lucrative places to put our investable cash.

Thanks to super-low interest rates, near-record stock prices, and a brutal sell-off in traditional alternatives like commodities, investors are looking for “other” profit opportunities.

And infrastructure is a sound one.

As the privatization movement evolves, there will be new “vehicles” for you to profit – new funds, special new bonds and derivatives, new types of partnerships, and even “tranches” (pieces) of an investment that get broken into component pieces.

To get started, however, let’s look at a very direct, but very unusual, infrastructure play. My readers are getting the chance to profit from this and some other infrastructure recommendations, but this is one of the most “famous.”

It’s easy to understand… and undervalued for long-term wealth seekers.

This Stock Could Give Profits for Years

[ad#Google Adsense 336×280-IA]As I’ve written before, GE is well along on a corporate makeover spawned by the global financial crisis of 2008-09.

Its strengths in aircraft engines and locomotives make it a “direct” play – on transportation infrastructure.

Obviously, rail freight is going to continue to accelerate over the coming decades, and GE locomotives will haul the load.

And then there’s the buildout of airports and the purchase of aircraft to handle surging demand.

But the real potential is because of GE’s transition to a “digital industrial” company, meaning it’s a direct play on the Internet of Everything (IoE) – a global network of interconnected devices that we’re just beginning to scratch the surface of.

In other words, because of the company’s Predix software and focus on the connected world, GE is a play on “digital infrastructure” – the infrastructure of the future.

Long term, this company will find plenty of demand for its offerings.

And that will make it an infrastructure wealth-builder for you.