The Japanese yen is staging a major breakout…

The currency has been crashing for five years… But it recently climbed 7% in just two weeks. History says that kind of return tends to lead to further gains.

And based on the last 30 years, a new uptrend and a major breakout both point to 8% gains over the next year.

From January 29 to February 12, the yen climbed 7% against the dollar. That’s the largest two-week climb since 1998.

And this comes after years of a crashing yen.

Japan’s currency is down 35% versus the dollar since its peak in 2011. A falling currency was one of Prime Minister Shinzo Abe’s goals when he won office in 2012…

You see, Abe won election by promising to weaken Japan’s currency and improve its economy. The economic improvements are still up for debate. But thanks to money printing and lower interest rates, Abe has managed to kill Japan’s currency. Take a look… 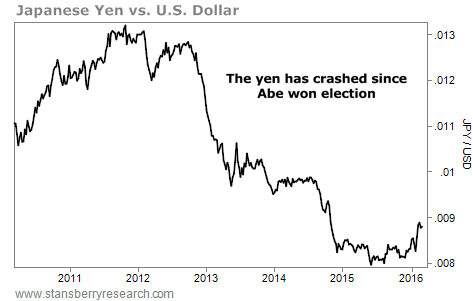 Japan also moved to negative interest rates in January. This should have created further downward pressure on the yen… but instead, the currency is breaking out. The recent move higher put the yen at its highest value since 2014.

Importantly, a 7% rise in just two weeks is rare. This has happened less than 1% of the time over the past 30 years. But when it happens, the yen tends to outperform going forward.

The table below shows the full details. Take a look…

What’s more, the yen is now trending higher for the first time in five years. As of the end of February, the yen was up over the prior 12 months. That’s the first time we’ve seen this since 2012.

Over the last 30 years, buying the yen after a 12-month increase has been a good idea. We can expect 8% gains over the next year, based on history.

To take advantage, consider shares of the CurrencyShares Japanese Yen Fund (FXY). This is a simple fund that tracks the Japanese yen versus the U.S. dollar. And it’s the easiest way to profit from this idea.

Right now, we have a long-term uptrend back in place and a major short-term breakout for the Japanese yen.

Both of these point to 8% gains in the yen over the next year. And that makes FXY an investment worth considering today.