Deals this good are extremely rare…

And the world’s best investors know it.

Of the two dozen gurus whose portfolios I recently examined, 11 of them were holding shares.

As I explained last week, elite investors who manage at least $100 million are required to file forms (called “13Fs”) with the U.S. Securities and Exchange Commission (SEC) every three months.

These elite money managers have decades of experience, huge research budgets, the best contacts, and long track records of success.

So reading these reports is a way to get millions of dollars’ worth of research for free.

As I combed through the most recent batch of 13Fs a couple of weeks ago, a familiar stock turned up again and again: $560 billion consumer-electronics giant Apple (AAPL).

Take Icahn, for example. He’s among the richest people in the world… And he has gotten there through brilliant deal-making and by spotting great values. He has 16% of his $29 billion portfolio in Apple today. It’s his largest position.

And then there’s Einhorn. He is sometimes called a “future Warren Buffett.” From his fund’s inception in 1996 through 2013, Einhorn delivered annual returns of 19.5%. Right now, he has 12% of his $5 billion portfolio in Apple.

Tepper is a great big-picture thinker and a master of buying distressed debt. His hedge fund, Appaloosa Management, averaged 33% annual returns from its founding in 1993 through 2014. Tepper has 3% of his $5 billion fund in Apple.

Apple is the most profitable business ever. Over the last 12 months, Apple generated $234 billion in sales and had a huge, 23% profit margin. Its profits came in at $53.5 billion. That’s more than Alphabet (aka Google), Wal-Mart, Microsoft, and Intel combined.

The chart below shows Apple’s share price (top) along with the two valuation ratios (bottom). Right now, Apple trades with an EV/EBITDA ratio of 5 and an EV/FCF ratio of 6.5. Since the iPod was released in 2001, Apple has been this cheap only three other times… 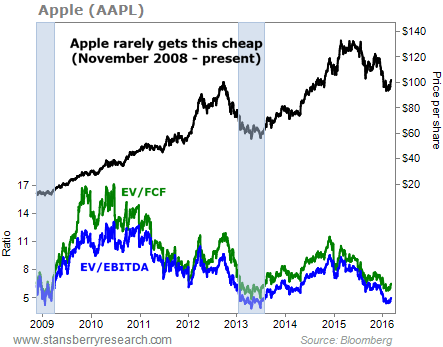 The Apple naysayers have two main concerns. One is growth. Such a big company can’t possibly grow as fast as Apple has been growing (sales have more than doubled in four years) for much longer. The other is that the iPhone represents 66% of Apple’s sales. This concentration on just one product makes the company more susceptible to competition.

The naysayers are right. Both of these problems are likely to hurt Apple’s future results. The thing is, investors are valuing Apple today as if the worst has already happened… But the last 12 months were the best in Apple’s history.

In other words, there’s a huge disconnect between Apple’s business results and its share price due to the expected crisis for iPhone sales. There’s a good chance Apple will perform better than expected. But even if it doesn’t, the downside from here is low. Apple is trading at crisis levels.

If you own Apple already, hold on to your shares. If you don’t, buy shares today and use a 25% trailing stop. Some good news or a change in sentiment could send shares back up to their old highs and beyond.