There was once a time – many, many years ago – when the primary reason to buy and own a stock was for the dividend it paid.

A dividend is a shareholder’s rightful share of the underlying profit a company generates. And it’s a great source of passive income.

While the stock market has evolved into something much broader, there are a lot of investors out there (me included) who won’t buy a stock unless it pays a dividend.

In fact, there’s a subset of investors who take it a little bit further.

[ad#Google Adsense 336×280-IA]How are these dividends regularly and reliably growing?

In general, the businesses that can achieve such feats are only able to do so because their profits are also regularly and reliably growing.

You can find more than 700 examples of US-listed dividend growth stocks by checking out David Fish’s Dividend Champions, Contenders, and Challengers list.

But I don’t just write about these stocks. I also personally invest in them.

In fact, I’m betting my early retirement on a broadly diversified portfolio of high-quality dividend growth stocks – I believe the growing dividend income this portfolio generates will cover my expenses by the time I’m 40 years old (I’m 33 now).

While I regularly espouse the benefits of this strategy, it’s not something that someone should follow blindly.

A somewhat subjective term, I like to think of companies that are responsibly managed, have great fundamentals, and have strong competitive advantages.

Perhaps just as important, though, one wants to buy these stocks when they’re undervalued.

All else equal, a cheaper dividend growth stock will come attached with a lower yield.

That would automatically increase your yield to 4% right off the bat.

So more income right away. And also more potential aggregate income for the life of the investment.

Not only do you benefit from more current income but any dividend increases the company announces in the future will be based off of that higher yield.

You’re not only compounding more income from the higher initial yield but also potentially compounding a higher rate of increasing income all the way along.

But that same fixed amount of money can buy 40 shares when it’s 16% undervalued.

This obviously could potentially also lead to a higher total return over the long run.

You get the higher yield (one component of total return) and any upside that could manifest itself if/when the stock is later repriced closer to its fair value (capital gain, the other component).

And there is also less risk involved.

You’re risking less potential downside by introducing that margin of safety when buying an asset below what it’s worth. That offers some protection for your capital.

Or you’re risking less overall capital by buying the same number of shares at a lower price point.

Either way, you’re better off than you would otherwise be if you were to pay fair price or more.

While the benefits are clear, how does one go about finding undervalued stocks?

Well, it’s simply a case where you have to, over time, become somewhat proficient at valuing stocks.

The good news is that there are numerous tools out there designed to help facilitate this.

One such tool is a valuation lesson put together by fellow contributor Dave Van Knapp. It’s an excellent (and free) resource available right here on the site.

Once you’re able to effectively use a system like the one just mentioned, you should have a reasonably good idea of what a business and its stock is worth.

At that point, it’s simply up to you to be disciplined and seek out a price as far below that value as possible.

After all, price is only what you’re paying. But value is what something is actually worth.

With all of that in mind, I believe we have a high-profile and high-quality dividend growth stock that is available for a price below what it’s worth.

Want to know which stock that is?

Walt Disney Co. (DIS), together with its subsidiaries, operates as a global diversified media and entertainment conglomerate.

Who hasn’t heard of Disney?

You almost can’t avoid the company and its diverse set of offerings.

They have major theme parks around the world. Cruise lines. The ABC television network. ESPN. And a film studio that pumps out blockbuster after blockbuster.

From Star Wars to Disneyland to Frozen to Mickey Mouse, their media and entertainment products are practically ubiquitous.

What’s really fantastic for an investor like me, though, is that Disney takes its shareholders seriously.

They not only share profit with shareholders in the form of a dividend but they’ve also been steadily building up a track record for increasing that divided.

The company has increased its dividend for the last six consecutive years.

Might seem a bit short for a company with history dating back to 1936, but this company is very different (and much larger) than the one founded by Walt Disney back then.

Disney actually has a solid dividend track record dating back decades; however, they kept the dividend static for a few years through the financial crisis and ensuing Great Recession.

But they’re making up for that in a big way: the five-year dividend growth rate stands at a monstrous 31%.

And with a payout ratio of 26.5%, there’s still plenty of room for continued aggressive dividend growth for the foreseeable future.

The stock’s low yield is a drawback for some, though.

But this has never been a high-yield stock.

The company has long preferred to keep a low payout ratio, which allows for a large amount of retained earnings to reinvest back into the business.

They’ve done a great job with that reinvestment over the last decade. Aquisitions like Marvel Entertainment, Pixar, and Lucasfilm have positively and massively transformed the company’s Studio Entertainment segment.

So the yield’s a bit low, but I think the company will have the wherewithal to hand out dividend increases for decades to come.

Let’s next take a look at Disney’s top-line and bottom-line growth over the last ten fiscal years. With a low payout ratio on the back of really high dividend growth, we could surmise that growth has been impressive.

But we’ll see exactly what that looks like before looking into projections for the near future, which will help us value the business and its stock.

Not too shabby for a fairly mature company. What they might lack in explosive growth, however, they make up for in consistency: revenue growth was almost completely secular over this period, even when factoring in the Great Recession.

Although Disney is diverse, they’re not completely immune from macroeconomic headwinds. The cost of their parks, for example, means less people are likely to visit when the economy is doing poorly.

Meanwhile, profit growth was far more impressive due to regular share repurchases and a marked improvement in profitability across the board.

The outstanding share count is down by more than 17% over this time frame, which is really solid considering that shares were issued for some of their aforementioned acquisitions.

Looking forward, S&P Capital IQ is predicting that Disney will compound its EPS at an annual rate of 11% over the next three years.

I think that’s a perfectly reasonable expectation when looking at how the recent headline acquisition of Lucasfilm is really just starting to be integrated within the larger Disney universe. And the company has yet to open its massive Shanghai Disney Resort.

The balance sheet is another area where Disney shines.

With a long-term debt/equity ratio of 0.29 and interest coverage ratio just below 60, the company is very, very lightly leveraged.

This is just a stellar balance sheet, especially considering how capital-intensive building parks is.

Their profitability metrics are also fantastic.

It’s tough to compare Disney directly because there is no company out there like it, but both numbers are great in both absolute and relative terms. Better yet, both have improved substantially over what they were a decade ago. And ROE has to be looked at through the lens of low leverage.

But you’ve got excellent fundamentals here across the board. And near-term catalysts like the giant new park in China and new films coming out of their Marvel Entertainment and Lucasfilm acquisitions should continue to allow the company to soar to new heights.

I find it highly likely the company continues to grow its dividend rather aggressively for years to come. The payout ratio is low and the growth rate is high, setting the stage for excellent income growth.

Of course, there are risks like the company’s reliance on ESPN to consider. That said, there seems to be a lot of negative sentiment out there in regards to that area of the business, but keep in mind that the Media Networks business segment (which houses ESPN as the crown jewel) saw its revenues up 10% year-over-year for the most recent fiscal year. No doom and gloom here.

With all of this in mind, we might expect to pay some massive premium for shares.

But it actually appears that the stock is undervalued…

The P/E ratio sits at 17.79 right now. That’s below both the broader market and the stock’s own five-year average P/E ratio of 19.3. While this stock might deserve a premium to the market, it’s actually available for a good discount.

How much of a discount is present? How undervalued is the stock?

My opinion is that we have a really high-quality dividend growth stock available for a price well below its intrinsic value. Is my opinion way out of line?

So I came in high there, which is why I like to average these valuations out. It tends to smooth out the numbers, resulting in a blended number that takes multiple perspectives into account. That averaged valuation is $126.51, which would indicate the stock is 33% undervalued right now. 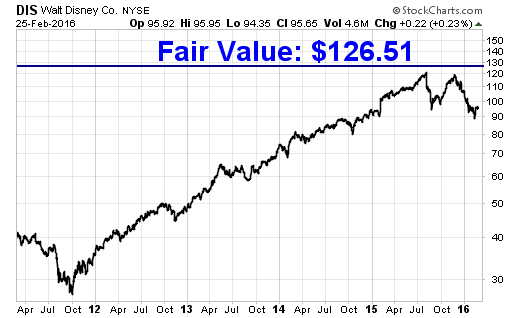 Bottom line: Walt Disney Co. (DIS) is a high-quality entertainment and media company with wonderful products that are essentially ubiquitous. Their global presence continues to grow and the business is broadly diversified. Financial results continue to break records for the company, yet the stock still appears to offer the potential for 33% upside. I think this is one of the best long-term opportunities available on the market right now.