“Boldness be my friend.” – William Shakespeare

These past six years have been very tough for savers. The Federal Reserve has quintupled its balance sheet to over $4 trillion in an effort to keep interest rates abnormally low in a belief this would help the economy recover from the financial crisis.

This zero interest rate policy or ZIRP that was also known as quantitative easing ended in October of 2014.

[ad#Google Adsense 336×280-IA]The central bank even managed to raise interest rates for the first time since 2006 in mid-December.

The stock markets of the world have not behaved well since that move in what is more than an understatement at the moment.

One impact ZIRP had was to reduce the yield savers and deposit holders were able to receive on their funds.

Many stretched into riskier asset classes in the search for any kind of yield.

This was one goal of quantitative easing, and one reason stocks, real estate, and other asset classes had such a big run from 2009 through 2014.

Unfortunately it, like most government policies, had unintended and disastrous impacts as well.

Many retirees who had previously only held Utility and “Widow and Orphan” stocks primarily for the dividend yield ventured out on the risk curve into asset classes they had never invested in before.

In some cases, like in the high yield upstream master limited partner space, that investor who was seeking both “safety” and yield has been crushed.

If there is a light at the end of the tunnel, it is there are many high yielders that have become extremely attractive thanks to the bear markets ripping across most sectors including biotech, pharma, and REITs. Here are a few that I think have a great combination of value, growth, and income right now, and have terrific long-term entry points. 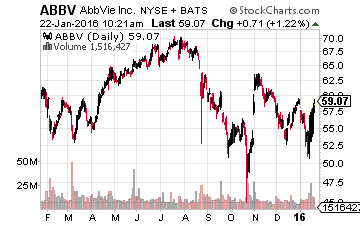 In the biotech space, it is hard to beat the long term value that AbbVie (NASDAQ: ABBV) is providing investors at the moment.

The company recently laid out a credible five-year plan to increase revenues at a 10% clip annually while improving margins from the current 36% level to 50% over that time span.

Not that the company is underperforming or not delivering results currently. Profits are tracking to better than a 30% year-over-year gain in FY2015.

The current consensus has earnings posting another 15% to 20% increase in FY2016. Both Morgan Stanley and BMO Capital also reiterated their Buy ratings on the stock earlier this month. The shares are very cheap at under 11 times forward earnings and carry a yield north of four percent. 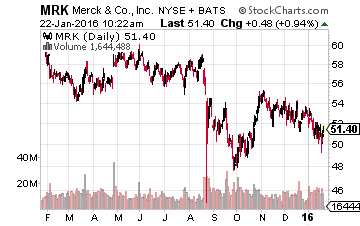 Moving onto the pharma space, Merck (NYSE: MRK) also looks appealing at current levels. The company has spent the past five years rebuilding its pipeline and dealing with patent expirations. As a result, revenues have declined each year over that transition.

The shares are not expensive at approximately 13.5 times forward earnings and they yield a bit over 3.5%.

One of the more interesting things about the market in 2016 is that real estate investment trusts have plunged despite yields on the ten-year treasury shrinking back to the two percent level.

Usually, when treasury rates go down REITs do very well. However, the turmoil in the high-yield credit markets that has been triggered by fears that a lot of small and mid-tier energy and commodity producers are on their way to bankruptcy has spilt over into other companies that also used debt to finance their business models. 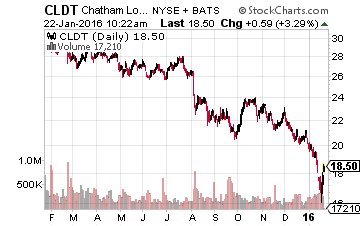 This has left a lot of well-managed plays yielding 50% or more than they did in the summer. I particularly like lodging REIT Chatham Lodging Trust (NYSE: CLDT).

The company has a very seasoned management team and this is not their first rodeo. In addition, most of the hotel properties are not significantly impacted by the fall in international tourism thanks to the strong dollar.

A Courtyard in Altoona, Pennsylvania or Addison, Texas does not really depend on whether Herr Schulz and family is coming to America this year or not.

More importantly, the company has done a stellar job over the years growing FFO (Funds From Operations) via renovating properties and making strategic acquisitions. The company recently announced a special monthly dividend of 10 cents a share as well as secured an upgraded revolving credit facility on favorable terms.

FFO is tracking to an approximate 20% year-over-year increase in FY2015 and the consensus has another gain in mid-teens projected for FY2016. The stock yields north of 6.5% thanks to the recent downturn in the sector. Chatham also pays dividends monthly. The shares are dirt cheap at around 6.5 times forward FFO.

The turmoil in the markets so far in 2016 is not fun for anyone to navigate. However, as my late father always said, “This too shall pass.” While waiting for the markets to bottom, picking up some high-yielders at solid valuations seems the way to go at the moment.

See Bret Jensen’s Top 3 Prime Breakout Stocks for 2016 [sponsored ad] Small Cap Gems analyst Bret Jensen has identified his top 3 takeover stocks for 2016. With a knack for finding companies on the verge of buyouts – and massive returns for regular investors – Bret’s just released a new report on 3 prime takeover candidates with potential returns of 76%, 100%, even 183%. With the market taking a pause now just may be the time to pick up a few shares. Click here for details on these stocks.