Well, to say 2015 and early 2016 have been challenging markets is a bit of an understatement. And certain segments of the corporate bond market have really taken it on the chin.

Take a look at the chart on your screen now. 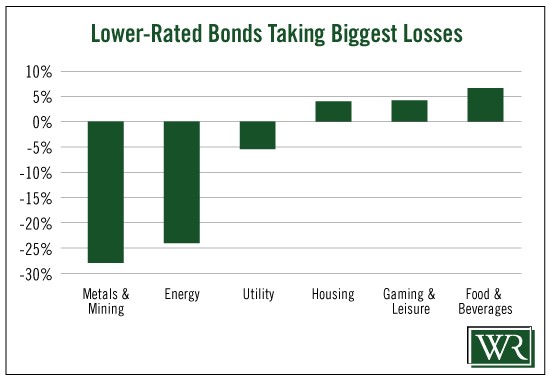 And the chart below shows that most of the downside was in the lower-rated bonds: the B and CCC levels are down 9% to 15% in some cases. (And the numbers are actually higher for the bonds with that rating in the energy and mining sectors). 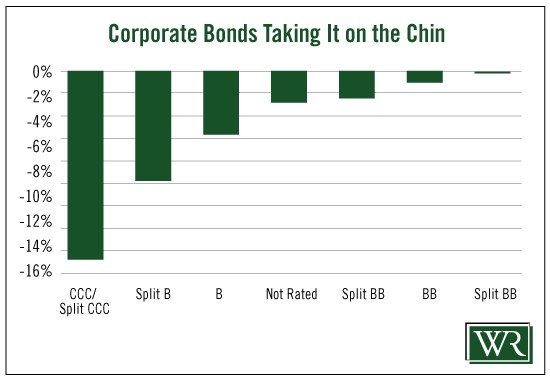 How many of you would be happy today being off less than 1%?

But, as always, the media and money press were quick to jump on “the world is ending” bandwagon and caused a huge sell-off in bond funds through most of the last quarter of 2015: $27 billion came out of high-yield or junk bond funds.

But here’s what they didn’t tell you and won’t (because good news doesn’t sell):

According to Credit Suisse, junk bonds have lost money in only five of the last 28 years. That’s 23 years of winners!

But better than those numbers, the chart you see now lists the one- and three-year performance of junk bonds following four of those losing years. 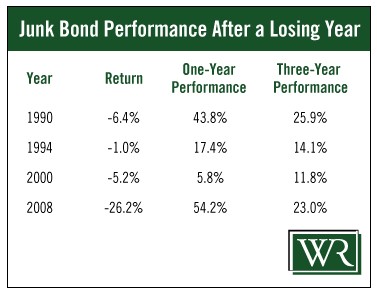 See a pattern emerging? Up every year after a down market – and as high as 54% one year, following 2008. And the three-year returns after bad years are just as impressive: up 11% to 25%.

Are corporate bonds way down right now, especially in oil- and mining-related companies? You bet!

Does that mean all of the companies in those industries will default? Of course not! The vast majority will survive easily.

And it doesn’t require a brain surgeon to pick the ones that will make it to maturity.

And they are returning sky-high annual yields and income levels we haven’t seen in decades.

Right now, 10% to 15% annual returns and double-digit income are not unusual.

This is one of the best income-buying opportunities in corporate bonds in decades, maybe since the crazy interest rate debacle of the ‘80s. But we don’t have inflation problems now that we had back then. So, this is real money – not the inflated numbers we saw back then.

And, just as when the stock market sells off, most of you will miss this opportunity to buy at multidecade lows.

So this time, ignore your gut that is telling you to hunker down. I guarantee you it is wrong 90% of the time.

Do your research. Look for the ones that got thrown out with the bathwater.

Believe me, there are plenty of them out there.