The losses have continued… As I write this, stocks are down more than 7% for the year.

[ad#Google Adsense 336×280-IA]These losses have made investors incredibly worried… They worry that this terrible start could be a bad sign for the rest of the year.

But history shows that you shouldn’t worry. Going back to 1953, stocks have bounced back for the year after a bad first month more than 60% of the time.

Since 1950, the first five trading days of the year have been negative on 24 other occasions. Stocks ended the year with positive gains more than half the time.

And overall, stocks produced positive gains for the year on average. Take a look… 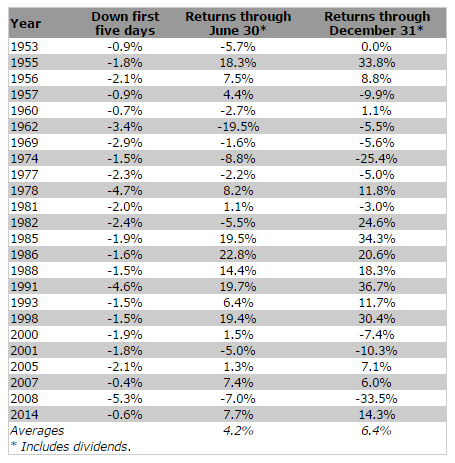 To be clear, stocks certainly can end 2016 with losses. Negative beginnings to years have led to plenty of losing years, as the table above shows. The most recent of which was a 34% loss in 2008. But history says this is the exception, not the rule.

These years ended with gains the majority of the time. And on average, we saw gains of around 6%.

So 2016 is off to a rough start. You might expect stocks to end the year at a loss… especially when you take into account the seven-year-old bull market. But history tells us the market could still post gains for the year.

Stocks aren’t doomed because of a weak start to the year. There are plenty of reasons to be cautious about stocks today. But a weak January is not one of them…