After several relatively orderly down days that began last Monday with a bang, panic is beginning to creep in around the edges. China’s stock market unleashed a fresh round of global turmoil Thursday, diving more than 7% in just 30 minutes before breakers kicked in and halted trading. Geopolitical events are not helping matters, with Saudi Air Force planes reportedly striking Iran’s Yemen embassy. Oil, in particular, remains under tremendous pressure.

It’s important that you don’t give in to the market sell-off – that’s what Wall Street’s big boys want.

It’s YOUR money that matters most – how to make it and, just as importantly, how to protect it.

Today we’re going to make sense of the headlines by taking a look at what you’re not hearing at the moment – including a quick look at why the market sell-off could be a monster buying opportunity!

As usual, I’ve got a recommendation you can add to your portfolio immediately to capitalize on the chaos.

Sell If You Have To – But Only for the Right Reasons

After Thursday’s market close, the S&P 500 was down 4.7% for the week, while the Dow had shed 5.2%. Naturally, emotions are running high.

Still, don’t reach for the “sell” button reflexively. That never ends well – not for you and certainly not for your money.

You see, big sell-offs have a habit of stopping when most investors least expect it. Worse, having sold in a panic, they’ve now got an even bigger problem… getting back in.

I’m bringing this up because one of my favorite indicators suggests that last week’s sell-off could be a monster buying opportunity.

The Bank of America Global Breadth Indicator measures the percentage of global markets trading under 50- and 100-day moving averages commonly used as institutional benchmarks for program trading. As such, it’s a great way to measure overreactions in today’s highly linked global markets.

Right now, 88% of global markets are under those key measures – and here’s the exciting part – that’s consistent with other buying opportunities. 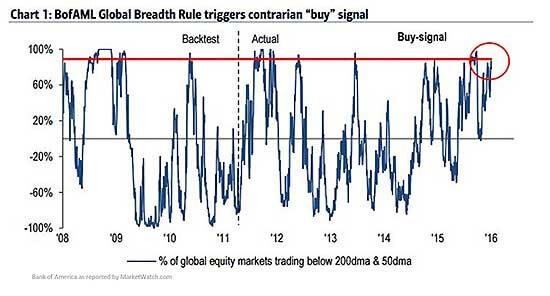 Never forget something we talk about all the time.

It’s one thing to sell when it’s part of a disciplined process using trailing stops or other risk management tactics we talk about frequently, but absolutely the wrong thing to do if it’s just based on panic or some sort of emotional input. Emotion costs individual investors hundreds of percentage points in lost returns even during the best of times.

Even though most investors think only about losses, in reality, the far more costly “loss” is the missed opportunity that comes from standing aside on a knee-jerk reaction. Especially when the markets misfire like they did last week.

Lower prices are almost always something to celebrate when the dust settles.

Most of the big quality companies we talk about all the time are being put on sale for reasons that have little or nothing to do with their underlying business models and even less to do with-rock-solid balance sheets and huge cash reserves.

Choices like Raytheon Co. (NYSE: RTN) and Elbit Systems Ltd. (Nasdaq: ESLT) are best in class when it comes to defense, for example. Oil, single-use medical supplies, technology… every asset class has winners if you know what to look for and have the right perspective.

Speaking of which, let’s sort out the headlines.

Unfortunately, the headlines racing around the Internet are not giving you anything close to the truth, nor are they tying the news together in a way that would tell rattled investors what they need to know.

There are actually three key influences, each with its own role and linkage to global markets…

China’s coming unglued and the fear is not so much that their economic machine is slowing, but whether or not they have their markets under control. That’s an exercise in irony if I’ve ever heard one, considering that the West loves to lambaste them for having things under “control” in the first place. Yeesh!

But here’s what makes China so prickly.

At least 81% of the more than 200 million retail investors in China trade at least once a month. Many have never even graduated from high school. They are generally far more superstitious and demonstrate behavior more consistent with gambling than investors in the West. Some of that’s cultural, but most of that’s simply due to a lack of experience.

People forget that Chinese retail investors have really only come into their own over the last decade. Compounding things is the fact that less than 2% of Chinese stocks are owned by foreigners, so they’re going to be FAR – and I’m talking orders of magnitude here – more volatile than most people are prepared to deal with.

That stands in stark contrast to the United States, Europe, or Japan, where more than 50% of investment activity is institutional and there is huge foreign ownership.

At the same time… China’s currency, the yuan, is actually the third or fourth most liquid currency in the world, depending on your data source. What that means is that it’s closely linked to traditional currencies even though it remains a partially blocked monetary instrument. This is why the markets hiccup every time Beijing “adjusts” it.

All this means that the repercussions here are as much about global leverage there as they are about a headline-making drop in the Shanghai or Shenzhen markets. Further, unless investors have been involved with high finance over the past 30 years in global markets, they wouldn’t have any incentive to put two and two together. That’s why it’s all but invisible to news anchors, reporters, and millions of individual investors.

Investors are dumping anything that smells like risk. Oil’s obviously a big part of that, and this is where fears about a global slowdown actually come into play.

Unfortunately, I don’t think the selling is going to stop for a while yet. In fact, I still believe that oil will hit $20 to $25 a barrel, a price point I first called out late last summer. The bears are firmly in charge and we’re in the neighborhood with each new downtick.

Right now the United States is still producing, Russia’s still producing, and countries like Saudi Arabia HAVE to produce just to keep the lights on, even though prices are so low that they’re literally bankrupting themselves. That’s going to give us a huge overhang and, until we work through that, we’re going to see selling.

Yes, the Fed. The U.S. Federal Reserve paid forward valuations many times over with trillions of dollars in stimulus. The excess is simply working its way out of the system right now. That sounds scarier than it actually is.

Right now the markets are all about psychology. The underlying economic fundamentals, while a long way from perfect, are a lot better than the tailspin suggests. For instance, the U.S. economy will probably grow around 2% to 2.5% this year while global markets may tack on about the same.

That means there are plenty of companies growing earnings, which, in turn, ultimately grow prices. And quite handily at that, over time.

The multiple market dislocations we saw this week are the kinds of moves that define who you are as an investor. I say that because too many investors find out the hard way when the markets go against them that they are speculating, not investing.

That’s an important distinction because investors can handle a few hundred points to the downside with no problem thanks to proper risk management and good stock selection. Speculators can’t.

The irony here is that most people are focused to the downside because they don’t want to lose on big down days when the far more expensive proposition is foregoing upside opportunity.

The way I see things at the moment, this is your “Templeton moment.”

What I mean by that is that you’ve got the opportunity to buy some really terrific companies at bargain basement prices right now, just like Sir John Templeton did in 1939 on the eve of World War II under very similar market conditions.

In case you’re not familiar with the story, here it goes. Sir John is widely regarded as one of the greatest investors of all time.

In 1939 – on the eve of WWII, when the world was going to hell in a handbasket – Templeton famously borrowed $10,000 to buy shares in every company trading on the NYSE for under $1, some 104 companies in all, including 34 that were bankrupt. A few years later, he banked huge gains on all but four when he sold.

Templeton would go on to refine his investing approach over the years, but he never failed to build extraordinarily profitable positions based on the very simple premise of buying into points of “maximum pessimism.” He was so successful that every $10,000 invested with him in 1954 was worth more than $2 million in 1992 when he sold the Templeton Growth Fund.

That’s why he took every opportunity to go on the offensive even in the face of overwhelmingly negative market sentiment.

Now, when we began our time together, I said I’d give you a recommendation poised to profit from all this.

Try Pfizer Inc. (NYSE: PFE), which is not only a strong play in volatile markets, but also poised for significant growth. The stock has dropped 6% from its peak last December, even though the company’s last earnings report showed revenue growing 6% operationally – an impressive feat since its most audacious buyout ever – the $160 billion acquisition of Allergan – has yet to really pay off for the company.

“Yet” is the operative word here.

Allergan’s Botox treatment alone is expected to bring in $2.4 billion annually for the company. Meanwhile, the acquisition means huge tax savings for the company, dropping its tax burden from 24% to 18%. That’s especially attractive because most companies pulling off major acquisitions face the risk of becoming bloated; even though they have higher revenue, they have higher operating costs as well. Pfizer has become leaner in all the right ways.

The last time market headwinds dragged down Pfizer temporarily was last August, when Black Monday created an entry point that rewarded investors who moved on it with a 12% gain from Pfizer in just six weeks. I expect a similar pattern to play out this time around. But despite the potential for quick double-digit gains, Pfizer could represent a great opportunity for a longer-term hold as well.

And this brings me to my favorite part. The company’s yield is a compelling 3.82% at the moment.

The company has raised dividend payouts by 60% since 2010, so there’s clearly momentum that income-oriented investors can seize. And with the company tapping into two of our Unstoppable Trends, medicine and demographics, I think this week’s entry point may prove especially profitable for savvy investors with the right perspective.