Emerging markets are sold on the premise of getting in on the ground floor of the next big thing and making a killing: the United States 100 years ago, China 25 years ago.emerging-market investments

But as someone who has spent a great deal a time between the Tropics of Cancer and Capricorn – where many putative emerging markets are located – I’ve arrived at a painful conclusion: It really is easier for a leopard to change its spots than for a country to change its ways.

[ad#Google Adsense 336×280-IA]Sure, the potential is always there, and so is the culture that prevents the potential from being realized.

This intractable problem is conveniently glossed over in the investment sales literature.

There are always exceptions, of course, most notably Singapore and Hong Kong.

Singapore was fortunate enough to be led for many years by Lee Kuan Yew.

Yew refused to let Singaporeans vote themselves into poverty, as so many emerging-market democracies are prone to do.

Hong Kong, while still a British colony, was led for many years by Financial Secretary John Cowperthwaite. A free market advocate, Cowperthwaite refused to let government bureaucrats collect economic data for fear they would advocate for policies that would derail Hong Kong’s growth trajectory.

Yes, you could argue that China has emerged, but I could argue that it really hasn’t. It’s no secret that few people trust Chinese government statistics on economic growth. And how much of China’s growth is a product of legitimate market-directed activity is debatable.

After all, China has given us a novel asset class – the “ghost city” where no one lives or works. Buildings are left unoccupied because no buyers exist or no one wants to accept tenants because tenants lead to depreciation. Better to save the building and sell it to the greater fool at a higher price.

Many markets have been tethered to the emerging adjective for years, if not decades, to no avail. I write this from Rio de Janeiro. I can attest firsthand to Brazil’s inability to fully emerge, something it has been trying to do for the past 35 years.

Mention Dilma Rousseff, Brazil’s socialist president, to anyone in the producer class, and you’ll receive an earful of invective. Without exception, they view the democratically elected Rousseff as an unmitigated disaster.

But disasters should be expected. When times are good, Brazil’s politicians raise their stake in and their take of Brazil’s output. The voters are hooked on the bait of unending riches coming at someone else’s expense and then vote themselves poor all over again. To spend money on a 2016 Summer Olympics Brazil can’t afford is not only immoral, it’s criminal.

With other countries, it’s a matter of corruption and an inability to habituate free-market concepts. A few years ago, the African countries north of South Africa were set to emerge. The perception was that tyranny was abating and property rights were emerging. Investment boomed and economies were reporting growth at rates two or three times that of the United States.

How has an investment in Africa worked out now that perception has given way to reality? If we go by the Market Vectors Africa ETF (NYSEArca: AFK), not well. The fund is down 56% since its 2008 inception.

If misery loves company, then Market Vectors Africa investors have plenty of shoulders to cry on. Company is kept with both established and new emerging-market investors. 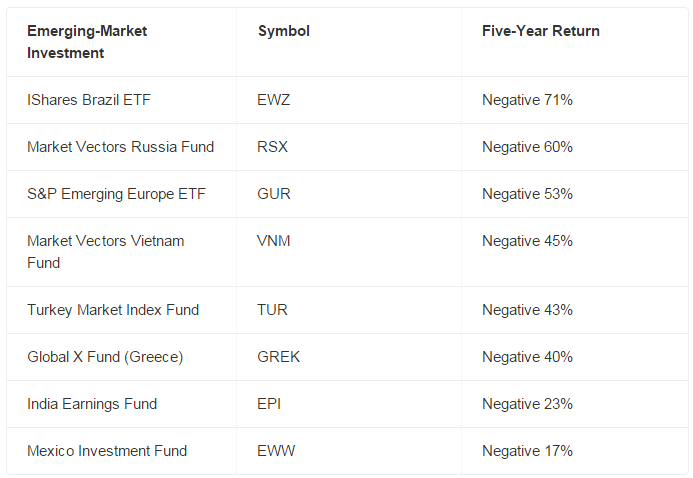 Ironically, many of these emerging-market investments might offer a return that’s worth the risk for a trade (these are never permanent investments) after the sell-off. Rarely, though, are they worth the risk when they are initially floated on an armada of hype. Until you see a leopard change its spots, steer clear of the hype.