Last month, we looked at the Commitment of Traders (COT) report. It shows the positions (long or short) of the largest gold traders – the merchants, miners, explorers, and bankers in the gold business.

The short position in gold is almost always a positive number – meaning that commercial traders are usually short the metal. That makes sense, since most commercial short positions are hedges against future declines in price.

[ad#Google Adsense 336×280-IA]But when commercial traders expect the price of gold to increase, the COT short interest often drops to less than 50,000 contracts.

This almost always leads to short-term rallies in the price of gold.

The most recent COT report, which includes data through December 15, showed that commercial traders’ net short position in gold is less than 6,000 contracts.

That’s the lowest level in more than 15 years.

It’s the end of December. Gold almost always rallies this time of year.

You see, the gold price often bottoms the week before Christmas. Then it rallies through the new year. The table below shows the details. 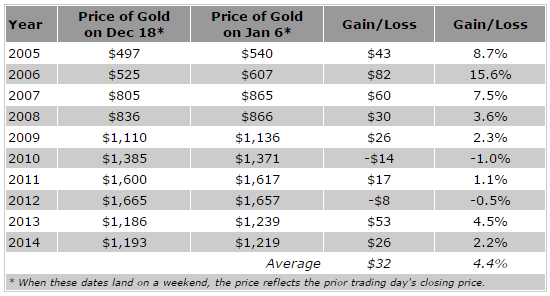 Buying gold on December 18 and then selling it on January 6 would have been profitable in eight of the last 10 years. Gold rallied an average of 4.4% during this seasonally bullish period.

This is a strong seasonal pattern. And with commercial traders’ net short interest at such a low level, we now have two reasons to speculate on gold.

On December 18, the price of gold closed at $1,075 per ounce. As of Tuesday, it was trading for $1,070. So the metal is down a few dollars so far in this seasonally strong period. If the historic trend for this time of year plays out, then gold could play catch up over the next few sessions.

Even an average return of 4.4% would have gold trading $50 higher by this time next week.

That may seem like a lot to ask for. But history is on our side. And the smart money has been buying.