NOW is the time to buy.

Last week, I told you stocks were gearing up for a year-end rally.

December is typically a strong month for stock prices.

Many folks have given up on the idea of a year-end rally.

Don’t be one of those folks. We could see an explosive move higher in the next two weeks…

Friday’s action pushed a lot of technical indicators into extremely oversold territory. For example, take a look at the NYSE McClellan Oscillator (NYMO)… 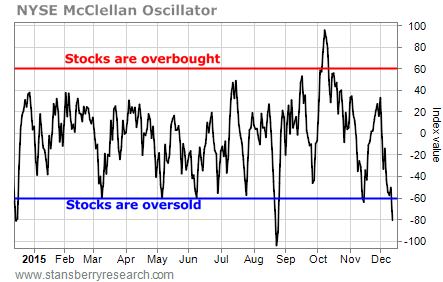 On Friday, the NYMO closed at -80. That’s the second-most-oversold level of the year. The lowest reading occurred in August, just before the S&P 500 rallied 6% in one week. The S&P 500 also rallied 6% in about two weeks last December after the NYMO dropped to -80. 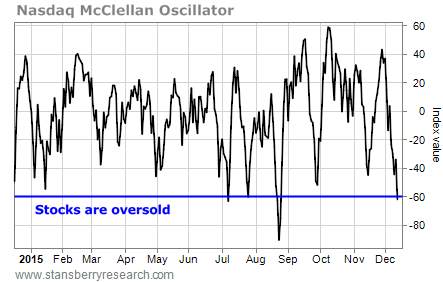 On top of this, the Volatility Index (VIX) – the market’s fear indicator – closed Friday above its upper Bollinger Band. Take a look… 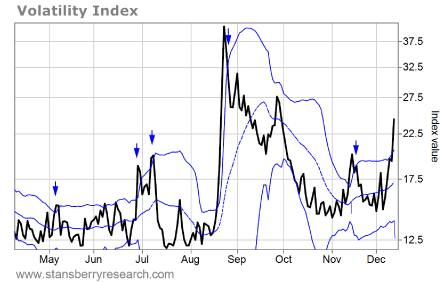 Bollinger Bands help to define the most probable trading range for a stock or an index. When a chart breaks outside of that range, it indicates an extreme move – one that is likely to reverse, at least in the short term.

The VIX closed well above its upper Bollinger Band on Friday. The blue arrows on the chart show the previous times this year that the VIX has been in a similar condition. Each time, the VIX dropped back inside the bands within a few days. And that action has always triggered a short-term rally in stock prices. 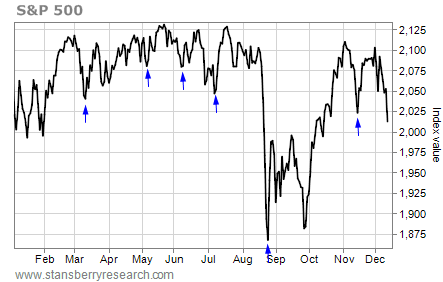 As you probably know, my longer-term outlook for the stock market is bearish. I suspect the S&P 500’s May high will prove to be the top for this aging bull market. And 2016 will be a tough year for stocks.

But in the short term, I’m bullish.

Stocks tend to rally in the second half of December. And we now have the type of extremely oversold conditions that typically occur before a strong stock market bounce. Now is the time to buy.