From December to April, a crazy thing happens in Japanese stocks…

December, in particular, is the biggest month for large gains…

Going back to 1975, Japanese stocks rallied by a larger amount in December than any other month. Take a look… 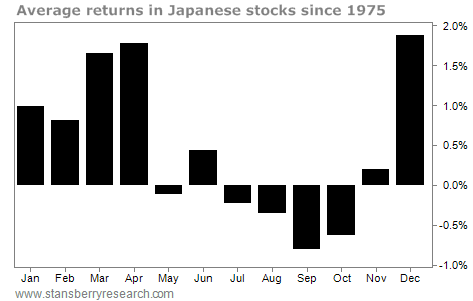 It’s easy to see that December tends to be the best month for a stock rally, with nearly 2% average gains.

[ad#Google Adsense 336×280-IA]We wondered what the returns would have been if you’d simply bought Japanese stocks on December 1, and sold them on April 30, over the last 40 years.

The numbers are pretty incredible.

As a frame of reference, Japanese stocks haven’t done THAT well overall since 1975… Japan’s TOPIX Index is up about 4% a year over the last 40 years (in Japanese yen terms).

However, the compound annualized gain on the TOPIX Index in the five months from December through April is 16.9%. That’s great!

Meanwhile, in the seven “bad” months – from May 1 through the end of November – the TOPIX has a compound annualized loss of -4.2% a year.

Here’s a simpler way to see it:

We are now in December… The start of the sweet spot.

So far, the TOPIX Index is off to a bad start. However, NOW is the time, based on “seasonality,” to own Japanese stocks. They perform their best over the next four-and-a-half months.

Seasonality, by itself, isn’t enough of a reason to get me to own Japanese stocks. But Japanese stocks are a pretty good value today, relative to their own history. And they’ve done better than U.S. stocks this year.

We actually own Japanese stocks in my True Wealth newsletter, through an exchange-traded fund (ETF).

We have a lot of things going for us… value, outperformance, and now seasonality…

If you’re looking to diversify some of your investments out of U.S. stocks, Japanese stocks are a good choice today…