Stocks have soared since we came out of The Great Recession in 2009 – they’re up six years in a row.

After a great run like that, there’s no way that stocks could possibly continue higher… right?

In the last 35 years, stocks have performed fantastically coming out of big recessions.

Based on what has happened the last few times around, we could see bigger gains ahead in stocks.

Let’s take a quick look at what happened to stocks AFTER the last few big recessions.

I think you’ll be surprised at what you see…

Stocks bottomed out during the recession in late 1990. Then they soared for the rest of the decade. 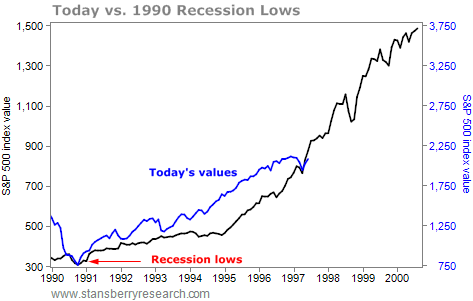 The message from this chart is simple…

Stocks today have gone up a lot since their 2009 recession bottom… but if they happen to follow the 1990s’ path, they could go up a lot more.

Stocks bottomed in the recession in 1982… and then they soared (for the most part) for the rest of the decade. 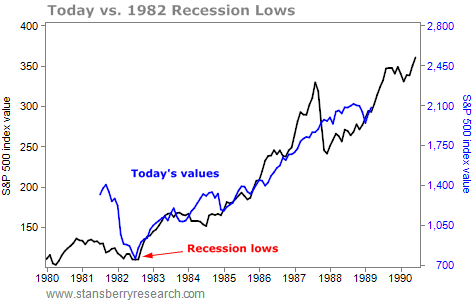 The gains have been surprisingly similar so far, as you can see.

So… we just looked at the 1980s… and the 1990s before that… What happens if we look at stock prices over both decades together? 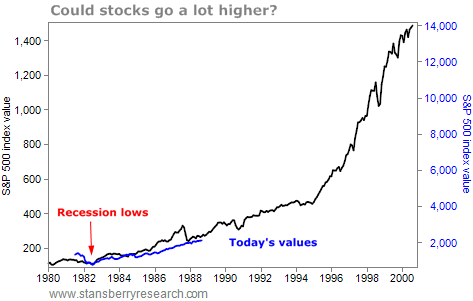 Yes, stocks have gone up a lot since the recession bottomed in 2009. But what has happened to stocks this time around is no different from what happened after the last two big recessions.