It’s almost time to buy into the broad stock market…

[ad#Google Adsense 336×280-IA]But that seasonal strength usually doesn’t kick in until the second half of the month. The first half tends to be weak.

Many traders who have been around for more than a few Decembers know the best strategy tends to involve buying into oversold conditions during the first half of the month in anticipation of solid gains in the second half.

That strategy worked out well for us last year when the S&P 500 sold off 5% in early December. Then it came roaring back and gained 6% by Christmas.

I expect we’ll get a similar opportunity this year. But we need to see some oversold conditions develop first…

Tuesday’s broad stock market decline helped push a few technical indicators close to oversold levels. But it’s going to take another day or two of declining stock prices to get them there.

For example, look at this chart of the NYSE McClellan Oscillator (NYMO)… 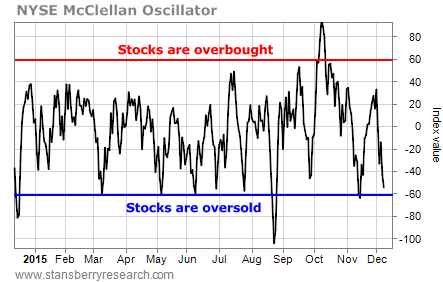 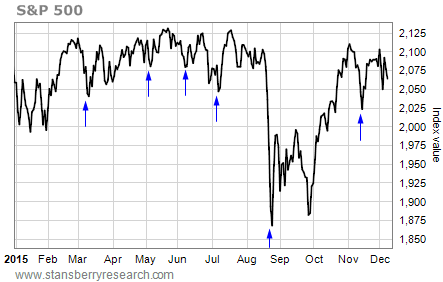 In every case, extreme oversold readings on the NYMO marked at least a short-term bottom in the stock market, and led to an immediate rally.

The NYMO closed Tuesday at -54. So we still need a bit more downside action before we have an extreme oversold setup. I expect we’ll get that in the next day or two.

Remember, next week is the December Federal Open Market Committee (FOMC) meeting – with the announcement on interest rates due Wednesday afternoon. Stocks tend to rally the day before and the day of the announcement. But they tend to fall a few days before.

With any luck, we’ll get oversold readings on a few technical indicators like the NYMO. And that will give traders a chance to buy into the market in anticipation of a Christmastime rally.