I’m a huge fan of being frugal and living below your means.

It’s a lifestyle that has provided tremendous benefits for me, allowing me to save a lot of money and invest that excess cash flow.

That excess cash flow – that capital – has been the backbone behind the real-life, six-figure portfolio that I now own.

Said another way, you can’t buy stocks with capital you don’t have. It’s long been said that you need to have money to make money, and that’s true to a large degree.

[ad#Google Adsense 336×280-IA]But I’m not recommending just being frugal when it comes to deciding what kind of food you eat, what kind of car you drive, or what kind of home you live in.

I’m also recommending to be frugal when it comes to buying stocks.

One can be a frugal investor.

And it works just like being frugal with anything else.

You want to be prudent when it comes to getting a good value for your money.

You want to make sure you’re getting quality and value for the price you pay, and you want a good deal. You want to be cautious with your money.

You know as a consumer when something is a good deal. Right?

You know that spending $50 on a steak – even if it’s really good – is probably a little wasteful.

And you know that buying a reliable, used car in excellent condition with low miles that’s priced 25% below book value is probably a pretty good deal.

Well, it works the same for stocks.

In fact, it works even better for stocks.

That’s because we have systems in place that are designed to work to our advantage, giving us a reasonable idea of what stocks are intrinsically worth.

See, price is what you pay. It’s just a number that tells you how much cash you have to fork over for something.

But intrinsic value tells you what something is actually worth. It tells you whether or not that price is a good deal or not. It gives relativity and context to price. Without value, price is practically meaningless.

One such system that’s easy to use (and freely accessible for you readers) is discussed by fellow contributor Dave Van Knapp.

That system, however, is specifically designed to work well with dividend growth stocks.

Stocks like you’ll find on David Fish’s Dividend Champions, Contenders, and Challengers list, which is a compilation of more than 700 US-listed stocks that have all increased their dividends for at least the last five consecutive years.

I personally invest in dividend growth stocks – and for good reasons.

Buying stock in a company means you own a slice of a real business. And that real business should produce real profit after selling real products and/or services to real people. As an owner, then, I expect my fair share of that profit.

Dividend growth stocks provide me with just that. When I buy a dividend growth stock, I’m buying equity in a company that has a penchant for and track record of rewarding shareholders with growing dividends, which are paid out of growing profit.

When you have been paying growing dividends for 30 or 40 years straight, that only happens because you’re doing some incredible things as a business.

But I don’t just buy any dividend growth stocks at any price.

Just like with anything else in my life, I don’t want garbage.

But I also want that good deal.

I want to pay less than it’s worth. So I only try to buy high-quality dividend growth stocks when the price is below fair value.

You have less capital at risk when you buy undervalued stocks. And you have more upside as well, if the stock is repriced closer to what it’s actually worth.

Moreover, all else equal, yield and price are inversely correlated. When a stock’s price drops, its yield naturally rises. So that’s more income for the same amount of money.

And that additional yield increases your potential long-term total return, as does the potential capital gains built in when you underpay.

As such, you can imagine why I’m always on the hunt for high-quality dividend growth stocks that are priced less than intrinsic value. The bigger the spread, the more enthusiastic I become.

Well, I recently stumbled upon one such stock!

Viacom, Inc. (VIAB) is a global entertainment and media company, connecting with audiences in over 165 countries and territories.

Viacom owns some of the most popular cable networks, including Nickelodeon, MTV, VH1, Comedy Central, and CMT.

They also own America’s oldest film studio in Paramount Pictures. Paramount continues to produce modern-day hits like the Transformers series and the Star Trek reboot.

And while cable television appears to be in a slow, secular decline as consumers (especially those in younger demographics) consume more short-form content online, Viacom also owns more than 1,000 websites, which allows them to continue connecting with audiences while also offering cross-promotional opportunities.

Now, Viacom doesn’t have the lengthy dividend growth streak I usually look for. They’ve only been increasing their dividend to shareholders for the past six consecutive years.

That’s a drawback, but the company does make up for it in a number of other ways.

Over the last three years, the firm has increased its dividend at an annual rate of 16.3%. And with the most recent dividend raise coming in at over 21%, there doesn’t appear to be a marked slowdown there.

Currently offering a mouth-watering yield of 3.32%, that’s well above the broader market.

Furthermore, and more impressively, that’s almost twice the 1.7% yield this stock has averaged over the last five years.

Viacom is paying out just 37.6% of its earnings in the form of a dividend, which leaves plenty of room for future dividend raises. It also means the dividend is pretty sustainable, even if profit come under temporary pressure.

But without underlying operational growth, the dividend will naturally be limited in terms of growth as well.

How does Viacom stack up there?

I usually like to look at 10-year financial data, but Viacom (in its current form) hasn’t been operating that long. So we’ll instead look at the last five years.

Fortunately, Viacom is such a business.

Largely through extensive share repurchases (the outstanding share count is down by approximately 27% over that five-year stretch), the company grew earnings per share from $2.65 to $5.43 over this period. That’s a CAGR of 19.64%.

I wouldn’t expect that kind of EPS growth moving forward, even with strong repurchases, but that does go to show what Viacom is capable of even with revenue that isn’t moving. Thus, any increase in revenue can improve things even further.

S&P Capital IQ believes Viacom will compound its EPS at a 12% annual rate over the next three years, which, while not what the last five years have proven out, is rather outstanding.

The growth picture here is strong. However, that is offset somewhat with a heavy debt load.

Viacom’s long-term debt/equity ratio is 3.40%. And their interest coverage ratio is below 9. Neither number is particularly great, and the balance sheet has deteriorated pretty steadily over the last five years. So this is something to be mindful of.

Profitability, however, is a strong suit for Viacom. Many major media companies sport excellent margins and returns, and Viacom is no different. It’s just a great industry to operate in, all in all.

Over the last five years, the company’s net margin has averaged 15.80% and their return on equity has averaged 32.32%. I view these numbers as great both in absolute and relative terms. Although, the ROE is juiced by the leverage.

I see some pretty solid fundamentals here. The yield is juicy, the dividend is growing rapidly, and the company appears poised for continued growth.

Perhaps that’s what Warren Buffett sees in the stock – it’s a holding for Berkshire Hathaway Inc. (BRK.B). So buying Viacom would put you in pretty good company.

But is the price right?

The P/E ratio for VIAB sits at 11.32 right now. This is after the stock has dropped more than 35% YTD on concerns over the broader business model and moderate subscription losses reported by competitors. Compared to the five-year average P/E ratio for this stock, 14.1, that’s incredibly low. Moreover, that’s almost half the broader market’s P/E ratio. And as mentioned earlier, the current yield is almost twice its five-year average.

Seems cheap, but how cheap? What’s the intrinsic value?

I valued shares using a dividend discount model analysis with a 10% discount rate and a 7% long-term dividend growth rate. I think that growth rate is pretty moderate considering the low payout ratio, historical dividend growth, and forecast for growth moving forward. But I’m being a little cautious here due to long-term uncertainty regarding subscriptions. The DDM analysis gives me a fair value of $57.07.

So I think we definitely have a deal here on a quality dividend growth stock. This could be just what a frugal investor is looking for. Even better, my opinion is shared by some major professionals that have taken the time to analyze and value this stock.

Morningstar rates VIAB as a 4-star stock, with a fair value estimate of $63.00.

I came in on the low end, and even my figure means this stock is a deal here. Averaging out the three figures (so as to come to some kind of consensus) means this stock’s intrinsic value can reasonably assumed to be right around $62.69. I think that’s a fair assumption. And that would mean this stock is 30% undervalued. 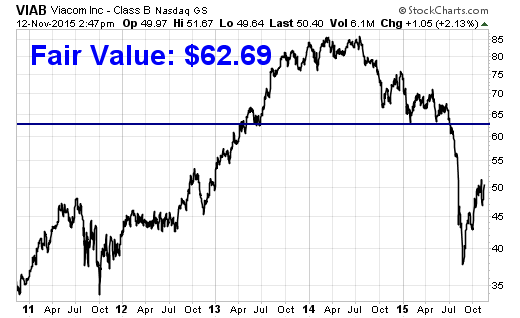 Bottom line: Viacom, Inc. (VIAB) is a Buffett holding that’s offering a yield about twice its five-year average and the potential for 30% upside. Although cable subscriptions appear to be in secular decline, Viacom owns some of the best networks. In addition, they’re diversified into new media and motion picture production. Although I think there are some risks here, the dividend is well covered and the upside indicates a strong margin of safety. This stock is worth a look for frugal investors out there.